After a solid decade of pursuing Industrial IoT-enabled business process improvement and innovation, the value of the industrial network edge tier within digitally transformed architectures is now widely recognized.  Originally viewed as the point where IT and (increasingly) cloud-based applications intersect with the OT environment, the edge functional definition continues to evolve in important areas such as edge-to-cloud integration, edge compute, and the convergence of IT, OT and security.

Connectivity requirements continue to escalate as data-hungry analytics and other enterprise applications demand reliable, pervasive information from OT assets, processes, personnel, and other components. Application requirements in key areas, such as latency, security, and on premise execution, are placing further emphasis on edge capabilities.

As this evolution continues, the role of the various edge components also evolves. This includes expanding compute and store capabilities in what ARC calls “thick edge” devices, as well as ongoing convergence of IT, OT, and security at the network-centric “thin edge.” Combined with the expanding capabilities of high-end endpoint devices, including increasingly mobile and autonomous devices such as robots and AGVs, the choices of where to do what at the Industrial IoT edge continue to expand.

Customers pursuing digitally enabled business improvement strategies understand the need for deeper and more extensive connectivity throughout the enterprise. Cloud-based solutions for analytics, machine learning, new service-oriented revenue streams, and other applications need data from assets, processes, personnel, and automation and control equipment resident at the edge to generate meaningful business value. This reality has led to widespread industry recognition of the importance of the edge in achieving desired business outcomes.

Edge capabilities are necessary to enable the full spectrum of connected products, processes, and services and provide rapid time-to-value. Edge functionality is relied on for important tasks such as reducing response latency when sending data to the cloud and insulating clouds from the “data deluge” driven by the ever-increasing volume of data available in edge devices.

Edge devices play a critical role in supporting the OT environment by providing integration with, and insulation from, higher levels of the architecture. This is manifested in ways such as support for northbound and southbound connectivity and OT-friendly visualization and security.

The industrial network infrastructure portion of the Industrial IoT edge is the flashpoint for delivery and, increasingly, conversion of data and information between physical assets and processes to digital transformation applications. Ongoing improvements in network performance, fueled by both standardization and innovation, along with an escalated emphasis on integrated operational security, are furthering the dynamic nature of this tier of the architecture.

This results in divergent functional emphases for the various categories of industrial edge devices resident at the network infrastructure tier as well as careful consideration of where IoT functionality should reside. What ARC calls “thick edge” devices, such as IPCs, gateways, and routers with significant compute and store capabilities, are increasingly focusing their emphasis on edge-to-cloud integration and edge compute.

Activities at the thin edge, where network-centric devices such as industrial Ethernet switches (IES) reside, remain focused on operational priorities, such as network performance and reliability, while increasingly pursuing IT/OT convergence – particularly as it relates to integrated security. Availability of increasingly powerful endpoint devices with IoT functionality of their own further confounds the choice of where to do what within the industrial network edge. 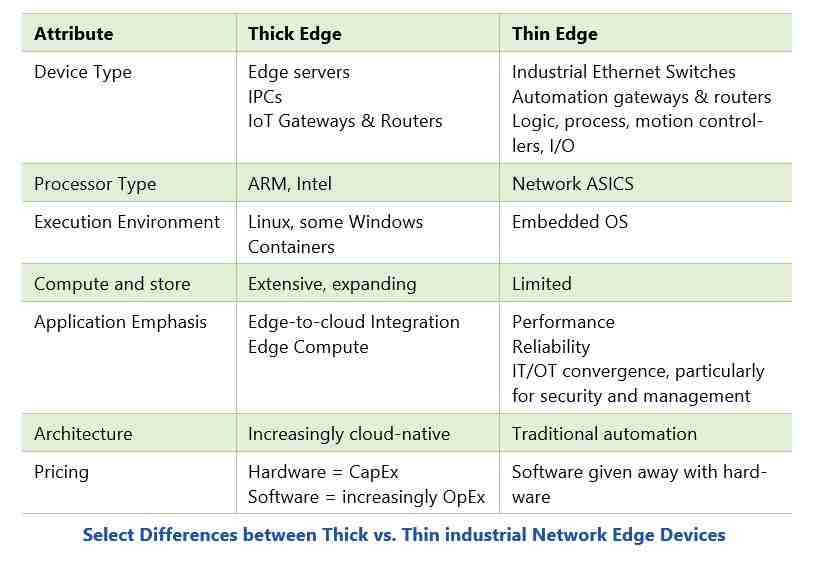 Traditional digital transformation use cases in areas such as asset management, production optimization, and predictive maintenance continue to be pursued, but impactful new applications are emerging in product and service innovation, competitive excellence and differentiation, and response to “new normal” pandemic-driven business conditions. Examples include emerging use cases such as enhanced field operations, connected remote experts, personnel tracking, safety, and logistics and supply chain. The advent of 5G and private wireless are likewise enabling step-changes in innovative use cases, particularly for mobile, autonomous, and remote assets and operations that in turn drive increased edge requirements.

New installations increasingly leverage emerging solutions such as AI/ML, AR/VR, video, analytics, and digital twins in pursuit of these ends. Preprocessing for these applications at the edge addresses the necessary response times and computational requirements, particularly for operational and safety applications that generate immediate output rather than being relegated to off-line processing.

This updated analysis re-confirms the roles of thick versus thin components of the digitally transformed edge in the context of these requirements. Thick edge devices are largely focused on edge-to-cloud integration and edge computing capabilities, while IT/OT convergence related to cybersecurity integration and centralized management capabilities are more prominent at the thin edge.

Digitally transformed enterprises have more opportunities to distribute functionality throughout the architecture because IT, cloud-native technologies, and IP-based networking are descending closer to the edge. Enterprise cloud architectures are likewise descending to the edge in pursuit of their primary data sources and to overcome the limitations of cloud execution, particularly regarding latency.

Data processing at the edge reduces cloud service fees for data-intensive installations and can address concerns about deployment, scale, and management complexity of cloud-based solutions. The edge tier can also be used to generate, access, and process data that is too difficult, too expensive, or slow to access, or to bypass control system architectures and send data directly to the cloud.

Analytics are one of the “killer apps” for edge computing due to their ability to deliver concrete business outcomes in areas such as reduced machine downtime and maximum asset utilization. This pursuit has extended into related functionality associated with AI, AR/VR, machine vision, and video analytics. Extensive data pre-processing and reliability requirements, as well as the need for on-prem output, are pushing execution of these applications to the edge.

Analytics, video, machine learning, and similar applications require significant data collection and compute power that makes direct integration with enterprise clouds prohibitive from the perspective of both cost and performance. The resulting escalation in edge compute and store requirements is driving this functionality into the thick edge, including IPCs, edge servers, and Industrial IoT gateways and routers.

Industrial IoT gateways and routers, for example, have evolved from their traditional role in serial-to-Ethernet conversion to platforms for IT/OT convergence, edge-to-cloud integration, and edge computing. Standardization on IP-based wireline and wireless networks is eliminating the need for hardware-based protocol conversion, particularly in new installations, and driving container-based application layer protocol conversion. These devices in turn increasingly incorporate standard CPUs from ARM or Intel, the Linux OS or derivatives, contain larger amounts of memory, and provide software support for containers.

Gateway and router suppliers continue to add compute capabilities to their devices. As a result, the value emphasis in the Industrial IoT gateway and router market has evolved from one based on automation protocol conversion to one more reliant on differentiation via software-enabled functionality and application execution, including edge-to-cloud integration and edge compute.