The sixth edition of the Digital Transformation Council (DTC) Asia webinar titled Creating Business Impact with Industrial IoT was hosted by ARC Advisory Group, India on April 29th. The DTC provides a platform for the end user community to connect, collaborate, learn, and share with peers who are digitalizing and transforming their organizations. DTC members can use the Council’s library, consult analysts, and access the global forum archives for the next three months. Further, the audience was told about the agenda and process to be followed during the webinar. Bob Gill, General Manager, Southeast Asia, ARC Advisory Group introduced the topic and welcomed the speaker, Atul Govil, Chief Transformation Officer, India Glycols. The webinar can be viewed in its entirety here.

In 2015, when Mr. Gill had made a presentation on Industrial IoT, the audience was curious to know more about this relatively new concept. Fast forward to 2021 – Industrial IoT is common parlance, and no explanations are required! But people are keen to know how companies are using IoT to deliver improvements in operational and asset performance to develop connected products and new business models. He gave two examples of how a petrochemical company is using Industrial IoT in Singapore:

Mr. Govil provided his perspective on creating business impact with Industrial IoT from a manufacturing standpoint. He said that many companies still have not deployed IoT and consider it to be a “technology of the 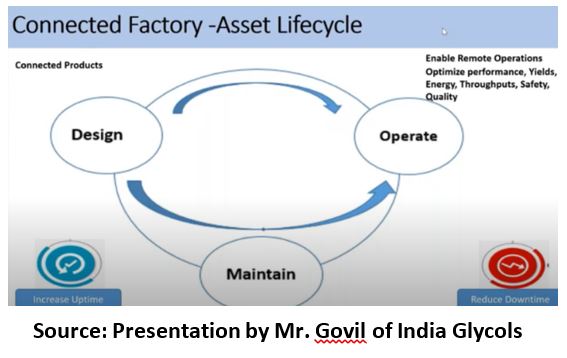 future.” This is because people are reluctant to change from their traditional ways of doing things, and unless they realize the value of IoT, it will be difficult to persuade them to do so. Next, he spoke about India Glycols – a diversified (specialty chemicals, industrial gases, medical oxygen, hand sanitizers, liquor etc.), multi-location company. Industry is not concerned about the jargon, he said, what is of relevance is the end result. Companies are at different levels of IoT maturity, and the focus remains on driving operational efficiencies, cost optimization, and integrating islands of automation. IoT is a confluence of OT and IT, but to that the business domain expertise must be added to contextualize it, he explained. His presentation was about the connected factory, project approach, and two case studies (predictive maintenance and connected factory). Mr. Govil said that all projects should start off with a small pilot so that failure is not “catastrophic.” Pilot trials can be relayed across teams and scaled up.

Next, he spoke about the design-operate-maintenance cycle with reference to connected products and how it enables remote operations, optimizes performance, yields, energy, throughput, safety, and quality. Initiatives need to be prioritized based on the targeted outcomes, he said. The starting point has to be based on historical data and identifying the problem. Then you have to get the right team by identifying the skills and knowledge required and create those change agents for a sustainable project. Data has to be accurate, complete, and timely, he said, giving the analogy of last week’s newspaper, which has no relevance or value. In this context, he spoke about brownfield and greenfield projects and the differing approaches. Analytics help drive faster outcomes, he said, as it makes the workflows and processes more responsive and proactive. Further, he spoke about collaboration between layers and teams, the importance of cybersecurity, and the value of external consultants. He also highlighted change management and the importance of augmenting capabilities and explaining the benefits of deploying new technologies.

Predictive maintenance (under the Maintenance part of DOM) for smart energy, metering, and power monitoring to drive real outcomes. This helped to establish a single system of record with real data visibility for decision support and provided an integrated view of the overall energy resources, costs, asset usage, and maintenance parameters to defined users.

Connected factory: He explained this diagrammatically wherein different control and monitoring systems were linked, the project installation was done on-premises, and the know-how was shared across all units. “It’s like a journey, so processes have to constantly evolve,” he said.

What made India Glycols an early adopter of IoT?

Started looking at different processes, did a detailed review across the value stream, and identified the areas that could be automated. These digital processes improved resilience and drove faster decisions.

How was the IoT team built?

A cross-functional team with the right IT and OT skills was created and a third-party consultant was engaged, and all this was effectively woven together to build the IoT team.

What were some of the project challenges?

Some plants had legacy systems, so getting the data and ensuring interoperability was a huge challenge. Cybersecurity was another area of concern – it had to be built in and not an afterthought.

What are your future plans for IoT in the connected factory?

Projects are ongoing, for a liquor factory, tracking of manpower movement is being done to ensure safety. The next level is to add video analytics to contextualize data.