At the American Clean Power (ACP) offshore wind conference Oct 18 and 19, 2022 in Providence, RI, it was clear the offshore wind industry has gained momentum. The pledge by President Biden of 30x30 (30 GW of US wind power by 2030) and 15 GW of offshore floating wind appears to be on track. Building such a monumental new energy infrastructure is not without its problems and many issues were discussed during the conference.

What are the current challenges?

There is no shortage of competition between states for securing clean wind power offshore in the US and bringing new jobs to their states. Dan McKee, the RI Governor, spoke at the keynote in Providence this year, while MA governor Charlie Baker spoke at last year’s event in Boston. States that are slow to develop projects are finding themselves waiting in the supply chain line and delaying healthy economic growth. In fact, the US as a whole is playing catch up with Europe and China. States are competing for component manufacturing for blades, cables, fasteners, towers, and many other parts and installation tools. The US is learning from the more experienced European offshore wind developers and supply chain, as well as the know-how from the offshore oil and gas industry, for permitting and construction. One of the top competitions is for the location of ports and securing the many special ships that are essential for erecting the huge and heavy offshore wind turbines.

The Bureau of Ocean Energy Management (BOEM) announced the first California offshore wind lease sale at the event in Providence. This will be a Dec. 6 auction by BOEM that is slated for the outer continental shelf in designated wind energy areas beyond Morro Bay and Humboldt. It will be the first lease sale of sea-based wind turbines in the Pacific Ocean. This will be five leases for up to 4.5GW of power. As this is deep-water, these will be floating wind turbines anchored to the sea floor by cables. Floating wind turbines are a relatively recent development although the oil and gas industry has plenty of experience with FPSO (Floating Production Storage and Offloading) platforms and floating drilling rigs, which is helping to bring down costs and make floating wind more competitive.  The ocean of the Atlantic coast has the advantage of the shallow Georges Bank, which allows wind turbines to be mounted directly into the floor of the ocean.

Offshore Wind Development is strongest in the North Atlantic Ocean

Offshore wind resource by state can be seen in this NREL chart. 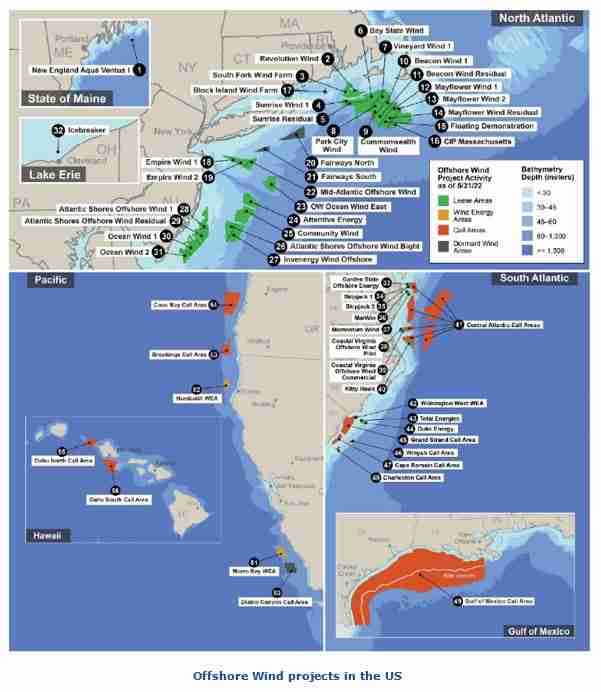 The available wind resources are huge, and this makes offshore wind development one of the few scalable sources of low carbon power that can be relatively quickly implemented.

How is the industry overcoming challenges?

It’s not an easy task to develop a whole new source of electric power at the scale of the new offshore wind industry. This clean wind power would appear to be a perpetual long term sustainable way to provide the electric power the world needs to reduce our greenhouse gas emissions. We have seen more than a century of alternative power sources with coal, oil, gas, hydro, nuclear, solar and wind, but wind power has emerged as the cleanest and lowest cost of power generation. The only thing better than wind is generating “NegaWatts” which means using less energy and power by being more efficient.

One of the early challenges the industry is working to overcome is the Jones Act. This impacted the Block Island Wind Farm off the coast of Rhode Island, the very first US offshore wind project. With a lack of Jones Act compliant U.S. owned and operated vessels, the Block Island developers contracted a vessel from Europe, but the Jones Act meant the ship was prohibited from entering U.S. shores to collect and transport wind turbines, towers, and blades. To overcome this issue, smaller U.S.-flagged liftboats were used to deliver wind turbine equipment out to the site, where they were transferred to the European jack-up vessel, which inevitably increased the cost, complexity, and carbon footprint of the project. 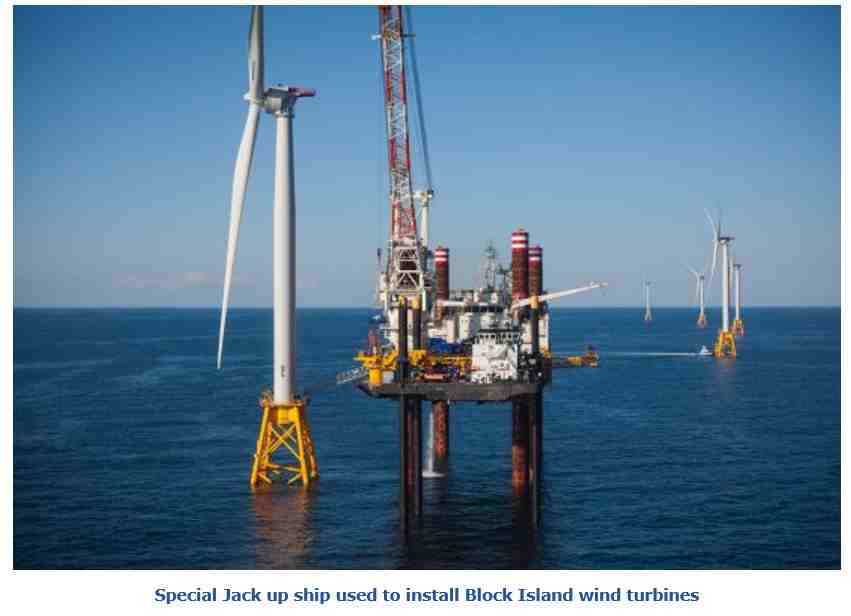 New Jones Act-compliant wind turbine installation jack-up vessels are currently under construction. Dominion Energy has contracted GustoMSC to build the NG-16000X-SJ. https://www.nov.com/products-and-services/brands/gustomsc. This new Dominion Energy vessel has a hull that will measure 144 m by 56 m with a depth of 11.5 m, making it one of the world’s largest jack-up vessels. The jack-up will accommodate up to 119 people, a 2,200-ton main crane, and a 11,500-ton carrying capacity.

What countries are leading the offshore wind commitments?

To put the US offshore wind activities in perspective, the global offshore wind industry in 2021 had a record year for deployment with about 17 GW of new projects commissioned. The installed capacity is now past 50 GW. This growth was largely attributed to China, which installed 13.8 GW. The United Kingdom had the next largest annual deployment (1.9 GW), followed by Vietnam (0.6 GW), Denmark (0.6 GW), the Netherlands (0.4 GW),

According to the US DOE Offshore Wind Market Report: 2022 Edition:

The levelized cost of energy for fixed-bottom projects commissioned in 2021 declined to an average of $91/megawatt-hour (MWh), with a range of $75/MWh to $116/MWh globally. This decline represents a reduction of 4% on average compared to 2020, bringing the total cost reduction to more than 50% since 2014. Some estimates have the  levelized cost of offshore wind energy at $64/MWh on average by 2030 and range between $41 and $48/MWh by 2050.

Record-setting lease auction prices in New York Bight are followed by auction format changes to benefit states and local stakeholders. The $4.37 billion paid for leases in the New York Bight was unprecedented. While signaling strong confidence in the offshore wind energy market, those high lease prices translate to about $763/kilowatt and raise concerns about higher electricity costs from offshore wind. In May 2022, the BOEM auction rules were modified for the Carolina Long Bay auction using multifactor bidding criteria that allow bidding credits to be allocated for supply chain commitments. A multifactor approach is also planned in the next upcoming lease auction in California scheduled for late 2022 that will allow bidding credits for local benefits.

In October 2021, BOEM announced its “Offshore Wind Leasing Path Forward 2021‒2025,” calling for plans to hold up to seven new offshore wind lease auctions including the New York Bight, Carolina Long Bay, Central Atlantic, Gulf of Maine, California, Oregon, and the Gulf of Mexico by 2025 (U.S. Department of the Interior 2021)

Increased fossil-fuel prices have led nations around the world to accelerate the development of renewable energy to mitigate rising consumer electricity costs and strengthen their energy security. On the other hand, increased commodity prices and continued supply chain disruptions threaten to slow offshore wind cost declines or potentially increase costs,

The 2021 ACP offshore conference in Boston last year, gave the message that offshore wind is finally real. The 2022 conference in Providence was  more about the business of making it all happen. This includes the explosion of new leases, state competitions, developers vying for access to ships, wind turbine and cabling supply chains, upgrades to onshore transmission to accept more wind power, and competition for many other resources needed to get turbines installed and get this clean power on the grid.