Dassault Systèmes typically holds its annual Science in The Age of Experience in the Boston area.  This is both because the company’s North American headquarters is in Waltham, Mass. and because Boston is a major global center of education, technology, and science.  This year’s conference was held at the Harvard Medical School, a very appropriate forum for an event that would feature how science affects so many aspects of our lives.

The focus of this year’s event focused on three areas: science for medical, life sciences, and bionics; science for mitigating climate change; and scientific innovation for the future.  The latter included some forecasts and predictions on what we can expect to make significant impacts on society at large.  ​ 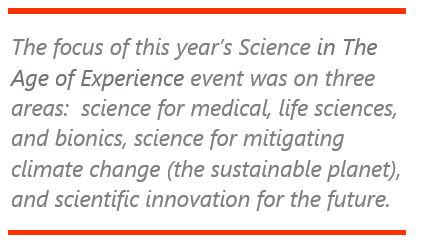 Bernard Charles, Vice Chairman and CEO of Dassault Systèmes introduced the event. Mr. Charles said that the company has been transforming from being primarily a product lifecycle management (PLM)-focused company to a science-focused company for some time now.  Today, Dassault Systèmes’ multiple 3DS brands are dedicated to scientific research and product development.  The company’s advanced 3D simulation tools like SIMULIA, BIOVIA, and GEOVIA were all represented in the various areas of scientific research presented at the event.  Clearly, Bernard is  saying that simulation is at the heart of everything 3DS is doing: simulation across multiple spectrums of the physical world is the implementation of the 3DEXPERIENCE.

The keynote speaker for the first day was Lisa Randall, Professor of Theoretical Physics at Harvard University.  Dr. Randall is an expert on the origins of the universe, gravitational waves, and dark matter.  She focused on how 3D simulation tools help physicists simulate cosmological events on the far edges of the known universe to better understand how the universe was formed.  She has made ground-breaking discoveries in gravitational waves and dark matter formed from the collision of gigantic black holes in the very beginning of the universe billions of years ago.

Dr. Randall presented an interesting take on how theoretical physicists make discoveries about the known universe.  She noted that scale matters when probing the origins of the universe and that humans can lose the perspective of just how enormous the ever-expanding universe is from our tiny island earth.  As a physicist, Dr. Randall maintains that what one observes depends on where you are and intuition is guided by what we can observe.  She points out that humans have only discovered a very rudimentary part of the laws of physics and what we have yet to discover will change humankind.

Science Benefits Humans and the Planet We Live On

Hugh Herr, Professor of Robotics and Human Bionics from MIT research labs, presented the second keynote on The New Era of Extreme Bionics. Dr. Herr, who – as a young man – had both legs amputated below the knee due to severe frostbite suffered in high altitude climbing, walked briskly onto the stage on his bionic legs. These were his own invention and development based on advanced robotics and direct feedback from surrounding muscles using computerized sensors.  His movements were completely natural and human like without any sign of a mechanized effect while walking, jumping, or other natural movements.

Using SOLIDWORKS, Dr. Herr developed a new robotic, computerized prosthesis. This is attached to living muscle that works from direct brain commands.  This enables the wearer to use his or her own natural brain sensory reactions to control movements in the foot and leg protheses.  He prototyped the first prosthesis on a friend that lost a leg in a climbing accident.  This person was able to return to the actual wall where he fell and finish the climb with his bionic leg.  Dr. Herr received a standing ovation from the audience at the conclusion of his presentation.

There were presentations from researchers from the pharma and life sciences industries demonstrating how they use 3DS BIOVIA molecular compounding simulation to develop new drugs in a matter of months, rather than years.

Dr. Jennifer Wilcox, Professor of Physical Chemistry at Worchester Polytech presented on the latest technology used to capture CO2 from the air and from industries.  She illustrated a very quantified view of the technology of CO2 capture, multiple forms of storing and using the CO2, and the cost of the various processes.

A Look at the Future of Science

Dr. Michio Kaku, theoretical physicist, co-founder of string theory, renowned futurist, and author of many books on the subject presented on the future of science and made several scientific forecasts.  Dr. Kaku presented a look beyond the current third wave of technology (age of digitalization) and looked at the fourth and fifth waves of the future. The fourth wave will be the molecular wave spawned by pervasive use of AI, 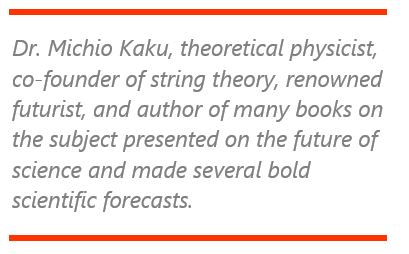 nanotechnology, and simulation at the molecular level. The fifth wave will be the physical world (physics) at the atomic level where we will finally realize fusion-powered energy and move to pervasive quantum computing.  Also in the fifth wave, the Internet as we know it will be replaced by the Brain Net, where humans will be connected at the level of thought and emotions.

At the conclusion of the presentations, the attendees were bused to the MIT research and development labs for a tour of current projects and technologies being developed. Neil Gershfeld, MIT director of the labs, conducted our group through the Atoms and Bits labs where MIT graduate research fellows are conducting some very fascinating and interesting projects.  The labs are referred to as the "maker labs" because projects reflect research focused on real-world applications. The labs are funded by a combination  of industry, academia, and government.

We saw several nanotechnology projects. One focused on using origami mathematics to develop ultra-lightweight and super-strong folded structures for the aerospace industry.  These experimental structures enabled the design of new aerodynamically adaptable wings that could change shape in flight to optimize aerodynamics.  Other projects were around 3D printing for cellular-level nanostructures. Another was the development of small builder-bots that were a part of the structures that they built autonomously, piece by piece.

The Science in The Age of Experience event by Dassault Systèmes has become an annual gathering of some of the best and brightest scientists and researchers in their respective fields.  They present their discoveries, inventions and scientific breakthroughs and an examination of some of the latest scientific achievements that impact industry, business, and society at large.  This conference showcases several of the 3DS brands that enable scientists and researchers to simulate, discover, and develop cutting edge processes, products, and technologies, and brings together some of the best scientists in their fields, enabling Dassault Systèmes to acknowledge and applaud their singular achievements.