A Geographic Information System (GIS) integrates hardware, software, and data for capturing, managing, analyzing, and displaying all forms of geographically referenced information.  GIS allows users to view, understand, question, interpret, and visualize data in many ways that reveal relationships, patterns, and trends in the form of maps, globes, reports, and charts.  A GIS helps users answer questions and solve problems by looking at data in a way that is quickly understood and easily shared, and GIS technology can be integrated into any enterprise information system framework.

A GIS is an organized collection of computer hardware, software, geographic data, and personnel designed to efficiently capture, store, update, manipulate, analyze, and display all forms of geographically referenced information.  GIS technology integrates common database operations, such as query and statistical analysis, with the unique visualization and geographic analysis benefits offered by maps.

The database information (attribute data) is tied to spatial data (feature layers).  An example of this would be schools.  The actual location of the schools is the spatial data.  Additional data such as the school name, school ID, and school type would make up the attribute data.  It is the partnership of these two data types that enables GIS to be such an effective problem solving tool.  By querying the database associated to the layers, the GIS allows users to perform "why" and "what if" scenarios and creates a resulting map depicting a visual analysis.
A working GIS integrates these five key components: hardware, software, data, people, and methods.

Hardware is the computer on which a GIS operates.  Today, GIS runs on a wide range of hardware types, from centralized computer servers to desktop computers used in standalone or networked configurations. 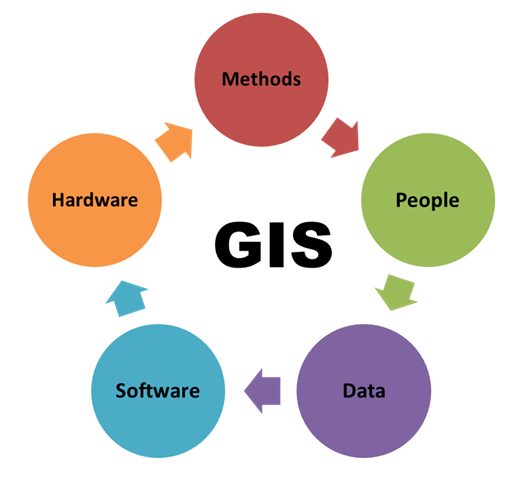 GIS technology is of limited value without the people who manage the system and to develop plans for applying it.  GIS users range from technical specialists who design and maintain the system, to those who use it to help them do their everyday work.

A successful GIS operates according to a well-designed plan and business rules, which are the models and operating practices unique to each organization.

Maybe the most important component of a GIS is the data.  Geographic data and related tabular data can be collected in-house or bought from a commercial data provider.  Most GIS employ a DBMS to create and maintain a database to help organize and manage data.
The data that a GIS operates on consists of any data bearing a definable relationship to space, including any data about things and events that occur in nature.  At one time this consisted of hard-copy data, like traditional cartographic maps, surveyor’s logs, demographic statistics, geographic reports, and descriptions from the field.  Advances in spatial data collection, classification, and accuracy have allowed more and more standard digital base-maps to become available at different scales.

GIS includes maps, vector information, and imagery.  The collection of imagery is commonly achieved through remote sensing.  Remote sensing started with aerial photography in the late 1800's onboard a balloon.  Air-planes were used to collect information from above in the early 1900s, and the first image taken from space was aboard the Apollo spacecraft in 1969.  In the early 1970s the first imaging satellite (ERTS-1) collected imagery of the Earth.  Images continue to be collected from both space and aircraft, and are available for commercial and personal use on the Internet.

The term "remote sensing," first used in the United States in the 1950s by Ms. Evelyn Pruitt of the US Office of Naval Research, is now commonly used to describe the science—and art—of identifying, observing, and measuring an object without coming into direct contact with it.  This process involves the detection and measurement of radiation of different wavelengths reflected or emitted from distant objects or materials, by which they may be identified and categorized by class/type, substance, and spatial distribution.
Remote sensing, the science of obtaining information about objects or areas from a distance, is typically done from aircraft or satellites.  Remote sensors collect data by detecting the energy that is reflected from Earth.  These remote sensors can be either passive or active.  Passive sensors respond to external stimuli.  They record radiation that is reflected from Earth’s surface, usually from the sun.  Because of this, passive sensors can only be used to collect data during daylight hours.
In contrast, active sensors use internal stimuli to collect data about Earth.  For example, a laser-beam remote sensing system projects a laser onto the surface of Earth and measures the time that it takes for the laser to reflect back to its sensor.

The Global Positioning System (GPS) is a satellite-based navigation system made up of a network of 24 satellites placed into orbit by the US Department of Defense.  GPS was originally intended for military applications, but in the 1980s, the government made the system available for civilian use.  GPS works in any weather conditions, anywhere in the world, 24 hours a day.
This GPS consists of three segments: the space segment, the control segment, and the user segment.  The US Air Force develops, maintains, and operates the space and control segments.

The space segment consists of a nominal constellation of 24 operating satellites that transmit one-way signals that give the current GPS satellite position and time.

The control segment consists of worldwide monitor and control stations that maintain the satellites in their proper orbits through occasional command maneuvers, and adjust the satellite clocks.  It tracks the GPS satellites, uploads updated navigational data, and maintains health and status of the satellite constellation.

The user segment consists of the GPS receiver equipment, which receives the signals from the GPS satellites and uses the transmitted information to calculate the user’s three-dimensional position and time.

Geospatial analysis is an approach to applying statistical analysis and other informational techniques to data which has a geographical or geospatial aspect.  Such analysis would typically employ software capable of geospatial representation and processing, and apply analytical methods to terrestrial or geographic datasets, including the use of geographic information systems and geomatics.

Geospatial analysis, using GIS, was developed for problems in the environmental and life sciences, in particular ecology, geology, and epidemiology.  It has extended to almost all industries including defense, intelligence, utilities, natural resources (i.e. oil and gas, forestry etc.), social sciences, medicine, and public safety (i.e. emergency management and criminology).  Spatial statistics typically result primarily from observation rather than experimentation.