Evonik, a leading global specialty chemical company, believes that the NAMUR’s Module Type Package (MTP) standard for describing a process module’s services will be a game changer for the process industry. 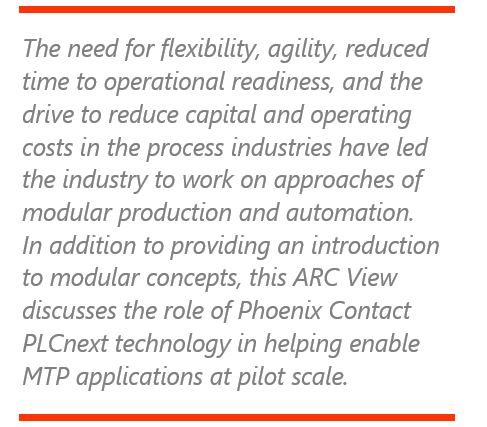 The company decided to invest in the standardization effort as well as in testing and applying MTP to accelerate the standard’s development and maturity.  As discussed in a previous ARC Advisory Group report, ARC recently had the opportunity to see firsthand the use of the NAMUR Module Type Package (MTP) standard for describing process module’s services in several pilot plant installations at Evonik in Marl, Germany.  Evonik demonstrated that the standard is sufficiently advanced to operate pilot plants.  Key takeaways include:

Halving the Time from Product to Operational Readiness

Across the specialty chemicals and life sciences industries, there’s tremendous pressure to reduce the required engineering effort, time-to-operational-readiness, and investment risk.  To address this, in 2009, the 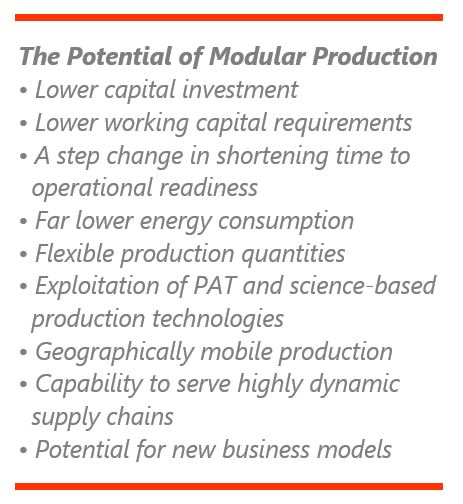 participants of the German Tutzing Symposium defined the principles that could ultimately lead to reducing development, engineering, construction, and commissioning time by 50 percent.  Modular production offers high potential for reducing time to operation and much more.

The traditional approach for scaling up from the pilot plant stage to high-volume chemical production at full industrial scale is to reengineer the plant and build a large plant with a high capacity.  This approach comes with real risk of over-or under-dimensioning and does not provide much product-related flexibility.  An alternate approach would be to build multiple smaller, but standardized and modularized units.  For certain processes and products this modular approach could provide capacity flexibility to help manufacturers adjust to economic cycles and fluctuating market demand for these products.   In a downturn, some modular production lines can be stopped temporarily or relocated to other geographic regions while the other lines continue to produce at optimal, full-capacity conditions.

For short-lived specialty chemicals, a trend is to produce smaller quantities, introducing gradual improvements in product and process and responding flexibly to market and client demands.  With relatively low effort, the modular production lines could be reconfigured or modified to produce different grades, variants, or even entirely different chemicals.  Although process engineering remains necessary, an owner-operator could add, interchange, or modify modules rather than having to pro-cure and construct a new plant.  These changes are reversible too.  This supports product flexibility, especially useful in the operation of pilot plants and market development of new products or variants.

Current applications of modular production are mainly modular pilot plants.  This is because R&D facilities tend to frequently redesign and reuse equipment.  They also provide a relatively safe environment for testing new concepts under realistic conditions and integrating package units in large-scale plants.  But major challenges remain to be resolved before modular plants will replace industrial-scale plants.  ARC had the privilege of visiting the Evonik pilot plant in Marl, Germany, where the company develops products and processes and has been conducting modular production trials.

Production modules should function in a simple, “plug-and-produce” fashion.  Standards for interacting with the self-contained modules are made at the functional services level (stirring, reacting, heating, etc.).  This requires a level of abstraction between the embedded process automation and the process orchestration layer (POL).  NAMUR adopted the original proposal for  this standard for “Module Type Package,” or MTP.  This approach is sometimes referred to as “modular automation” [1]. 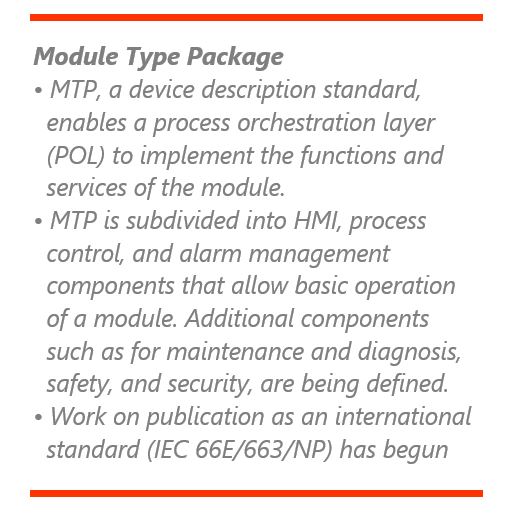 Basic MTP functionality to operate a module is available today and already used by several owner-operators of industrial-scale and pilot plants.  This enables these early adoptions to benefit from today’s partial functionality, learn from the application of the standard in its current version, and improve and complete the standard incrementally. Because of the abstraction between the embedded automation and orchestration layer, the standard allows users to mix modules with automation products from multiple vendors in a single plant. 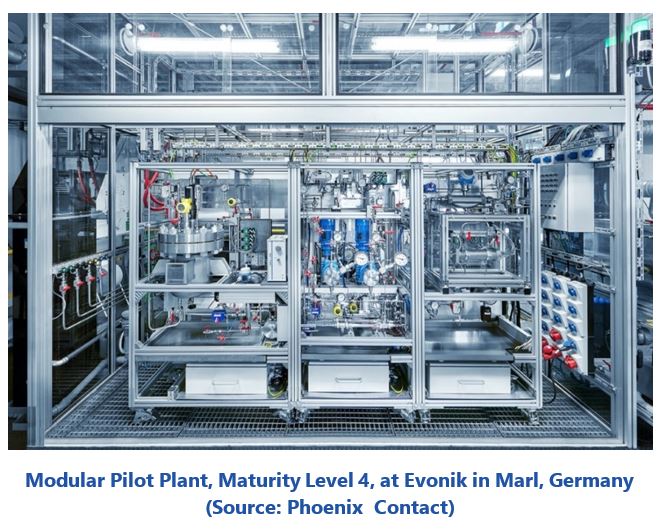 Evonik employed the MTP standard successfully to import the human-machine interfaces (HMI) using an app that PTC developed for its ThingWorx Industrial IoT platform. This used a pilot version of an HMI component library.  Kepware’s collection of protocols provides real-time connectivity between the module’s automation and ThingWorx apps.  These apps read real-time module data and display them on the HMI.  The modules can be monitored and operated separately, but communication across modules is not yet possible.  Through this proof-of-concept implementation, the platform has demonstrated the  potential to fulfill the role of the POL and coordinate operations in a modular plant.  Evonik’s users found the platform to be easy to learn and use and, once PTC developed the app, it enabled quick configuration without coding.

The standard ThingWorx Asset Advisor app is used to model the structure of the components of the modules and store their properties.  Role-specific apps are available to access ERP data; historical process data in the form of dashboards; and engineering data, such as P&IDs.  As a next step, Evonik is looking into additional apps for the ThingWorx platform for orchestration of the modular processes. 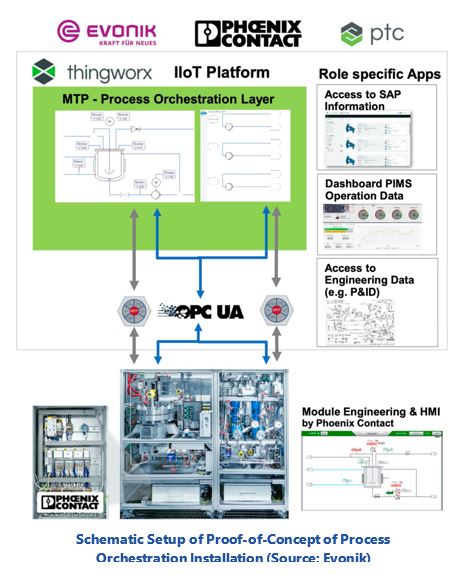 The Strategic Importance of Using an IoT Platform

According to Evonik, it is strategically important to use an IoT platform for modular production applications since this transforms thinking from that of a  top-down execution using the automation pyramid, to one of collaboration in a network.  By connecting to a common IoT platform, different apps from different providers can collaborate to perform their tasks.  This approach enables users to select the components that best fit their needs and assemble them using a low-code, plug-and-play approach. The platform brings new types of solutions and creates new possibilities.

As ARC learned, the MTP standard and MTP-compatible products can be used to integrate modules efficiently to help reduce engineering effort and time to market.

While current applications are in pilot plants, once companies become more familiar with MTP-operated plants, it is likely that  modular production at industrial scale will gain traction, particularly to produce products with short life cycles, where there is enormous potential to increase flexibility and agility and reduce capital and operating costs.

Based on ARC research and analysis, we recommend the following actions for owner-operators and other technology users:

[1] See for example:  Status report “Process INDUSTRIE 4.0: The Age of Modular Production, On the doorstep to market launch”, by NAMUR, PROCESSNET VDMA and ZVEI, March 2019, available at https://bit.ly/34JVywg