Three events during the past month demonstrate (to me) that significant progress is being made on the road toward open process automation systems.  These events are:

That is a lot of activity in a single month!  Let me give a bit more detail on each one.

The interop event was a member-only event for members of the Open Process Automation Forum or OPAF.  Planning for this event began in early 2019.  Members who desired to participate were required to bring some form of prototype, or proof-of-concept, which they described in a written application for the event.  Participants came from 15 OPAF member companies, who brought a total 25 prototypes that were exercised during the event.  Findings and feedback from the event will be shared among the members of the OPAF.  As development of these products continues, more interop events will be scheduled, with the next likely to take place in early 2020.

Bradley Houk of Exxon Mobil Research and Engineering gave the keynote at the ARC Industry Forum in Bangalore India on July 4th.  Besides providing the background and history of ExxonMobil's involvement with open process automation, Brad outlined ExxonMobil's plans to bring open process automation capabilities beyond proof of concept to eventual commercial deployment.

The ExxonMobil test bed program follows the recent completion of their proof of concept and prototype programs, which they described in February at the ARC Orlando Forum.  The next step in ExxonMobil's journey is development of a more rigorous test bed, which will take place during the next 18 months.

The objectives of the test bed are to support continued testing of components and standards and to reduce risks associated with integration, interoperability, and scalability.  ExxonMobil also wants the test bed to generate experimental data that will measure the readiness and completeness of selected components and standards for field trials at ExxonMobil.  They also want to demonstrate supplier capabilities to produce components and products aligned with the O-PAS standard, which was first published last year and is being updated now.

Finally, ExxonMobil wants to move this technology forward in terms of their own evaluation of its technology readiness levels. Like many large process owner-operators, ExxonMobil manages the introduction of new technology into its manufacturing operations through a tightly controlled and gated qualification and readiness evaluation process.  Successful completion of the test bed phase will be followed by field trials at ExxonMobil as well as at other major process industry end users who are collaborating through The Open Group in developing this technology.  The field trials are expected to begin in 2021. 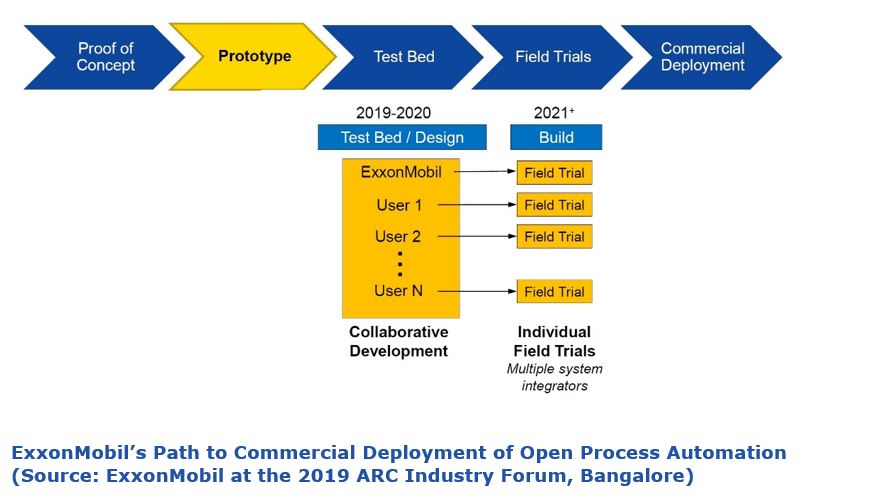 The Yokogawa announcement, made on July 9, was that it had been selected by ExxonMobil to serve as the system integrator responsible for establishing this OPA test bed.  Yokogawa has agreed to create a development office near ExxonMobil's massive campus in Spring, Texas and plans to have this office operational later this year.  Yokogawa will serve as the system integrator during the test bed stage of development.  It might seem paradoxical have a major DCS supplier serving in the system integrator role, but those familiar with ExxonMobil's objectives for open process automation can be certain that the test bed work will involve many suppliers, not just Yokogawa.