Siemens VersiCharge, an electric vehicle charger that is compliant with TR25:2016 standard, has obtained the Letter of No Objection (LNO) from the Energy Market Authority-Land Transport Authority Interim Joint 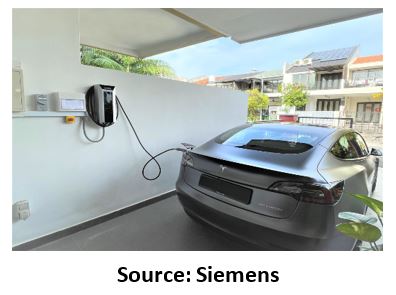 Panel (EMA-LTA IJP), pathing the way for it to be sold and installed in Singapore.

VersiCharge is a sleek and compact electric vehicle alternating current (AC) smart charger capable of delivering up to 22kW of power through a Type 2 plug or socket. It allows EVs to be charged quickly, safely and cost-effectively, and can be installed in any parking lot in public housing, private homes, commercial and industrial locations.

It is compliant with IEC and UL standards and meets a protect class of IP56 and IK10, making it weatherproof for outdoor use and able to last for a long time.

Singapore is a key market in Siemens’ eMobility strategy. With the government's Singapore Green Plan 2030, the EV market is expected to grow exponentially in the coming years. Siemens is poised to partner with Singapore in its plan to deploy 60,000 EV charging points across the island by 2030, by providing quality charging infrastructure, solutions and technology.

The VersiCharge seamlessly ties into many network topologies, comes equipped with GSM/4G/LTE, Wifi, Ethernet and Modbus, and is compatible with OCPP 1.6 backend protocol. With simple touch buttons and LED indicators for key functions, the unit is intuitive and simple to operate.

The Siemens VersiCharge Mobile App (available on Google Play Store and Apple iTunes) further increases the usability and configurability of the charger when connected. It allows users to schedule charging time, view energy consumption, check charge status and more. The ability to pre-set the start time of the charging process, in two-hour intervals, between two to eight hours, enables users to take advantage of economical electricity rates outside of peak periods and to significantly lower electricity costs. In addition, Siemens provides cloud-based remote diagnostics and over-the-air updates to future-proof the smart charger.

The VersiCharge is available in both single-phase (7.4kW) and three-phase(22kW) versions for rated current up to 32 amps. For an average passenger car, the charging time for a power of 22 kW is between 2.5 to 4 hours.