Artificial intelligence (AI) applications are ubiquitous across industries. There’s a lot of hype surrounding AI and the definitions vary depending on the context and usage. In a recent ARC Smart Cities podcast the theme was “AI for good.” Conversations about AI as a technology enabler on the digital transformation journey are common; but when the 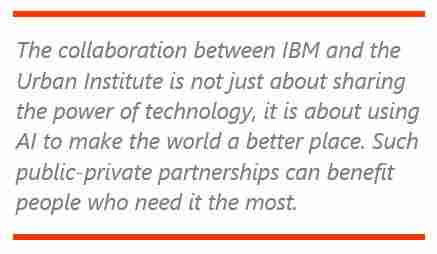 conversation shifts to using AI to make the world a better place, it sparks interest.

ARC’s Larry O’Brien asked Seth Dobrin, Global Chief AI officer for IBM, and Graham MacDonald, CIO and VP of Technology and Data Science at the Urban Institute about their collaborative AI-based approach to mitigate the adverse effects of gentrification in American cities and communities. Mr. Dobrin said that this project was not just about sharing the power of IBM technology, but helping NGOs implement AI to improve their operations. The Urban Institute is a non-profit, nonpartisan, research organization, and its goal is to help people make better decisions and improve the outcomes for communities, government, and “change makers” who could be from the corporate sector, government sector, individual citizens, or advocates trying to bring about change. The Urban Institute relies on the cutting-edge technologies that IBM brings to the table to drive those changes. Such public-private partnerships can benefit people who need it the most.

Speaking about how IBM approaches the technology aspect, Mr. Dobrin said that most nonprofit organizations don't have access to the same resources and people that for-profit companies often do, so it's harder for them to attract and retain talent. Companies must engage with NGOs to fill this gap and execute projects for the overall benefit of society. Next, companies must provide access to the tools and technologies that are required to not only build AI but operationalize and productionize AI models. Plus, IBM should figure out how to help the Urban Institute better manage the gentrification of their communities in a trustworthy manner.

The Urban Institute does research on every place (rural and urban) in the US but has a special focus on the gentrification of cities. The upward pressure on rents and folks who have more resources in neighborhoods is often what is referred to as gentrification. The effects of gentrification that need to be mitigated are people/retirees who have lived in the area for a long time but can no longer afford the rents/property taxes. Many of these people cannot leave the city due to jobs that are nearby, strong family network, and childcare facilities. Their interests must be considered and protected.

On the other side of the coin is a little bit of anti-gentrification. The Urban Institute, the Department of Housing and Urban Development, and state/local governments, want to prevent the decline in rust belt cities where neighborhoods have less opportunities and intervention is required. So, the data enables understanding and intervention for equitable growth. It’s all about giving people access to resources so they can stay where they are and be successful in their communities.

The Department of Housing and Urban Development originally approached the Urban Institute to help them on their AI journey with the available data on neighborhoods. This data is 2-7 years old, and the pandemic has drastically upended housing markets, made the data less informative, and changed the game. For these reasons, Urban Institute initially worked with the Department of Housing and Urban Development to define neighborhoods that were gentrifying, declining, inclusively growing, or stagnating. Machine learning was then used, taking the old data to project or predict the current situation in real time – and that’s where the AI came in.