The global culture and economy abound in pressures to address climate change and the cliché, “necessity is the mother of invention” proves itself true again. As consumers, investors, and politicians clamor for change, capturing carbon from emissions or reclaiming it from the atmosphere has emerged as one of several climate change initiatives. Industry is responding.

What may surprise many is the diversity of methodologies and the maturity of many of them. The diversity of solutions available knows few bounds, though they can be described as fitting into one of three classes: natural, established, and emerging. Some solutions are millennia old, while others are barely more than experiments. Regardless, manufacturers actively seek ways to improve their  environmental, social, and governance (ESG) scores by reducing their holistic carbon footprint to attract/retain investors, customers, and employees.

After decades of controversy concerning the realities of climate change and its causes, the fossil fuel industry is now shifting to a strategy of presenting itself as the source of solutions. This repositioning includes rebranding itself as a “carbon management industry.”

This strategic pivot was on display at the Glasgow Climate Summit and at a Congressional hearing in October 2021, where CEOs of four major oil companies talked about a “lower-carbon future.” That future, in their view, would be powered by the fuels they supply and technologies they could deploy to remove the planet-warming carbon dioxide their products emit with government support.

The US Department of Energy recently added “carbon management” to the name of its Office of Fossil Energy and Carbon Management and is expanding its funding for carbon capture and storage. More globally, the Paris Agreement’s goal is to keep the increase in global average temperature to well below 2°C above pre-industrial levels and, in doing so, to pursue efforts to limit the increase to 1.5°C. This goal has been incorporated into the critical energy-related UN Sustainable Development Goals, which seek to widen access to clean, affordable energy.

Despite the rapid expansion of renewable energy generation, the sheer scale of current energy sector emissions and the vital role of electrification mean that countries must urgently tackle their emissions from energy to meet these global climate goals. In effect, government/customers/investors are calling the energy sector to dramatically reduce its carbon intensity.

Meeting long-term climate goals without applying carbon capture, utilization, and storage (CCUS) technologies at scale in the energy sector requires the virtual elimination of coal-fired power generation and, eventually, that of gas-fired generation as well, with significant early retirements and potential for stranded assets. It will also require the virtual elimination of fossil fuels as an energy source across the board. This isn’t likely to happen, given the ubiquity of the fuels and their byproducts in almost every aspect of the global economy.

An emphasis on supporting system flexibility could see some CCUS-equipped coal and gas plants operating at relatively low load factors. However, the unique ability to achieve negative emissions through bioenergy with carbon capture and storage may mean that these plants run at high-capacity factors, even in a power system with high renewable shares. This could come at the expense of a reduced contribution to system flexibility but would support economies of scale in CO2 transport and storage infrastructure and maximize climate benefits.

Including carbon capture, utilization, and storage in the portfolio of technology options can reduce the total cost of energy transformation. However, maximizing the value of CCUS in the overall energy equation requires calculation and planning. Carbon capture technologies become most competitive in the energy ecosystem when their flexibility, reliability, and carbon intensity are fully valued.

Carbon capture and storage (CCS) or carbon capture and sequestration describe the process of capturing carbon dioxide (CO2) before it enters the atmosphere, transporting it, and storing it (sequestration) for centuries or millennia. Usually, the process captures CO2 from large point sources, such as coal-fired power plant, a chemical plant or biomass power plant, and then stores it in an underground geological formation. This would prevent the release of CO2 from heavy industries with the goal of mitigating the CO2 effects of climate change. CO2 has been injected into geological formations for several decades for various purposes, including enhanced oil recovery, however the long-term storage of CO2 is a relatively recent idea. Carbon capture and utilization (CCU) and CCS are sometimes discussed collectively as 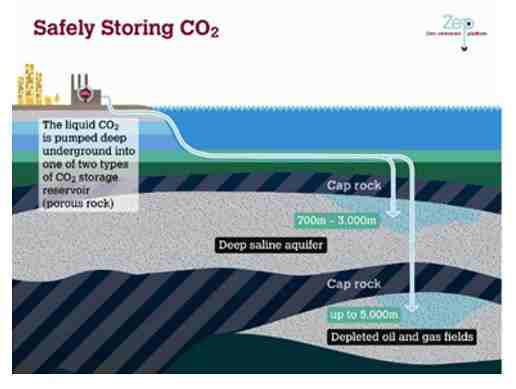 carbon capture, utilization, and sequestration (CCUS), due to the expensive processes of producing a product with an intrinsic low value (i.e., CO2). Carbon capture makes more economic sense when being combined with a utilization process where the cheap CO2 can create high-value chemicals to offset the high costs of capture operations.

A variety of technologies can capture CO2 directly from an industrial source, such as a cement kiln. These technologies include absorption, adsorption, chemical looping, membrane gas separation or gas hydration. As of 2020, about one thousandth of global CO2 emissions were captured by CCS. Most projects are industrial, per the UK’s Department for Business, Energy, and Industrial Strategy.

Currently, entities envision CO2 stored in deep geological formations or mineral carbonates. Pyrogenic carbon capture and storage (PyCCS) is also being researched. Consensus leans heavily toward geological formations as the most promising sequestration sites. The US National Energy Technology Laboratory (NETL) reported that North America has enough storage capacity for more than 900 years’ worth of CO2 at current production rates. A general problem is that long-term predictions about submarine or underground storage security are very difficult and uncertain, and there is still the risk that some CO2 might leak into the atmosphere.