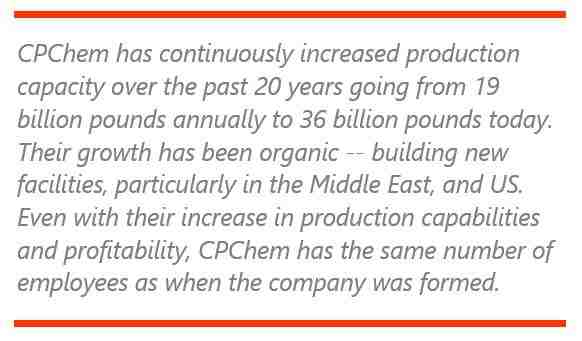 enabling a data-driven culture. At the Seeq Conneqt conference, Brent Railey, Manager of Data Science at CPChem, described how Seeq enabled a cultural shift at the company. CPChem was able to use Seeq to digitally transform the organization by improving collaboration and problem-solving to make faster data-based decisions. CPChem’s digital foundation team used the Seeq platform to help them view and understand the value of data and to enable their digital transformation, setting a foundation for CPChem’s digital transformation team.

The software helped create a common framework for interacting with data across CPChem’s sites, and enabled collaboration across the organization. Seeq’s intuitive user design helped make adoption quick and time to insights faster. CPChem was able to solve problems that they could not solve before using Seeq.

The Influence of Culture

Chevron Phillips Chemical was established in 2000, as a joint venture between Chevron and Phillips 66. In 2000, when Chevron and Phillips combined their chemical business, the management style for each company was quite different. “Cultural differences exist in every organization, and culture is the invisible influence that drives behavior,” Mr. Railey told the audience. Incentives and worker rewards have a strong influence on culture and organizational behavior. The

location where technologies are rolled out in different global areas and cultures impacts the effectiveness of the technology and organization.

Because culture is multifaceted and means different things to different people, and includes shared beliefs, assumptions, values and more, the result is that culture can govern the way an organization operates. It is important to understand the culture and to recognize how people interact and collaborate with each other. To understand culture, initiative owners must recognize the company’s values, priorities, communication modes, management styles, trust levels, risk tolerance, incentives, and disincentives. Trust levels are extremely important. “Low trust environments can lead to under-performing environments because people spend too much time protecting themselves,” Mr. Railey cautioned. “Risk tolerance affects how people act. How people are penalized if they fail, along with their incentives, and this drives behavior.”

IT and Microsoft Excel

By understanding each organization’s agenda while implementing new technologies that impact the culture, it is possible to negotiate and modify the plan so it works best for each organization. For example, the battle between IT and Excel usage. Engineers, business analysts, procurement analysts, finance analysts, and other workers typically love Excel. These workers know where to get the data and whether the data was in the business system or in the historian, for example, and they can use Excel to assemble the information they need.

However, this leads to the proliferation of spreadsheets, isolation of data, and operating the business on Excel. “We had spreadsheets for everything,” commented Mr. Railey. “We were justifying multi-billion-dollar projects with economic models that were built in Excel. We managed sales and operations planning using SAP APO in conjunction with Excel. We used Excel as a feedstock balancing tool for ethane crackers.” Some workers look at hundreds of Excel spreadsheets a day that are so large that it is nearly impossible to trace and understand all the formulas. Excel would sometimes crash because of the enormous amount of data that they were trying to process, and IT would be required to fix the spreadsheet.

In the past the workers were not incentivized to take risks, so the safest route for CPChem workers was to stick to what they had been doing for many years. Many decisions were not data-driven. At the time, when executives made top-down decisions they made risk averse, familiar decisions rather than data-driven decisions. Workers were rewarded for compliance and penalized when they took risks and failed.

The time to justify new projects could be as high as 10 percent of the cost of the project when using Excel. Additionally, because their datasets were getting larger and more complex, and more difficult to perform using Excel, CPChem realized that self-service advanced analytics would help empower the workforce. Rather than use spreadsheets which were creating data and business silos, CPChem realized they could solve existing, and new, challenges with a more modern toolset. The company needed to articulate the value of analytics and connect operations and business data to solve their problems.

CPChem had to update their business intelligence systems to deliver the data needed and change from being a report delivering organization to a data servicing organization. Because CPChem operated lean, the analytics had to be put in the hands of the workers who best understand the data to extract the value out of its data. IT organizations don’t have the ability to interpret operations data correctly because they usually do not have the same education and experience as technical operations workers.

"Self-service analytics was already happening, but in an uncontrolled, untraceable way. In other words, they’re already doing it,” Mr. Railey noted. “We had to frame the message to appeal to concerns about compliance, along with expressing the potential value self-service analytics could bring.”

“We realized that some technologies could help enable cultural change,” stated Mr. Railey. “We needed software that would put the data and visibility in context, which was easy to implement, understand, and use, into the hands of the users.” They needed a platform that would enhance their ability to do self-service analytics and provide visibility into what they were doing. The software needed to help them identify who was collaborating on the analysis, what data sources they were accessing, and who was able to view the results.

The Impact: Becoming a Data-Driven Culture

CPChem selected Seeq because they needed a technology that provided an intuitive user interface, facilitated fast solutions to pressing problems, and enabled collaboration. The technology needed easy workflows to operationalize results and perform machine learning. Seeq was able to drive cultural change in the organization with its ability to support workers with data-driven decisions. Seeq’s user interface was designed to be intuitive to use, which facilitated easy adoption. Seeq helped create a common framework in which the sites interacted with their data for collaboration and better site-to-site decisions. The software is designed with operations and engineering workers in mind, which empowers frontline workers with fast time to insights.

The initial challenge was to articulate the value of Seeq so that CPChem management would understand why these modern self-service advanced analytics would be more effective than Excel or Power BI, which it was currently using. Sometimes IT and Operations do not see eye to eye. The workers did not have experience with Seeq and did not understand why they needed another technology to do their work.

When rolling out Seeq, the company had another initiative to obtain ideas from frontline workers so that engineers or other process SMEs could submit ideas for problems that had been plaguing them for a long time. This bottoms up approach helped them identify, prioritize, and solve problems for their “Performance by Design” projects, which allowed them to try new processes and technologies. The process SMEs used Seeq during a Proof of Concept (POC) to justify multiple projects that fell under CPChem’s Performance by Design initiatives.

The software allowed the organization to easily identify where the bottlenecks were, how long they operated at those bottlenecks, and establish baselines and measure the value of changes before and after the implementation of the project. These insights uncovered during the POC period were especially important in helping the organization understand the value of the technology. 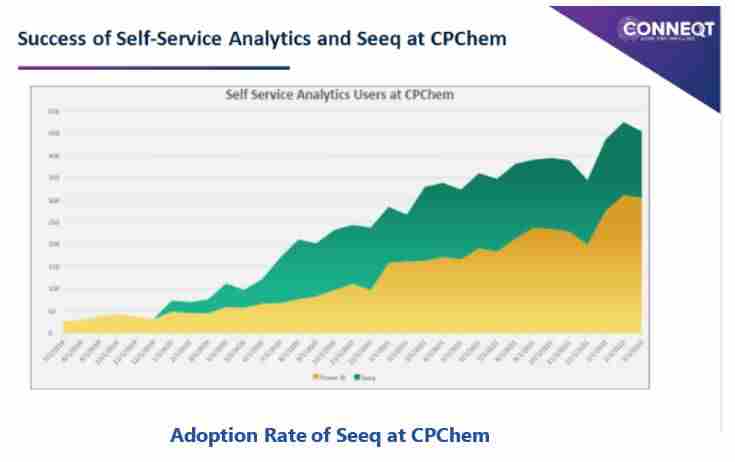 Upon completion of the POC, users were able to learn the scale of the potential value of using Seeq from trusted colleagues. Seeq was easy to adopt and use and solved a massive number of problems quickly. The time to ROI was weeks rather than months or longer. The problems that they were able to solve using the technology’s visibility were problems that the workers did not know how to solve previously. Because of their successes, the team was able to articulate the value of Seeq to management and other workers, which facilitated a successful enterprise roll out of the software across the organization.

CPChem’s enterprise license allowed workers the ability to try the software in different locations. As the users started to adopt the technology, its usage increased exponentially. Because of the positive impact, Seeq enabled cultural changes. The use of Seeq encouraged collaboration among users and helped them solve problems and increased productivity.

Prior to using Seeq, the organization understood that there was a lot of value locked up in their data, but they could not 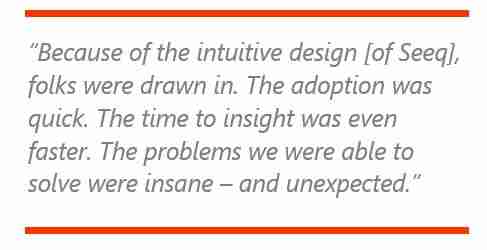 use the data easily. “Implementation did not take long, and the intuitive user design helped draw the workers in. Adoption was quick, the time to insights was faster and the problems we were able to solve were insane. The problems solved ranged from optimization of catalysts in our reactors to ad hoc incident investigations and finding root causes in hours for problems that would have taken a week or longer to figure out previously.”

Mr. Railey told the audience, “By working with Seeq, the users have come to appreciate the technology. Even though there was still some resistance to using the new technology at one plant in a geographically and commercially isolated area, the barrier was reduced substantially after the workers heard from other trusted workers about the results from other plants. This resulted in an internal pull to bring Seeq into their location even though they were not quite sure what they would do with the technology or how it would help them.”

Understanding the Value of Seeq

Mr. Railey cautioned that it is important that organizations understand opportunity costs. He said a lot of organizations do not invest in technology because they only see the risk and failures. They do not consider the losses if they do not implement a technology or project. “If we don’t implement, what are we losing without the software?” Mr. Railey asked. “The integration of Seeq to our data was smooth because you did not have to install additional proprietary software. The software platform allowed us to directly connect to the data for the purpose of presenting to management using Power BI. We could not do this previously. And we were able to clean the data and perform the calculations we needed.”

multiple sites. Because it was a joint venture between two companies, CPChem inherited multiple historians from multiple suppliers. According to Mr. Railey, “Seeq helped create a common framework in which the workers could interact with their data and increased site-to-site collaboration because of the cross sharing of data, which enabled a major cultural shift in the company.”  Because of Seeq’s capabilities, CPChem started using the self-service initiatives in other organizations within the company like finance and supply chain in addition to manufacturing.

It is important to realize how culture can drive behavior. Leadership styles and incentives can be a major driver of certain behaviors; however, technology can help enable cultural shifts. When initiatives fail, it is usually due to a lack of adoption. It is important to figure out what you need to do to educate, align the technology to the culture, and plan for cultural impacts. Incentives must be kept in mind when you are rolling out a new technology or project. Impact on the user and organization is also key to analyze and anticipate, and preparation for the change should be planned.

It is important to include workers in the process to initiate a cultural shift. CPChem adopted Seeq by allowing workers to see the value. Seeq’s intuitive user interface enabled CPChem to obtain continuous real-time insights and constant feedback, enabling a culture shift. The software helped them solve problems that they were unable to solve previously. Users were able to see the value and CPChem saw adoption increase exponentially after it was rolled out.