Davey Textiles Shows Digital Transformation Can Be Affordable and Effective

If you thought industrial digital transformation is mostly an exercise in buying a technology, just talk to Dan King, Vice President, Production, Research & Development at Davey Textile Solutions. He’ll set you straight. Faced with an increasingly competitive market, he proved that problem solving via digital transformation is about human-driven innovation. He also demonstrated that it can be done very affordably. In fact, Davey Textiles showed that the

company could leverage digital transformation to use as a competitive advantage.

Davey Textile Solutions Inc, formerly Davey Fabrics Inc., has been in the textile industry in Canada since 1986, beginning as a fabric wholesaler. In 2001, the business focus shifted towards the distribution and conversion of 3M™ Scotchlite™ Reflective Materials. The company’s production operations reside within a 25,000 square foot manufacturing facility and warehouse located in Edmonton, Alberta, Canada. Additionally, the company has a distribution warehouse in Houston, Texas, USA. The company serves a global customer base.

In 2010, the company realized the fabric distribution business wasn’t sustainable in its current form. Too much offshore competition, particularly from Asia sources, was creating instability in core revenue—safety materials. From a wholesale fabric distribution perspective, that vertical began to shrink due to market consolidation.

Heading abroad, the team learned as much as it could about the end-to-end process of manufacturing safety materials, from narrow-width weaving to thermoplastics. That same year, they purchased their first two looms and a laminator. They are now up to 25 looms and five laminators. What is key is that some of those are high-end looms, which are more costly to purchase but also capable of a manufacturing quality level that their offshore competition can’t match. 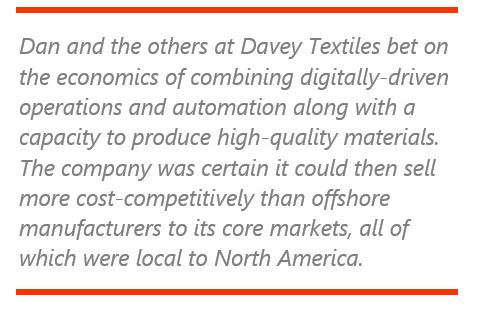 The strategy was built around what they saw as a weakness in the offshore model, an overreliance on low-cost human labor combined with lower-cost (and quality) looms as the main competitive differentiator. Dan and the others at Davey Textiles bet on the economics of combining digitally-driven operations and automation along with a capacity to produce high-quality materials. The company was certain it could then sell more cost-competitively than offshore manufacturers to its core markets, all of which were local to North America.

The strategy paid off. What they discovered was that their commitment to unique and high-quality manufacturing, all done locally, did in fact, give them a differentiated market position. Their offshore competition is unable to replicate the quality level of the Davey Textiles products. So, Davey Textiles naturally stepped in to fill the market void by expanding its customer base to include that offshore competition. The same competitors that formerly compromised Davey Textiles’ revenue are now contributing to the company’s profits.

Looking back, the Davey Textiles team had the right strategy in place, but it wasn’t a straight line to success. After they came up with their plan, they still had to execute. Because the looms were central to their competitive advantage, the company had to maximize production capacity, clear any associated process bottlenecks, and, most importantly, minimize downtime. Manual, reactive and gut-feel decision making simply wouldn’t work. Data would be key.

Access to Loom Data Is Key for Davey’s Digital Transformation

Dan has a diverse background, including education and training in computer science. He joined the company in 1992 to run their IT network, but he eventually ran many of the operations in the business and is now one of the company’s key executives. He is a data-driven guy.

When Dan was abroad learning about manufacturing processes, he kept seeing opportunity through the lens of his IT background. In looking at the looms in the textile manufacturing process, he was naturally curious as to how he could pull data from them, push it into network systems, and then use it to drive the business strategy.

He knew he would need to analyze loom data and combine it with other data streams to optimize his operations and the uptime of these critical assets. He also needed to do it in near real-time. If he couldn’t do that, the 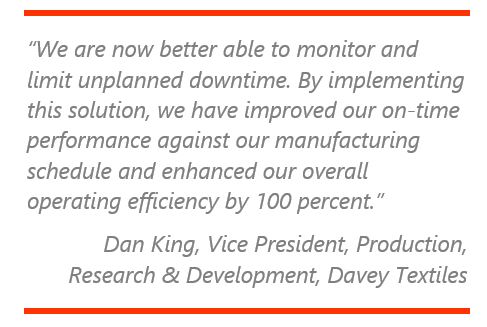 business strategy they were relying on wouldn’t work.

He was told it wasn’t possible to extract data from the looms for broader use. Since looms are expensive and can last decades, trying to find and acquire a new set of smart looms wasn’t financially possible or pragmatic.

One thing he did know was that the Davey looms were digital, even though they couldn’t connect to external systems. Faced with that situation, he knew he could solve the problem, he just needed the right tool.

Dan looked across the globe for help with the problem but found all the proffered solutions to be insufficient, cost prohibitive, or often both. Much like the business strategy to produce locally, he found the solution in his own backyard. In Edmonton, he came across Shook IoT, now a part of Uptake, the Chicago-based industrial AI company.

One of the key market issues Uptake targets is Industrial IoT cost and ease of data access. Their solution, Uptake Fusion, is designed to work within existing technology architectures, so as to reduce cost, and can bypass access issues presented by proprietary equipment and systems. 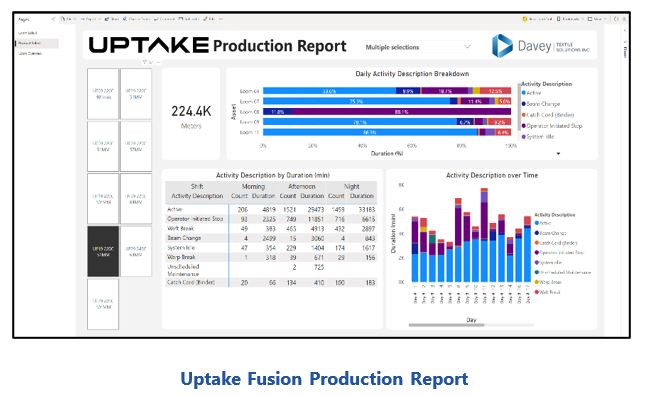 Working with Dan, the Uptake project team was able to establish a connectivity platform for the loom data using Uptake Fusion. It began by adding a hardware component to the looms that tied directly into sensor wires. By doing so, Uptake Fusion bypassed any data issues that would have arisen due to having to connect to the proprietary programmable logic controllers (PLCs) from multiple vendors found on the shop floor.

Once data could be shared, it was sent to a local wi-fi access point, into the business network, and up into Microsoft Azure, where it was stored in a cloud-based historian. From there, Uptake Fusion collected and displayed the loom data in minute intervals. The solution also mapped the correct data back to each loom, so it could be examined against operating logic and configuration and validated at the source. 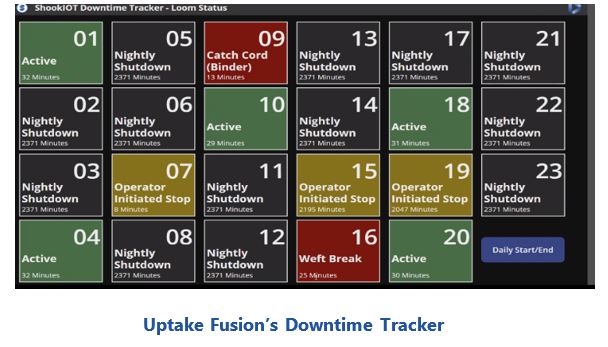 If something interrupted operations, the Uptake Fusion’s Downtime Tracker sent an alert to the operator. Due to the noise levels on the floor, the solution sent the alert via Twitter, ensuring operators could be notified directly through their hearing protection devices.

The company could also now visualize production data to examine trends and anomalies for products, days, shifts, equipment, room locations, and other key variables. They now had new insight into causes of lost production, enabling them to eliminate issues that undermined operational optimization. Uptake Fusion also managed all of this using a single-pane view, minimizing user complexity.

A Little Success Will End Up Taking You a Long Way

Davey Textiles is using Uptake Fusion to maintain market differentiation. The company has a vision for integrating all critical asset information into a more holistic data and analytics strategy. It began with looms but will grow to incorporate finisher range, warper, lamination, inspection, and winding data. The vision in its entirety includes:

Dan began with a specific issue and task in mind. Succeeding in that task opened him up to the power of digital transformation. He and the company are focused on continually improving competitive metrics, and they are now considering a wide-range of supporting technologies to do so, including additional analytics, blockchain, digital inspection, and error-proofing systems.

Davey Textiles Industrial IoT project was critical to the company’s long-term viability. Rather than selecting a technology and looking for problems, Dan applied an outside-in method to focus his thinking. This allowed him to see a clear, singular business challenge that he just needed to learn how to solve. His thought process was threefold:

Davey Textiles and Dan King demonstrated that digital transformation doesn’t have to be costly or complicated. By focusing on critical competitive issues, the answer to the business challenge was right in front of them. Or, in this case, right in Davey Textiles’ backyard.