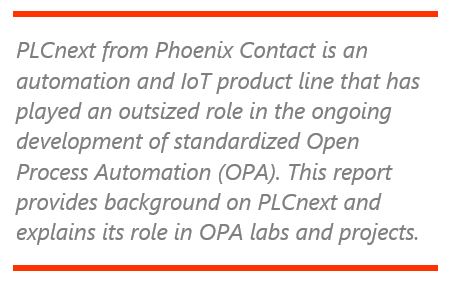 integrators who (as one executive noted) “want to deliver PLC automation, but who also want to deliver some other application, and these other apps may be quite important and differentiating for their offering.”

PLCnext has played an outsized role in the ongoing development of standardized Open Process Automation (OPA).  It has played an important part in several OPA projects and labs to date, and likely will continue to do so.  In this report, we will provide some background on PLCnext, and explain its role in these OPA labs and projects, as well as its own user community.

PLCnext was introduced in Europe in 2017. Its modular hardware consists of a set of ARM-based processor units and a backplane with slots supporting Phoenix Contact’s Axioline-F I/O module family. This is very much like a normal PLC. Software is where PLCnext is different. The software stack consists of: 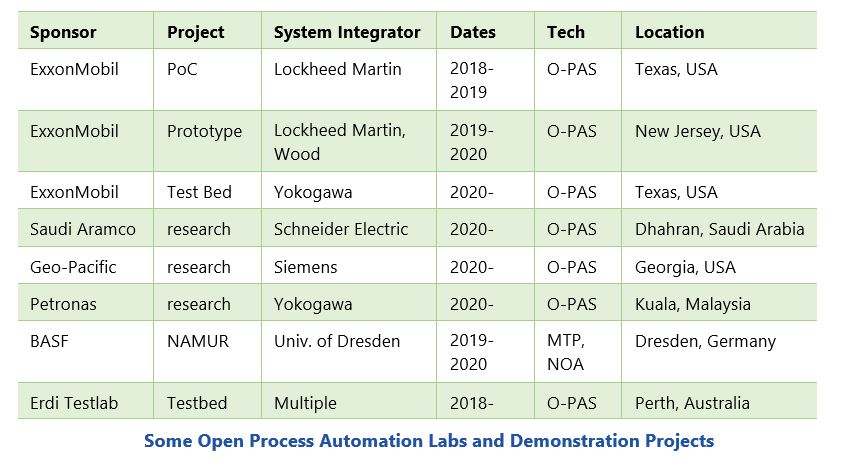 Much of this capability was available from the 2017 launch of the PLCnext, so it attracted attention from ExxonMobil and 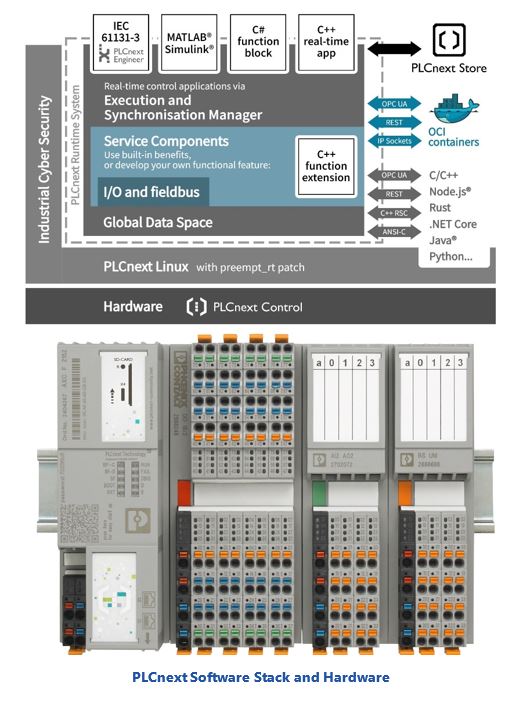 Lockheed Martin who were then choosing partners to develop a proof-of-concept system for ExxonMobil’s Open Process Automation vision (this was before The Open Group began managing the O-PAS standards development).

At that time, support for PLCnext was concentrated in Europe, and given the support-intensive nature of such a project, Phoenix Contact chose not to participate. However, PLCnext has featured prominently in ExxonMobil’s subsequent open automation projects.

Its first use was in the ExxonMobil OPA prototype project. This project developed an open automation system to control a pilot process unit for several months of operation in 2020. It included distributed control nodes (DCNs) supplied by Intel and Phoenix Contact (using PLCnext). Other I/O hardware was supplied by Yokogawa and Moxa. Interfaces were implemented to a process safety system and a gas chromatograph, while an advanced computing platform hosted soft controllers, HMI, data historian, and other applications.

When the prototype project ended, ExxonMobil moved the equipment to its Texas OPA Test Bed project. This project will prepare the OPA technology for field trials at ExxonMobil and will include a large number of control and I/O suppliers operating a simulated distillation unit. Work on this project is ongoing at this time. ExxonMobil has plans to use the higher performance PLCnext processors as this work progresses.

Besides ExxonMobil, PLCnext is being used in OPA lab work by Saudi Aramco and Georgia Pacific and has been used in a demonstration of NAMUR module-type package (MTP) technology led by BASF. In the labs, PLCnext will initially run the IEC 61499 runtime both integrated and in a Docker container.

The MTP project demonstrated the ability of multiple modular unit operations to quickly integrate and have their operations orchestrated from a single point. This demonstration used a batch process and OPC UA for interoperability. The recipe management and orchestration software were developed by a major automation supplier, but all of this software was ported to PLCnext for execution in the demonstration. Again, this portability is evidence of how useful it is to have such a highly standardized software development and runtime environment in an automation product like PLCnext.

Given its use in so many of these demonstration projects where the PLCnext has served in a wide variety of roles, this validates the wisdom of combining a standardized Linux environment with conventional automation capability and tools.

Besides this, one of the more powerful demonstrations of the usefulness of PLCnext is the development of the PLCnext Store and Community. At present, there are 26 software suppliers besides Phoenix Contact who have software available through the PLCnext Store (see table).

In ARC’s view, PLCnext is a pre-standards model of an OPA product. It demonstrates the potential value of a standardized software environment and an ecosystem of software providers. The fact that both Phoenix Contact and Codesys offer their (directly competing) IEC 61131 tools in the PLCnext Store is evidence of the product’s openness. Thus, PLCnext is something of a model that ARC sees other automation system and product suppliers adopting as well. The “consumerization” of industrial automation is beginning.