Overall, revenue of automation suppliers ventured into positive territory during the second quarter of 2017, increasing by 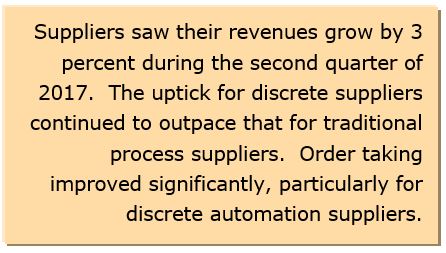 over 3 percent compared to the same quarter the previous year.  Discrete-centric suppliers continued to see strong gains in both revenues and new orders, reflecting growth in the automotive and electronics sectors in many regions around the world.  The oil & gas industry has begun to show signs of life, with targeted capital investments aimed at improving reliability and process efficiency.  This has helped stem the revenue losses of many traditional process suppliers.

Order taking grew at rates not seen since late 2014, marking the second consecutive quarter of growth after two years of declines.  Process suppliers saw gains, but discrete suppliers posted double-digit growth, so we should see strong sales in the quarters to come.

Compared to the second quarter of 2016, the total combined revenues of automation suppliers to both the process and discrete manufacturing industries grew by 3.2 percent (see Figure 2).  Process industry suppliers saw their combined revenues grow by 1.5 percentage points, reflecting the continued slowdown in activity in the oil & gas sector, and many still reported double-digit declines in sales. (Without a recent large acquisition by Thermo Fisher, revenues would have fallen by slightly under 0.5 percent).  Suppliers to the discrete industries saw a 5 percent increase in combined revenues.  While recent acquisitions and divestitures (Parker, GE) had an effect, many suppliers reported strong double-digit organic growth.

In this Insight, ARC Advisory Group includes the most recent quarterly results for major automation suppliers that

publicly report their results.  To convert the revenues of non-US suppliers to US dollars, we average exchange rates for foreign currencies used for the entire second quarter of 2017.  The euro declined by 2.6 percent relative to the dollar from Q2 2016 to Q2 2017, while the yen declined by 2.9 percent over the same period.

ABB Robotics & Motion reported a 3 percent increase in revenues during the second quarter; orders grew by 12 percent compared to Q2 2016. ABB reported strong activity in robotics and light industry, with third-party base orders (less than $15 million) increasing by 10 percent.

ABB Industrial Automation’s revenues dropped by 9 percent from the same period in 2016, while orders increased by 6 percent on increased capital expenditure in the oil & gas and mining sectors.  ABB attributed the revenue slip to its lower order backlog during the quarter.

AspenTech saw stronger growth during the quarter, rising nearly 9 percent to $123.7 million.  Subscription and software revenue was $115.4 million, up from $106.7 million in 2016.  Revenue from services was $8.2 million during the quarter, up from $7 million in Q2 2016.  The quarter saw increased interest and order taking for the company’s asset performance management offerings, as well as the introduction of the latest version of its flagship aspenONE product.

FANUC’s revenues for its Factory Automation and Robot Groups grew by 25 percent versus the same period in 2016.  FANUC’s Factory Automation Group reported a 20 percent increase in revenues as sales to major Asian countries improved, and demand increased in the machine tool industry in China.  The Robot Group saw sales rise by slightly under 30 percent versus the same period in 2016, on much stronger activity in China and Japan.  Order activity for FANUC as a whole increased by 32 percent during the quarter.

Fortive (formerly Danaher) saw revenues increase by about 5 percent during the quarter to $1.63 billion. The Industrial Technologies segment’s revenues grew by 4.7 percent, mostly organic, with acquisitions contributing over 1 percent and currency exchange sapping slightly less than 1 percent. The Professional Instrumentation unit saw revenues grow by 4.8 percent; core growth of 6.6 percent was weighed down by acquisition/divestiture activity and exchange rates.

Honeywell Performance Materials and Technologies reported an 8 percent decrease in revenues to $2.4 billion during the quarter.  Currency translation had a significant effect on revenues. Honeywell reported organic revenue growth of 6 percent for PMT, due to strong sales of advanced materials and the gas processing business in UOP.  Honeywell Process Solutions, folded within PMT, saw a 2 percent decline in reported revenues; organically, revenues declined by only 1 percent. Segment margin expanded 200 basis points to 23.4 percent, reaching $524 million.  During the quarter, Honeywell announced the acquisition of Nextnine, a cybersecurity provider.  According to Honeywell, order activity grew by double digits, adding substantially to order backlogs.

Metso Flow Control saw revenues dip by 9 percent from the same period in 2016, due to lower project orders in previous quarters.  Order activity during the quarter was up by 4 percent due to an increase in demand for pumps, valves, and services.  Orders from the oil & gas sector increased versus Q1 2017.

Mitsubishi Electric’s industrial automation business sales increased by about 16 percent versus the same quarter in 2016.  The factory automation systems business saw an increase in orders and sales compared to the same period the previous year due to CapEx growth in the smartphone and automotive industries in China, along with the organic LED industry in Korea.  The automotive equipment business posted increases in orders and revenues as Japanese car companies increased their sales in China, and the European car market improved. 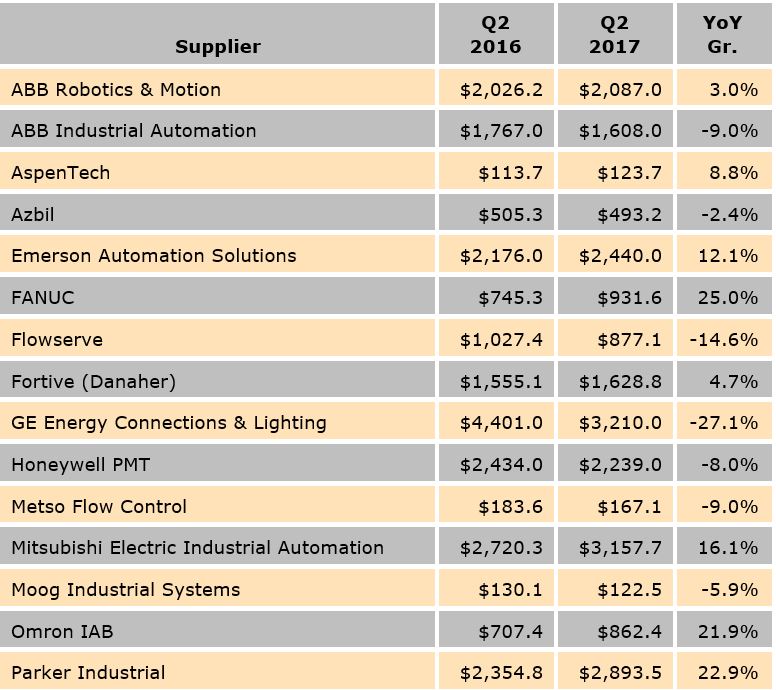 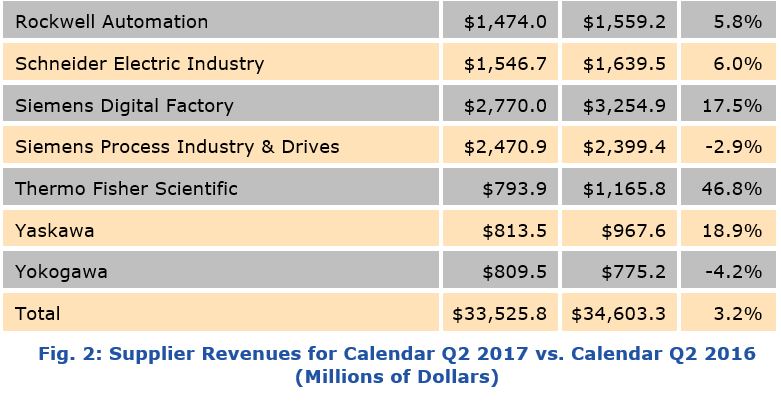 Moog’s industrial sales slipped by 6 percent compared to the same period in 2016.  Roughly a third of the decline was due to unfavorable currency exchange rates, according to Moog.  Revenues for the industrial automation unit fell by 13 percent, while energy revenues dropped 20 percent due to lower wind project activity. Sales in the test and simulation business, in contrast, were strong after a couple of lackluster quarters, rising by nearly 30 percent from Q2 2016.

OMRON’s Industrial Automation business revenue grew by nearly 22 percent compared to the same period in 2016.  Sales in Japan grew by over 17 percent on increased investment in the semiconductor and liquid crystal markets. Overseas sales increased by nearly 25 percent; sales in the Americas were down overall despite stronger activity in the semiconductor sector.  Sales in Europe increased significantly, according to Omron, and also grew strongly in China and Asia, thanks to the company’s efforts to increase its presence in the region.

Parker Industrial’s revenue grew by about 23 percent during the quarter compared to Q1 2016.  Sales in the North America segment grew by 32 percent to $1.7 billion, while international revenues grew by 12 percent to $1.2 billion. Orders increased by 10 percent for both segments.  The significant increase in revenues was largely due to Parker’s acquisition of CLARCOR, a provider of filtration products.  Indeed, Parker’s Motion Control and Flow & Process Control segments both saw revenues rise by about 8 percent, while Filtration posted a whopping 63 percent gain.

Rockwell Automation’s revenue grew by 6 percent during the quarter compared to the same period in 2016.  Sales of control products and solutions increased by 7.4 percent to $867 million.  Architecture and software sales saw growth of about 10 percent to $732 million.  Sales increased in most global regions, led by Asia, which saw a 22 percent increase in revenues during the quarter.  Latin America posted 12 percent in gains, while the US and Canada saw 8 and 4 percent growth, respectively.  Sales in EMEA were flat.  Unlike in past quarters, currency translation had negligible effect on revenue intake.

Schneider Electric’s Industry division reported that revenue grew by 6 percent organically during the quarter.  All regions saw growth, and the company reported strong momentum with its EcoStruxure platform offerings, as well as increased activity in brownfield projects in its Process Automation business. 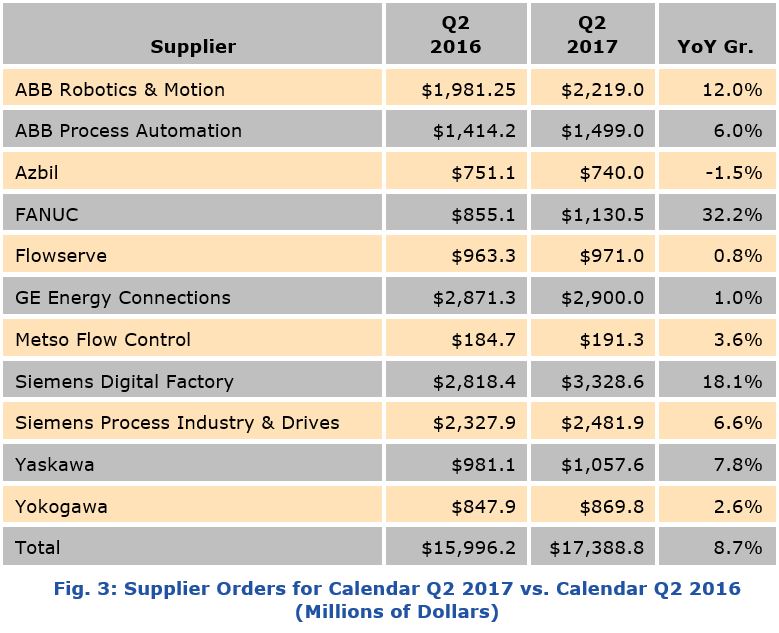 Siemens Digital Factory saw revenues grow by over 17 percent during the quarter compared to the same period last year; order activity increased by 18 percent.  Siemens reported growth in revenues and order activity in all businesses, particularly the PLM business, which saw significant growth due to the recent acquisition of Mentor Graphics.  Process Industry and Drives saw revenues slip by about 3 percent despite slight growth in the process automation business.  Overall order activity was up by nearly 7 percent, driven by large orders in the solutions business in Asia.

Yaskawa’s revenues for the quarter grew by 19 percent versus the previous year.  Yaskawa’s Motion Control business grew by nearly 33 percent year-over-year, due to strong activity in the semiconductor, electronics and, machine tool industries; and a recovery in demand for AC drives due to increased infrastructure investment in China and the US oil & gas sector.  The Robotics business saw revenues rise by 10 percent, largely due to increased demand in the automotive sector in the US, Europe, and China. Yaskawa’s Systems Engineering sales were up by over 10 percent, thanks to increased sales to the steel and wind power sectors.

While two consecutive quarters of growth don’t necessarily indicate a long-term trend, much of the news from Q2 augurs well for the future of the automation market.

While the process sector still suffers from a well-entrenched (but moderating) decline in the upstream oil & gas sector, suppliers are finding ways to mollify the effects on their respective businesses through high-value optimization solutions, reliability-oriented project work, and by developing solutions for reducing the costs and duration of capital projects.

Discrete suppliers, particularly those based in Japan, are seeing outsized growth as the electronics and automotive sectors continue to make big investments in anticipation that the current economic expansion in many regions will continue.