Western sanctions, imposed because of the war on Ukraine, have had a significant impact on automation systems in Russia. Hit hard by the sanctions, large companies, such as Lukoil and Rosneft, are highly dependent on Western 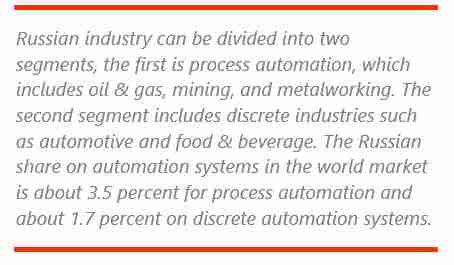 technology, and this has led to a significant drop in their productivity. In addition, due to the Ukraine conflict many Russian companies have lost automation & IT experts, which is impacting the availability of automation solutions for production processes and manufacturing operations.

Since the beginning of the Western sanctions, the Kremlin has kept its cool about the consequences for industry in Russia. At the same time, Russia no longer reports key economic figures.

How are the Western sanctions affecting Russia? If one believes the statements from Moscow, it is a matter of cuts, but they are more damaging to the originators than to the powerful Russian economy. External sources, however, come to a different scenario. They say that the Russian economy is paralyzed at all levels. About 1,000 foreign companies would have left the country, which means the loss of up to five million jobs.

So the perception often conveyed in Western media that Russia is being hit hard but the economy is holding up quite well is wrong? This perception can be justified by the absence of essential Russian economic data. Since the beginning of the invasion, the Kremlin's publications have become increasingly selective. Unfavorable data series are hidden, while only those that shed a more favorable light on the situation are published. In particular, statistics on foreign trade, monthly oil and gas production, and business figures for large companies are withheld.

Perhaps the assumption that monthly revenues from oil and gas exports in billions of dollars were keeping the Russian economy afloat is also a rumor. Russia's energy revenues have actually fallen in the past three months. This is because Russia's new energy partners, such as China and India, have been negotiating hard on prices. For example, import data from China suggest that crude oil is being purchased from Russia at a discount of $30 to the world market price. On the other hand, large volumes of pipeline gas, for example, could not simply be diverted toward Asia.

Massive Shortfall on the Import Side

In fact, it is difficult to predict what is really happening in the Russian economy right now. A collapse of Russia's GDP of 20 percent or more, is unlikely. In the long run, it is vital for the survival of the Russian economy to replace the defaulted imports. The economic forecast for the future depends not only on the progress of the war, but on whether Western countries can sustain their sanctions to restrict much-needed imports.

Economic Impact of the Conflict Between Russia and Ukraine

February 24, 2022, began in Ukraine with wailing sirens and reports of explosions. The news caused horror not only among the Ukrainian population, but also throughout the world. Since then, many companies have been grappling with how to respond to the situation.

The Situation in March 2022

In March 2022, the United States (US) and the European Union (EU) hit Russia with a barrage of sanctions for its war on Ukraine. For the first time, the US government used its technology dominance as a weapon, a punishment that could set back Russia's economy by several decades.

As Russian President Vladimir Putin bombarded Ukraine with missiles, the EU, the US and other countries fired back with sanctions. Several Russian banks were cut off from the Swift international financial system, and Russian aircraft were banned from EU and US airspace.

The Situation in April 2022

By April 2022, western machine building companies had largely stopped doing business in Russia. Due to the sanctions, hardly any machines or spare parts could be delivered to Russia. The truck driving bans in sanctioned EU countries caused bottlenecks in transport logistics. The Russian government threatened market-dominating foreign companies that want to withdraw from Russia with third-party administration of their local subsidiaries.

Claas suspended production of agricultural machinery in the Krasnodar Territory, while pump manufacturer Wilo stopped all deliveries of goods to Russia. Jungheinrich halted deliveries of industrial trucks to Russia a month ago. Warehouse logistics manufacturer Kion Group is considering selling its Russian business.

The Situation in May 2022: The Great Retreat of Companies

As the war escalates and becomes more brutal, an increasing number of companies are taking drastic measures. As a result, more companies are withdrawing completely from Russia. The following is a brief overview by industry.

Opel parent company Stellantis has completely suspended production at its Russian plant. The step was necessary to comply with sanctions and to protect employees. The group had already announced an export ban on vehicles from the plant in Kaluga, south of Moscow, at the beginning of March and significantly curtailed production.

The Volkswagen Group also cut off exports to Russia with immediate effect. Production at the Kaluga and Nizhny Novgorod sites was suspended until further notice. Finished vehicles already in Russia were no longer delivered to dealers there. At VW subsidiaries Porsche and Skoda, production in Russia and vehicle deliveries were also terminated.

The Mercedes-Benz Group discontinued all business activities in Russia. This also affected the truck manufacturer Kamaz, with which Daimler built commercial vehicles. The Stuttgart-based group has also examined how it could divest its shares in Russian truck maker Kamaz.

BMW abandoned exports of cars to Russia and plans to end production at its plants there.

Swedish car manufacturer Volvo Cars, a subsidiary of the Chinese vehicle group Geely, will no longer supply cars to Russia until further notice. US manufacturer General Motors announced an export ban to Russia. Ford Motor informed its joint venture partner Sollers about the suspension of its Russian business.

Until further notice, Japanese world market leader Toyota will close production at its plant in St. Petersburg, where Toyota primarily produces for the Russian market.