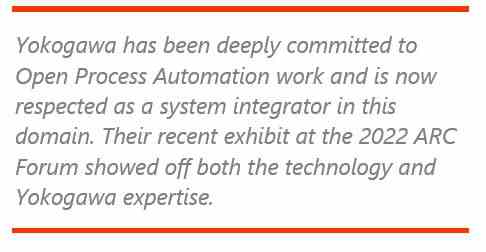 As the Open Process Automation Forum (OPAF) has developed, some existing DCS suppliers have been deeply engaged with the work, while others (while not ignoring it) have stayed on the sidelines. Yokogawa is certainly one of those who are deeply engaged. It has committed its own experts to serve OPAF in both technical and administrative leadership roles. In addition, Yokogawa has undertaken work as system integrator for several corporate OPA Test Beds. These projects are somewhat like joint ventures, in that they require investment by both the end user and the system integrator. The benefit is that both gain deep expertise on the O-PAS and its underlying technologies. Their investment yields tools for standards-based automation systems rather than proprietary DCSs. In Yokogawa’s view, future OPA automation projects will require new software tooling and new project implementation processes, while the requirements for automation-oriented core functionality and process expertise will remain.

At the June 2022 ARC Industry Forum, Yokogawa demonstrated an OPA system that was in effect a miniature version of what they had integrated for ExxonMobil’s Test Bed. It included control and I/O equipment from three different suppliers, a non-Yokogawa compute platform and operator HMI. The OPA system integrated (via a software gateway) with its conventional Yokogawa CENTUM DCS. This demonstrated the ability to add O-PAS based systems to an existing CENTUM installation. CENTUM and Yokogawa have maintained a tradition of progressive (upward) compatibility for decades, and Yokogawa was keen to demonstrate to its existing customers that its work to develop O-PAS based systems would continue this policy and not leave them at a dead end.

Gaining Credibility in a New Role

Yokogawa has been gaining credibility as a vendor-agnostic system integrator for Open Process Automation projects. In mid-2019 ExxonMobil selected Yokogawa to serve as the system integrator responsible for establishing their OPA Test Bed. At the time, the selection of a major DCS supplier to serve as an OPA system integrator raised some eyebrows within the automation industry. How would a DCS supplier really work objectively with hardware and software from multiple suppliers, or would they inevitably favor their own products to some degree that perhaps compromises the openness of the overall project? At the time both ExxonMobil and 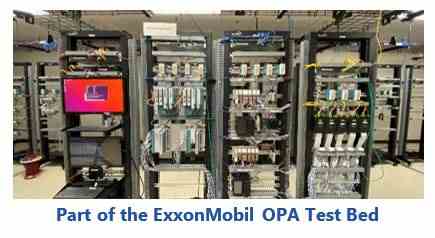 Yokogawa expressed their commitment to multi-vendor participation. When ARC asked about their neutrality, Yokogawa pointed out that their DCS business units normally purchase third party hardware and software for use in DCS projects. The work for ExxonMobil’s Field Trial did not require new business processes, rather just a few additional suppliers.

Demonstration at the ARC Forum

The main point of Yokogawa’s demonstration at the 2022 ARC Forum was to show visitors that OPA systems were mature enough to be a viable choice for today’s automation projects. Process industry end users are traditionally averse to admitting new technology into their automation installations. Recognizing this, O-PAS is designed as a “standard of standards.”  It includes many dominant existing industrial standards (for example OPC UA, IEC 61131, IEC 61499, ISA/IEC 62443, and others). The result is that O-PAS needs to define some new information/integration models and data storage formats to achieve its goals, but requires very little entirely new (unproven, undeployed) technology. None the less, many end users remain in a waiting posture, until the O-PAS 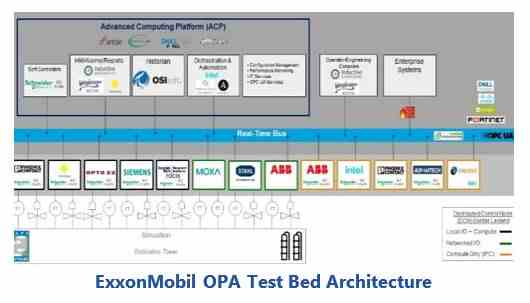 compliance certification program (now underway) is completed and includes a portfolio of certified products. ExxonMobil’s decision to move ahead to an OPA Field Trial was based on their evaluation of O-PAS technical readiness. Yokogawa’s demonstration was intended to illustrate this.

The demonstration consisted of a full stack of automation functions as well as a fully integrated legacy DCS. It provided these without the limitations and vendor lock in associated with current DCS technologies. These include:

Control and I/O: The O-PAS enables process control and I/O functions to be distributed and highly interoperable. In the demonstration, control and I/O was distributed across equipment from three different suppliers (R. Stahl, Phoenix Contact, and Yokogawa). Each of these distributed control nodes (DCNs) communicated with the rest of the system using the O-PAS connectivity framework (OCF) based on OPC UA. O-PAS outlines the data model and uses OPC UA throughout not only because it is popular, but because it is a context-based and extensible interoperability standard.

HMI and Computing: The primary HMI and the server for the OPA system was an Intel “NUC” (an Intel PC provided to developers). This device operated as an OPA Advanced Computing Platform (ACP). An ACP can perform many types of computing including function block execution, APC, analytics, optimization, historization, etc. In actual (and larger) OPA installations, ACPs would be hosted on industrial server hardware.

DCS Integration: Yokogawa also integrated a CENTUM VP Field Control Station and I/O was using an OPA gateway. This illustrated the ability of the OPA technology to coexist and interoperate with an installed DCS, which is a critical feature for technology adoption.

The vision of the Open Process Automation Forum is to make standards-based interoperability and portability “built in” throughout all elements of a process automation system, rather than “bolted on” to a proprietary vendor’s offering. This property enables a plant to manage and upgrade its automation installation incrementally and rapidly, without the burden of major system-wide upgrades, lengthy and complex integration or wholesale replacements that are necessary with today’s proprietary systems.

Yokogawa and other OPAF members are demonstrating that the realization of this vision is nearer than many think. Process automation end users should prepare now for this new automation architecture while they still have time to do so.