Since Industrial IoT/Industry 4.0 has been applied in the industry to boost digitalization and support new business models based on the use and analytics of digital data, the Edge has rapidly developed as a completely new area where IT and OT meet and need to be seamlessly connected. The edge started out to be just an interface between the fieldbus networks of the automation and control landscape to the enterprise and internet network landscape. Edge gateways were used as protocol converters to link different networks. However, it turned out that sending digital data from the OT assets (e.g., machinery) to remote clouds created new problems and risks, like data privacy or data tsunamis. With the concept of hybrid 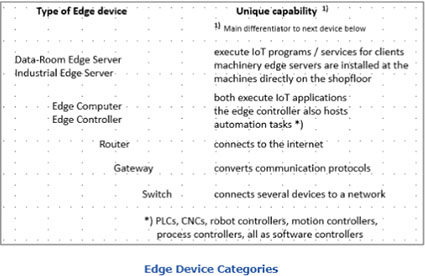 clouds, local clouds on the enterprise premises could handle strictly confidential data and forward only a subset of data to remote clouds to use the services of hyperscalers like Microsoft, Amazon, Google, and others. With local clouds, the edge has developed into a powerful computerized interface between the IT and OT landscapes. The picture shows the different edge devices now being in use at the edge.

Further to this rapid development of the edge to a new, powerful computerized area between the IT and OT landscapes, forward integration started a process to merge the different devices or functionalities into one. For example, routers have gateway and switch functions fully integrated. On the levels of edge servers, there are two classes: data room edge servers and machinery edge servers (industrial edge servers, ruggedized for operating directly on the machinery shop floor).

Industrial edge servers are an integral part of more complex, high-end machinery and production lines and connect to intelligent devices as clients in this machinery or production line, e.g., PC-based operator panels. Of course, such industrial edge servers communicate to the enterprise IT network and are the first place where the great amount of digital data are filtered to only send a subset of data onward to the enterprise IT for further analytics. That turns a machinery server into an edge server.

The evolution continues with a powerful computerized industrial edge server, and new applications come into play like AI-based machinery quality control. The saying goes – “Appetite comes when eating,” and this is why industrial edge servers may start out with just client-server functionality and interface communication to the enterprise IT systems, but sooner or later these edge servers will evolve into powerful edge computers that host many different edge computing applications.

As a last step in the ongoing forward integration trend, even machinery automation programs are operated from the edge server as soft PLCs or soft CNCs. As the traditional proprietary PLC becomes obsolete, only remote IO remain in the machinery. With this, the edge server covers not only integrated edge computing tasks but also edge controller tasks.

This market study may be purchased as a concise, executive-level PDF File.  It provides an executive-level summary of the current market dynamics, market forecasts, and competitive analysis, plus an overview of strategic issues  Studies and formats available are listed below: