Based on numerous engagements with end user clients over the past decades, ARC analysts have developed a comprehensive set of criteria and strategies to help you select an optimal Distributed Control System (DCS) to meet your needs now and in the future.

Over the past several years, Distributed Control Systems have undergone changes that signal the end of the traditional, largely proprietary, and monolithic DCS.  The proliferation of digital networks at the field level is changing the role and the demand for I/O in the control system.  While the nature of the physical I/O, control networks, and field networks is changing, technologies like the Industrial IoT (IIoT) are pushing change even faster.  IIoT consists of sensors and edge devices, internet technology, the Cloud, and analytics capabilities.

These aspects of IIoT are already having a huge impact on both asset management and operations management applications.  Recent open automation system initiatives spearheaded by major DCS end user companies such as ExxonMobil and Saudi Aramco will also have a tremendous impact on the DCS market moving forward.

The following are a few of the trends covered in this selection guide that should be major considerations, as owner-operators consider digital transformation of their distributed control systems.

DCS suppliers are defining a new generation of products in which industrial control systems will be virtualized and “software-defined” to a much greater degree than today.  This trend is epitomized by the Open Process Automation Forum (OPAF - a forum of The Open Group), an effort initiated by ExxonMobil in 2016.  This largely end user-driven initiative seeks to define “a standards-based, open, secure, and interoperable process control architecture that applies across multiple process industries.”  The functions of any DCS in today’s plants could be replaced by these new systems, which consist of both servers and small automation edge devices.  This trend in particular is an important consideration as you develop your strategic plan for keeping your plant’s industrial control systems (ICS) up to date. 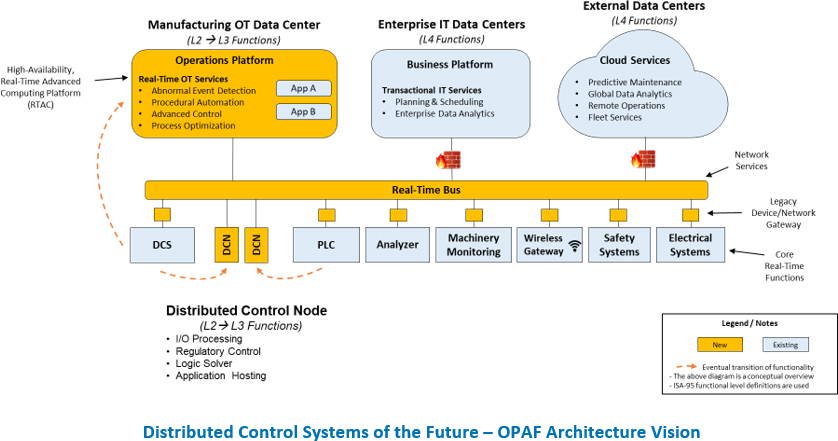 A growing set of ICS products are becoming available to develop application software and test systems in a fully virtualized environment.  To shorten and simplify field integration work, DCS and PLC suppliers have developed these virtualized solutions to be able to fully develop and test an ICS installation without requiring any of the target system hardware.  With this capability in hand, the ability to virtualize an operational (proprietary) DCS is not far off.  ARC expects multiple suppliers to offer it soon.

Many end users now rely on the expertise of suppliers to design and commission Ethernet networks with ultra-high availability and uninterrupted network service through multiple failure modes.  Providing the necessary degree of isolation between DCS and corporate network functions to ensure safety and security, while at the same time allowing appropriate information from the DCS to flow to enterprise networks, requires the knowledgeable use of servers and network infrastructure such as routers, switches, and firewalls.  Except for very large and sophisticated end users, most users now rely heavily on the expertise of their DCS suppliers here.

Cybersecurity is top-of-mind for many major DCS end users, especially after very costly cyberattacks on major oil & gas and refining industry sites in the Middle East.  The appearance of the Stuxnet malware in 2010 dramatically changed the general attitude toward cybersecurity for industrial automation systems and equipment.  Stuxnet demonstrated that malware can be deployed by nation states as a weapon of war as well as by hackers, malicious or otherwise.  Such weapons may be extremely difficult to develop but are also very difficult to trace to an individual, group, or country.  They may also prove widely effective against ’soft targets’ including relatively insecure industrial devices and systems.  DCS suppliers are addressing the cybersecurity threat with active initiatives, either in-house, through partnerships, or both.

Other global strategic business and technology developments such as Industry 4.0, Fieldbus and Wireless I/O, OPC UA TSN, Modular Automation, NAMUR Open Architecture (NOA), and much more are described in this selection guide.  The goal is to help you achieve your maximum return on your asset investment.  This ARC Selection Guide will help you select a solution that will meet your process automation needs now and in the future.

For more information on this technology guide or to discuss how we can help you, please contact us.