The concept of artificial intelligence (AI) has been floating around for years.  At first it was just an idea discussed at universities by stereotypical academics.  But is has emerged, first test cases have been developed and then, in the form of intelligent personal assistants (Siri, Cortana, Alexa), developed into something that we are confronted with in everyday life.  There are new developments almost every month – in January 2018 AI delivered ,for the first time, a better reading performance than a human.  It is only a matter of time, until AI will move into manufacturing. some OEMs are already involved in projects with universities.

The challenge here is not to use AI somewhere in the cloud for support, but to use it on the plant floor on a chip.  At the SPS/IPC/Drives show this year in Nuremberg only a few companies presented their solutions.  Among them was Intel, Cogito, a small start-up from Italy, and Mitsubishi Electric.  Cogito and Intel presented solutions around pattern recognition, which can be used for quality control.  While Intel’s solution on a chip was comparably slow (it used a standard FPGA), the Cogito solution is significantly faster.

Mitsubishi has already implemented its AI solution on a chip in air conditioning (so you know it has a competitive price point) and is now moving forward.

Mitsubishi Electric Corporation announced that it has developed a smart-control AI technology under its Maisart brand (Mitsubishi Electric's AI creates the State-of-the-ART in technology).  It enables devices such as industrial robots to understand and to adapt to changing conditions of target objects in real time.  The application of this AI technology in devices will simplify automation tasks, even in the case of dramatically changing conditions, such as adapting to the variable shape of a non-rigid object.  In a world of increasingly shortening product lifecycles this looks like a very compelling ability. 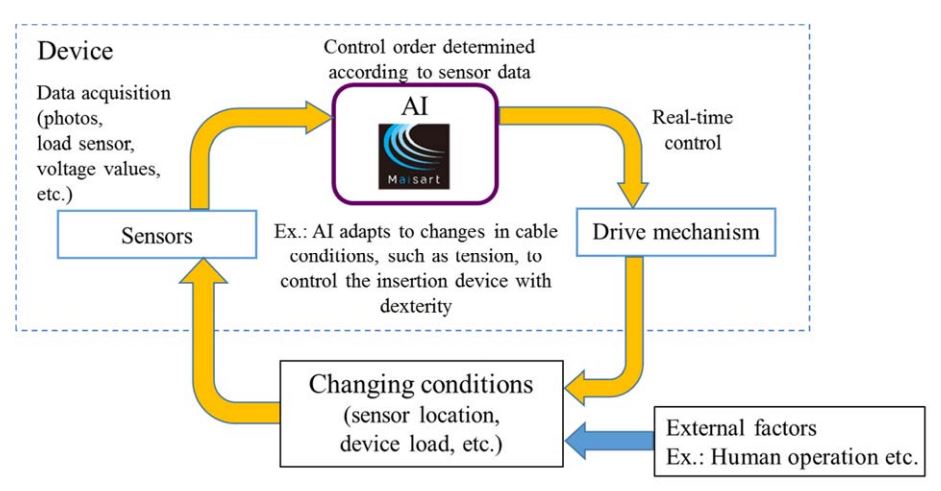 Certainly, there will be hesitations towards AI.  OEMs need to be willing to give up deterministic control to a system that develops outside of their sphere of influence.  Maybe a good analogy is management: you can either control and micro-manage everything or you teach your employees and trust them to do the right thing, once trained. Both are a shift in mindset and this takes much longer than to develop a new technology.

Where will this lead us? Hard to tell, but it appears to be like an accelerating Tsunami.  Just recently AI has even been used to make music compositions.