Are Autonomous Operations the Future of Process Industry?

Paragraph Bundles
What Is Autonomous Operations? Safety and Ethics of Autonomous Systems - Food for Thought for Industry

Before the current COVID-19 pandemic struck, ARC Advisory Group launched an ongoing survey in conjunction with CONTROL magazine to help ascertain the current status of autonomous operations among today’s operating companies as well as the current and future levels of maturity, deployment, and use.

The introduction of new digital technologies into operational technology at both the plant and enterprise levels offer the potential to augment people and processes to an unprecedented degree.  Advanced functions, such as artificial intelligence (AI) and machine learning (ML), are changing how people work in industry.  The central question the survey attempts to answer is “What role, if any, do autonomous operations now play in manufacturing plants and other industrial facilities, and what role will they play in the future?”

End users from across the process industries have already responded to the survey, with a major contingent coming from the chemical and upstream and downstream oil & gas sectors.  Although all world regions are represented, half the responses to date have been from North America.

The responses to the survey show that, currently, the best process operations are at a maturity level that, for lack of a better term, ARC defines as advanced regulatory.  The majority of responses show that over the next few years, the technology will allow appropriate plant operations to be run at a level of selected autonomy.  Several respondents believe that some plant operations might eventually reach full autonomy.

From a technology perspective, the ability to implement fully autonomous operations is fast approaching.  However, the decision to implement this must also consider safety, reliability, and cultural issues.

Transitioning operations from automated to completely autonomous is not a one-step process.  Moreover, the transition is not simply a technology decision.  In addition to safe and dependable operations, improvements to business effectiveness and value must be considered.  To help industrial organizations understand where they are in the journey to autonomous operations, ARC Advisory Group has developed the following five-level model.  Note that the lowest level of the model, level 0, describes operations with no automation whatsoever.  In these situations, the operation is totally dependent on humans making the necessary decisions and changes to keep the operation running.

Note that different parts of an industrial plant (e.g. units, lines, etc.) are likely to be at different maturity levels.  The decision to drive toward achieving autonomous operations will involve multiple factors related to available technology, personnel, processes, criticality, and business importance. 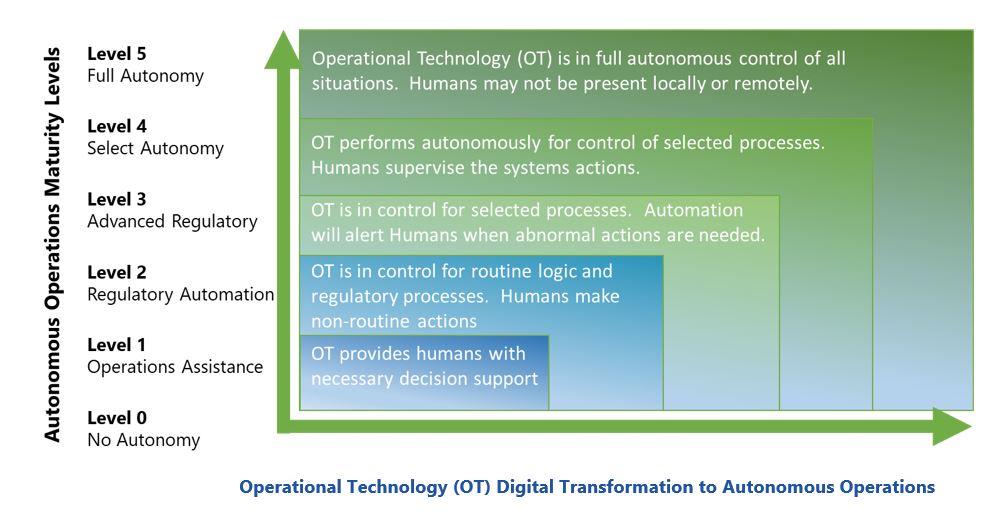 Level 0 - No Autonomy - is the starting point on the journey to autonomous operations in the maturity model.  Here, no automatic actions are occurring, with operations relying on humans to make all decisions and perform all functions.  Historically, most industrial operations began with significant human intervention required to run and maintain the operations.

Level 1 - Operations Assistance - is common in many companies today, at least in some parts of the operations.  It represents a minimum of automation technology and systems to run the operations.  Instead, the OT’s primary purpose is to provide data and information for decision support, so that human operators, maintenance technicians, planners, and so on can facilitate the mechanics of the operation.

Level 2 - Regulatory Automation - moves the degree of automatic control further along.  For process industries, this includes control functions such as continuous control loops (e.g., PID control) where the automation system maintains a specific setpoint by manipulating one or more process variables.  For example, the controller will manipulate a control valve, damper, pump, or motor to maintain measured process variables, such as pressures, levels, flows, and temperatures.