What Is Autonomous Operations?

Plant operations in the process industries have evolved over time toward Autonomous Operations by using generally well-integrated and well-applied digital automation technologies, such as distributed control systems (DCS), programmable logic controllers (PLC), safety integrated systems (SIS), and manufacturing execution systems (MES).  These plant-level technologies all fall under the domain of operations technology or “OT,” as distinguished from more enterprise-level information technology, or “IT”.   In general, OT focuses on safe, deterministic, and high availability for reliable, nonstop operations, while IT focuses on data integrity and security.

In recent years, thanks to further advances in digitalization, the ongoing convergence of OT and IT, and the overall digital transformation of industry and infrastructure, the process industries are gradually moving from “automated” to “autonomous” operations in selected areas.   This may also be referred to as "Autonomation". This move presents the opportunity to further advance safe operations and improve overall business value.  Furthermore, in addition to minimizing the inevitable human errors, autonomous operations could go a long way toward helping solve the growing issue of finding qualified personnel to run these facilities, many that operate continuously, 24/7.  With artificial intelligence (AI)-driven autonomous systems making decisions related to both normal and abnormal operations, this burden could potentially be removed from humans.

Transitioning operations from automated to completely autonomous is not a one-step process.  Moreover, the transition is not simply a technology decision.  In addition to safe and dependable operations, improvements to business effectiveness and value must be considered.  To help industrial organizations understand where they are in the journey to autonomous operations, ARC Advisory Group has developed the following five-level model.  Note that the lowest level of the model, level 0, describes operations with no automation whatsoever.  In these situations, the operation is totally dependent on humans making the necessary decisions and changes to keep the operation running.

Note that different parts of an industrial plant (e.g. units, lines, etc.) are likely to be at different maturity levels.  The decision to drive toward achieving autonomous operations will involve multiple factors related to available technology, personnel, processes, criticality, and business importance. 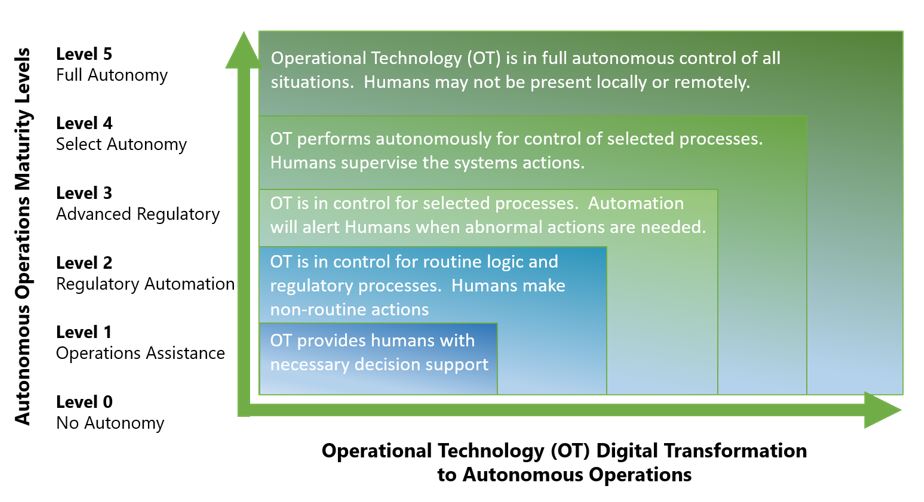 Level 0 No Autonomy is the starting point on the journey to autonomous operations in the maturity model.  Here, no automatic actions are occurring, with operations relying on humans to make all decisions and perform all functions. Historically, most industrial operations began with significant human intervention required to run and maintain the operations.

Level 1 Operations Assistance is common among many operations today, at least in some parts of the operations.  It represents a minimum of automation technology and systems to run the operations.  Instead, the OT primary purpose is to provide data and information for decision support, so that human operators, maintenance technicians, planners, and so on can facilitate the mechanics of the operation.

Level 2 Regulatory Automation moves the degree of automatic control further along.  For process industries, this includes control functions, such as continuous control loops (e.g., PID control), where the automation system maintains a specific setpoint by manipulating one or more process variables.  For example, the controller will manipulate a control valve to maintain a variable, such as flow, that is being measured continuously.

Level 3 Advanced Regulatory adds certain conditional information to the level 2 type of automation.  For example, a bottle labeling line with level 2 type of automation will simply paste a label on every bottle on the conveyor.  In level 3, the automation functions may be able to recognize bottles that are not full and automatically push them off the line rather than place a label on them.  In the process industries, a level 3 example would be the “exception logic” built into batch controllers designed to recognize most abnormal conditions and thus not continue producing an out-of-specification batch.  Level 3 type of automation, however, typically requires humans to be available for unexpected abnormalities that the automation programs were not designed to handle.

Level 4 Select Autonomy introduces the first true autonomous operations for certain situations.  For example, the level of automation may be able to detect the imminent failure of a pump and automatically transfer operations to a standby pump.  The autonomous system will notify humans both when it detects the impending failure and when it has changed the operations to the new pump.  However, at this level, it still requires humans to fix the operation conditions that caused the failure.  Humans would also be required to return the system to the autonomous operation state (e.g., repair or replace the failed pump).

Level 5 Full Autonomy is fully autonomous operation.  At this level of automation, humans may not be needed for any intervention.  Humans may be in remote locations, since their immediate presence is not required.  An example of this would be a mining operation where the haul trucks operate without drivers.  These vehicles would be able to detect when obstacles, such as humans, were in their path and avoid collisions on their way to deliver the ore.

Assessing Your Progress to Autonomous Operations

ARC has developed an assessment process that will allow you to determine where you are in comparison to your peers in industry.  If you wish to determine your progress in moving toward "Autonomous Operations", simply click hear “Assessment Survey”.