OSIsoft started out in 1980 by building advanced control software for refineries.  In the process of developing the software for advanced control, OSIsoft built a data collection system and transitioned from an advanced control company to focus on its data collection, historian, and visualization tools.  This seemed a bit odd at the time since all the distributed control system (DCS) suppliers had some form of data historian for their control system, so why would DCS end users need a separate historian?  Typically, these early DCS consoles had 25 hours of high-resolution history at most.   History beyond that time period was either not available or only useable from the console in an off-line mode, neither of which were suitable for process analysis and modeling to optimize control implementations.  OSIsoft had found a market niche that used its own data

collecting interfaces to the major DCS and PLC systems and its database repository to create a valuable software product that enabled self-service data access and analysis.

These interfaces were built with reliability and security in mind as the initial plan was to use this data within advanced control projects that would manipulate hazardous processes like those found in refineries, chemical plants, power plants, and other process industries.  These data from DCS and PLC systems consisted of real-time measurements that could be used to manipulate valves, pumps, motors, and solenoids.  This helped OSIsoft create a solid industrial data historian with the tools to share that data with other industrial applications.  Obtaining the right data and maintaining data quality have emerged as key enablers for digital transformation.  The OSIsoft software can ensure that every datapoint captures the DCS value, validity status, and timestamp.  Whether used for advanced control, monitoring, or for operating statistics, it’s essential to handle data validity and data timestamping correctly.

Streaming real-time data in process plants needs to be trended in real time.  Historical data, in turn, needs to be trended over weeks, months, and years.  Here is where OSIsoft began to distinguish itself from DCS and SCADA trending.  In most plants, the use of X-Windows and remote desktop applications are restricted to authorized operators and essentially forbidden on the corporate network.  Yet, various supervisors, engineers, and managers wanted to see operating data, and they often preferred a graphical, dashboard-like display, rather than the detailed displays used by control room operators.  Early on, OSIsoft created a graphical user interface called “PI Process Book” and, over time, added web visualization tools like “PI Vision.”  In order to organize vast amounts of data, OSIsoft eventually created and evolved a configurable feature of PI Server called Asset Framework (AF) that allows users to add context, create an asset hierarchy, and deploy calculations.  Today, PI Vision and AF are critical parts of OSIsoft’s software suite (known holistically as the PI System). 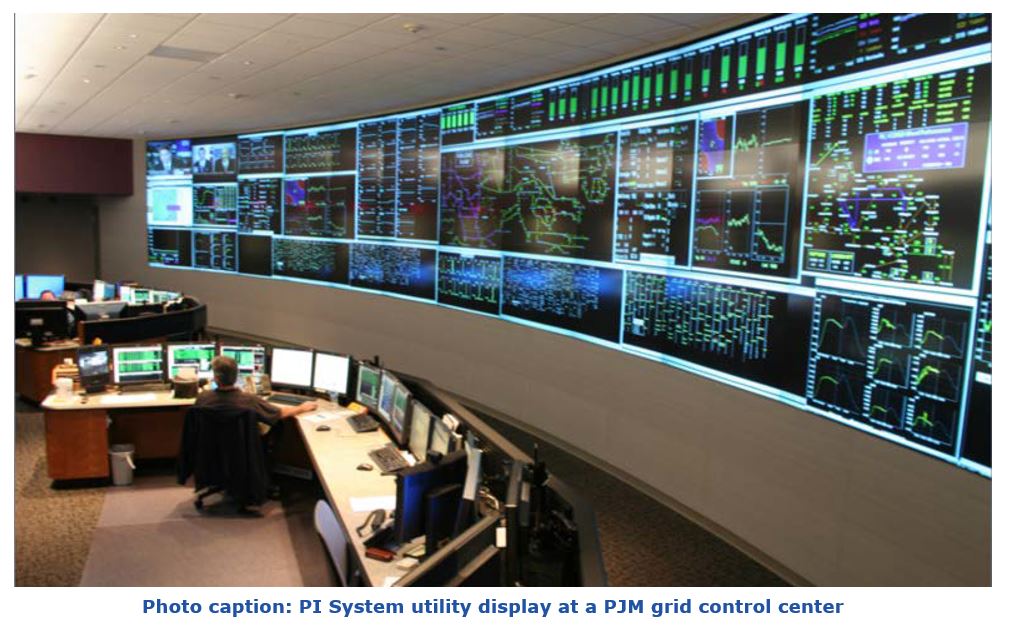 It did not take long for process owners to see the advantage of OSIsoft’s historian system to augment control system functions, and it became standard practice in many control rooms to have OSIsoft displays complement the DCS displays.  In the refinery and chemical industry, it is quite common to see the control room operator with two sets of display consoles: one set from the DCS system that is securely isolated from the internet and a second set of displays that are connected to the corporate network.  The latter feature PI System displays and trends, but also connects the operator to e-mail and other business applications.  Today, the PI System is used across many industries.  For example, the grid control rooms used by the utility industry have found the PI System’s ability to collect and organize millions of data points from a wide range of SCADA systems, control systems, substation automation, and internet and cloud databases very useful to maintain situational awareness of large sections of the electric grid.

How will the AVEVA acquisition help OSIsoft grow?

There are a lot of synergies and potential for OSIsoft to continue its growth with AVEVA.   OSIsoft’s technology is well established in the process industry, but the market is far from saturated, with plenty of room for growth in chemical; oil; gas; paper; pharmaceuticals; food; and power generation, transmission, and distribution.  Existing PI System installations continue to add datapoints to the collection system and new users and applications.  It has proven difficult for competitors to create a product with the flexible features, connectivity, reliability and security of the PI System data platform that is valued by the larger process industries.  The value that can be extracted from real-time streaming data varies with scale, so smaller process sites may opt for lower cost options that work out of the box with minimal customization.

OSIsoft has also been expanding into the discrete manufacturing industries and could expand more into these industries.  Recording batch records in chemicals, food, and pharmaceuticals is a common PI System application with interfaces into ERP systems and cloud applications.  However, the PI System platform has more competition in the discrete part industries, which have established database structures that reach into the supply chain and inventory management systems automation using robotics, bar code readers, RFID, Q-codes, video cameras with pattern recognition, and packaging machinery.

OSIsoft has developed over 450 standard interfaces to different data sources, enabling hundreds of independent systems integrators to link PI System data to other software applications to create custom implementations for end users.  This is one reason it has become the dominant data platform supplier in the process automation market.  Many systems integrators and technology suppliers use the PI System application development environment, and these applications can provide significant value to end users that often do not have the staff or expertise to build such applications in house.

What can AVEVA do to enhance the OSIsoft products and services?

Certainly, AVEVA, as a leading global supplier of industrial software, needs to continue to support the many PI System integrators and partners with access to support and new product development.  AVEVA experts

should work with OSIsoft development to support new enhancements and the volume of industrial data needed for the digital transformation.  AVEVA expertise in developing platform-independent software for the process industries could certainly be helpful in the area of interfaces, security, and cloud services.  OSIsoft has PI Server integration to AWS and Google Cloud for advanced analytics, and a new edition of its PI Cloud and PI Edge platforms, all areas in which AVEVA could help OSIsoft further develop these capabilities.  AVEVA’s solutions provide a nice complement by providing a high-fidelity, high-performance information retrieval, organization, and summarization layer. 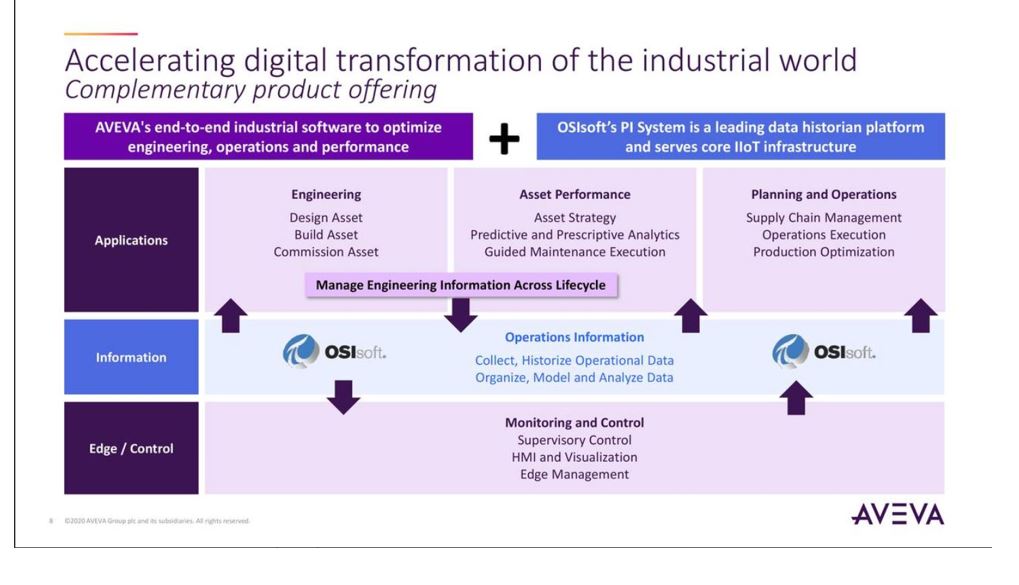 It will be important for AVEVA to keep OSIsoft as a neutral, platform-independent supplier where end users with any control system, industrial applications, or other data source feel fully supported.  The Wonderware, AVEVA Historian, AVEVA Enterprise Data Management, and AVEVA Plant SCADA offers all have data historian applications that might compete with the OSIsoft platform.  The arrival of the more dominant PI System in this playing field will require AVEVA to exert managerial skills to rationalize products, retain subject management experts, and restructure software development teamwork.  This is certainly something ARC will be watching.