Convergence of IT and OT Headlines SPS 2019

Against a background of negative reports for Germany’s economy in 2019 and 2020, the SPS trade fair opened its gates in late November to welcome visitors from around the world. The number of visitors, which peaked at 70,000 in the boom years of 2017 and 2018, settled back to 2016 levels of about 63,000 in 2019. Despite a cooling off in demand for German machinery in key markets such as China and the US, the mood at the fair was upbeat and exhibitors seemed pleased with the turnout.

The SPS trade fair celebrated its 30th anniversary this year with a name change. The awkward moniker “SPS IPC Drives” has been shortened to just “SPS,” which itself has been changed to mean “smart production solutions.” The name change is actually quite clever – it preserves the strong “SPS” brand while simultaneously shedding the names of a few automation devices that were the core of many automation systems 30 years ago (“SPS” is German for “PLC”). 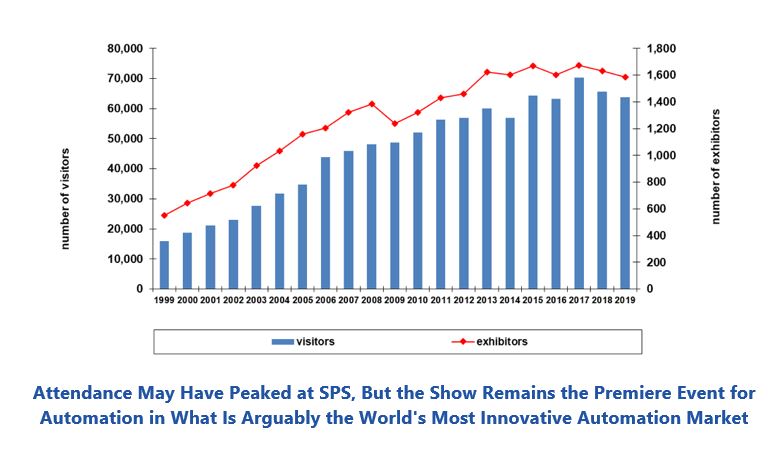 The SPS show, which has grown with the market over three decades, accurately reflects the current evolution taking place. Much of the growth in exhibitors in recent years has come from IT companies that have recognized the business potential of industrial markets, where information technology is playing an increasingly important role and digitalization and Industrial IoT-enabled solutions are gaining traction.

Where OT and IT Converge

The influence of commercial IT on industrial automation technologies started to increase about a decade ago and the pace really picked up when the German government’s Industrie 4.0 initiative jump-started the digitalization movement in 2011. By 2016 the first signs of “digitalized” products and solutions for automation began to appear, from edge computers to cloud-based analytics. At the same time, startup companies – rare birds in the industrial world – began exhibiting at industry exhibitions.

As Europe’s premiere discrete automation trade fair, SPS attracts major IT suppliers, such as Cisco, Intel, Microsoft, SAP, and even the German Telekom. While these companies mostly offer infrastructure for manufacturing environments, all are growing their application-specific knowledge, and many are partnering closely with automation suppliers to offer turnkey Industrial IoT-ready solutions for manufacturing and other industrial users.

What Are the Industry Associations and Consortia Saying?

In addition to industrial suppliers, German trade fairs are popular with industrial trade organizations that track industry-specific statistics, promote standards, and even lobby the government for their clients. All relevant organizations exhibit at SPS, so it’s a great place to find out the latest quarterly numbers for various industry segments.

The VDMA (German Mechanical Engineering Industry Association) reported that the upward trend in electrical automation did not continue in 2019 as the industry was affected by the general economic slowdown. Incoming orders fell by 2 percent and sales growth stagnated compared with the same period of the previous year. The association anticipates a sales decline of 1 percent for 2019 as a whole. The export business was able to compensate to some extent for the decline in domestic sales: foreign orders grew by 2 percent, and foreign sales by 3 percent.

For 2020, VDMA anticipates a 4 percent drop in sales due largely to the continued weakening of the global economy and the existing trade conflicts between the USA and China. Current order backlogs will also decline in 2020 and no longer be able to compensate for the sales decline.

VDMA announced the publication of a new guideline "Value Creation from Machine Data 4.0" (in German) that helps machine builders identify advantages from the use of machine data. Another topic for machine builders is 5G. VDMA emphasizes the important role that wireless communication with 5G will play in the manufacturing industry in areas such as smart production, networked machines, wireless sensor technology, and intelligent mobility.

ZVEI, the German Electrical and Electronic Manufacturers' Association, reported a volume of 160 billion euros of its industry’s exports for the first nine months of 2019 - an increase of 3.2 percent compared to the same period last year. Yet, exports remain practically the only figure that developed positively in the first three quarters of 2019. By contrast, incoming orders, production, and sales all declined. For the next six months, 17 percent of the member companies assume that business will pick up, while 58 percent see a stagnation, and 25 percent expect a decline.

ZVEI presented the Digital Nameplate 4.0, a project of ZVEI and the Helmut Schmidt University in Hamburg. At SPS 2019, the nameplate was presented with a demonstrator. As a partial model of the administration shell (AAS), which the ZVEI developed from the Industry 4.0 reference model (RAMI4.0), the "digital nameplate" offers added value for production by making necessary information available along the entire value chain.

About a dozen ARC analysts made the rounds at the SPS show. Our key company- and product-related takeaways follow.

ABB is expanding its offering for digitalization under its ABB Ability banner. At SPS, the company presented ABB Ability verification for measurement devices to check measurement accuracy without having to remove the devices from the production process. The scope of ABB Ability Digital Powertrain concept that connects drives, motors, pumps and bearings has been extended by a new condition-based maintenance service option for drives. The range of Slimline XR low-voltage switch fuse disconnectors has been upgraded, reducing power losses by up to 35 percent and increasing potential space savings. Devices can now also access a range of remote supervision and operation functions and connect to the ABB Ability cloud platform. Furthermore, ABB launched a smart temperature monitoring relay that covers a range of customer needs with just one device. This reduces the need to stock, manage and configure many different devices.

B&R and ABB announced the first fully integrated machine-centric robotics solution since ABB Robotics and B&R Industrial Automation merged. The solution eliminates the need for a dedicated robotics controller, a separate control cabinet, and specialists for specific robotics languages. According to the company, this reduces both the time and cost for engineering and development, while lowering the threshold for companies looking to implement robotics in production machinery.

Bosch Rexroth presented ctrlX AUTOMATION, an open automation platform designed to eradicate the traditional boundaries between machine control systems, IT, and the IoT. The scalable platform allows the flexible creation of centralized and decentralized automation topologies. According to Bosch Rexroth, the solution can reduce the engineering time and effort by 30 to 50 percent thanks to a Linux real-time operating system, open standards, app programming technology, web-based engineering, and a comprehensive IoT connection.

At first glance, ctrlX may look like just another automation platform, but the company plans to incorporate IoT functionality typically not found on other platforms, such as cloud-based device management and built-in cybersecurity.

At its centralized booth, Mitsubishi Electric emphasized its e-F@ctory network. In cooperation with partners, the company showed approaches and solutions for predictive and preventive maintenance, integration and networks, cost-efficient and compact solutions, performance and quality solutions, and data collection and analytics. Showcased solutions included: GOT Drive to integrate maintenance functions from a single source, MELFA SmartPlus for visualizing robot condition, Servo Open Network solution, Asyril Solution that combines robot and feeding, and iQ-Retrofit for backward compatibility.