ARC Advisory Group has been writing about the compelling case for fleet electrification over the last year including here, here, and here. In short, companies are starting to turn to electric powertrains to avoid the various pitfalls of diesel (and gasoline for lighter-duty vehicles) such as:
•    High fuel expenditure
•    Extensive maintenance requirements
•    Operator exposure to exhaust, noise, vibration
•    Business exposure to pollution regulation
•    Corporate social responsibility/public relations

One aspect we haven’t discussed yet is price volatility. As diesel is the fuel of choice for heavier duty use cases in logistics and off-road vehicles in construction, agriculture, and mining, that is what we’ll focus on.

In addition to the negative public relations, exposure to activist and regulatory pressure, high maintenance costs, and the health hazards for workers and communities that diesel brings, businesses are also exposed to volatile prices for their fuel. The figure below shows nine years of US energy price data. The price of diesel has been almost 10 times more volatile than that of commercial electricity over the period (when measured as standard deviation as a percentage of mean). 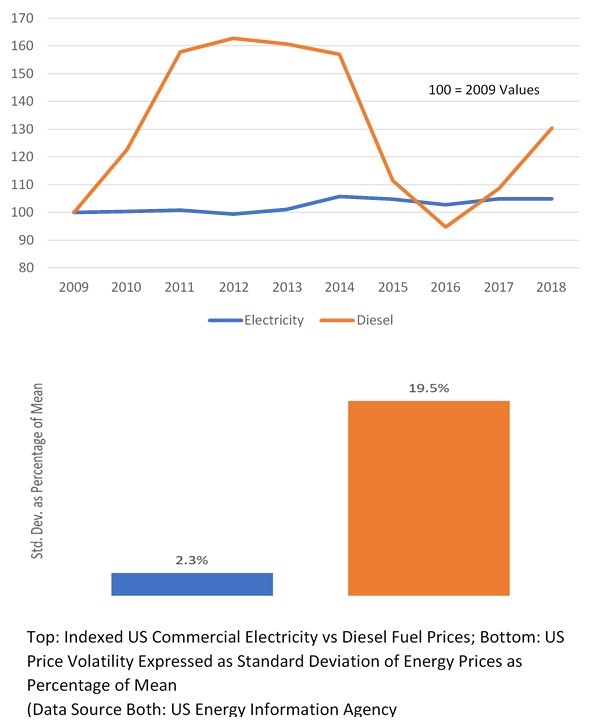 Beginning in 2020 the International Maritime Organization (IMO), the UN agency responsible for shipping, will begin to enforce new emissions rules targeting sulfur content in ship exhaust. Sulfur oxides emitted into the atmosphere are known to cause concerning ecological effects as well as respiratory issues in humans, an issue arising in coastal communities near ports and major shipping routes. The new rules set emissions caps at 0.5 percent by weight, compared to the present 3.5 percent cap.

Shippers have two major options to comply: to install scrubbers which would remove enough sulfur to pass, or purchase lower-sulfur fuel. To date, very few ships have been fitted with scrubbing equipment, so oil markets expect a major shift in demand from the maritime sector. Marine gasoil will be the likely new choice, and higher demand for this fuel will hike demand for the requisite middle distillate petroleum fraction used to make it. Though not directly governed by the regulations, the price of diesel is expected to rise dramatically as it shares this same middle distillate progenitor with marine gasoil.

Input price fluctuations of thirty or forty percent in a single year are a major headache for business owners, and signs point to diesel volatility becoming more of a hassle for commercial use cases in the near future. Fleets already have plenty of reason to go electric, and this will only push them closer to making the switch.