The first Digital Transformation Council (DTC) Asia webinar, titled The Promise of Open Process Automation, was hosted by ARC Advisory Group, India in November.  ARC Advisory Group’s DTC for the end user community seeks to enable industry professionals driving, or impacted by, digital transformation to keep abreast of the many emerging technologies and business trends, to learn from others on similar journeys, and to leverage these trends and technologies to achieve transformational growth.  To join the DTC (end users only) please click on this link.

G. Ganapathiraman, Vice President and General Manager, ARC Advisory Group, India gave a brief introduction of the DTC, the agenda of the DTC Asia, and the process to be followed during the webinar.  Then the baton was passed on to Bob Gill, General Manager, Southeast Asia, ARC Advisory Group; followed by a lively Q&A session with Divyang Shah, Group Lead – Instrument Reliability, CoE REAM, Reliance Industries Limited (RIL).

The Promise of Open Process Automation

Bob Gill began his presentation by speaking about digital transformation that heralds the arrival and availability of a host of new technologies (cloud, edge, IoT, machine learning, artificial intelligence, advanced analytics, digital twin technology, virtual/augmented reality, and 5G cellular networks) that enable improvements in operational and asset performance, and the development of profitable business models.  Next, Mr. Gill spoke about the industry trends and challenges that cover the gamut of pressure to lower costs, cyber-attacks, ageing systems and assets, loss/lack of skills, etc. 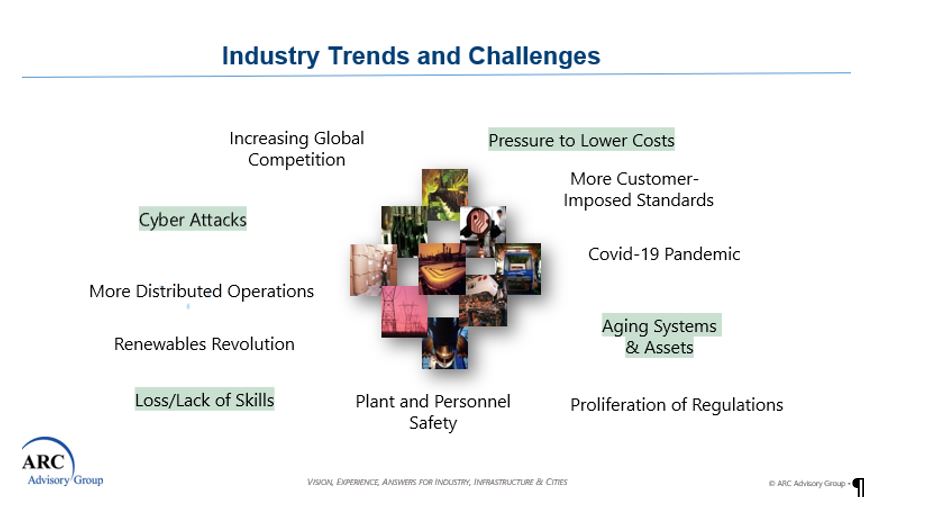 In this context, he spoke about the distributed control systems (DCS) in process industries.  These represent a significant investment and require specialist training to operate and maintain, and their lifespan can extend up to three decades.  However, these control systems are available only from a small set of suppliers who account for more than 80 percent of the current DCS market.  End users typically don’t switch suppliers for the simple reason that it costs a lot to do so – in terms of equipment and training.

So, a few years ago, one of the major end users, ExxonMobil, began questioning this approach of essentially having “closed control systems.”  Keynote presentations by Don Bartusiak (then Chief Engineer of ExxonMobil Research and Engineering) at the ARC Industry Forums in Orlando highlighted the challenges, deficiencies, and its vision of a new control system.  The business objective is to reduce capital and lifecycle costs and achieve greater profitability from investments in control systems.  The new control system should be standard-based, open, secure, with an interoperable control architecture; and applicable to greenfield, brownfield sites, and all current DCS markets.  Moreover, the new control system should be commercially available and not restricted to the oil and gas petrochemical sectors that ExxonMobil is typically involved in.  To accelerate the pace of development, ExxonMobil began looking outside – i.e. at the experience of other industries, such as avionics and telecom.  Hence, they worked very closely with Lockheed Martin (avionics) to design a new process automation architecture.  Thus, in 2016, the Open Process Automation Forum (OPAF) that operates under the auspices of the Open Group was formed.  The OPAF is comprised of end users, suppliers, standards organizations, system integrators, and consulting companies, such as ARC Advisory Group.  The OPAF members and ExxonMobil have kept ARC updated about current happenings and future plans.

Further, Mr. Gill showed and explained the contrast between the Purdue and O-PAS technical architecture concepts.  The Purdue model illustrates the hierarchical configuration of systems in place in most plants today that tend to be proprietary.  Whereas, the O-PAS (Open Process Automation Standard) architecture provides interoperability between systems and layers as it has a distributed control node (DCN), O-PAS connectivity framework, and an advanced computing platform.

After Mr. Gill’s presentation that provided the background and explained the OPAF’s objectives, Divyang Shah of Reliance Industries fielded the questions about his company’s experience and implementing Open Process Automation.

Giving a brief overview of the company, Mr. Shah said that Reliance Industries (a Fortune Global 500 company) is “made in India, made for India, and made by Indians.”  The company is harnessing the power of new technologies to fire its diverse growth engines.  The three new mega growth engines in the last decade are:  Jio, connecting Indians digitally (398 million subscribers in less than four years); Reliance Retail (11,800 stores across the country); and O2C (Oil to Chemical) business.  Further, he spoke about the strategic investments made by global companies, partnerships, and the income and market capitalization growth.

The first set of questions were about the department’s and Mr. Shah’s role in RIL; and the divergent control systems and the problems faced.  The next set focused on the OPA and its benefits to the company.

Mr. Shah replied that RIL has multiple refineries and petrochemical sites with a common Center of Excellence (CoE) located at Reliance Corporate Park (RCP) in Navi Mumbai, and that he is part of the CoE group for the Oil to Chemical (O2C) business.  The group is accountable for governance of reliability, engineering, and asset management functionality, and they develop guidelines, best practices, standards and lifecycle plans.  For this group he takes care of control systems/rotary control systems and a few sites for cybersecurity implementation, and he is also part of the Reliance OPA team (12 members).

There are 130+ DCS and 5,000+ PLC across Reliance sites, and these are supplied by all the standard manufacturers.  The company has systems installed in 1994-1995 that are still running, so it has operating systems from DOS to Windows 10.  The main problem associated with operating these divergent control systems is that the Microsoft operating system (OS) platform becomes obsolete in 7-8 years, and then security patches are not available, and the vulnerabilities are exposed.  If you want to upgrade the control system, the firmware upgrade of the controllers needs to be done as well.  The upgradation is done during plant shutdowns, which are done after 3-7 years.  This will necessitate upgrades during every shutdown and that works out to be expensive.  The next step is to train people to run and maintain the system.

Most end users operating multiple plants face these issues, said Mr. Shah.  Hence, the company joined the OPAF in 2017 and became a collaboration partner with ExxonMobil in 2020.  Based on the objectives of OPA-S (Open Process Automation Standard), RIL is confident that all its issues will be addressed.  OPA-S is a standards-based architecture that enables development of fit-to-purpose systems, comprising elements from different suppliers and integrated easily via modular architecture, characterized by open standard interface.  The benefits are multi-fold:

Concluding the Q&A session, Mr. Shah spoke about the collaboration with ExxonMobil, the monthly technical meetings, testbed, discussions with multiple vendors, and finalizing the scope.