As we often discuss on Smart City Viewpoints, drivers have been upgrading to electric mobility by the millions, yet some of the most exciting and impactful action is happening on the fleet and commercial side. Delivery vans and trucks, public transit, ride-hail, and even construction fleets are moving in this direction, drawn by overwhelming benefits financial and otherwise. In this article, we will explore the potential for electrified law enforcement fleets to reduce costs, emissions, and better serve the community. 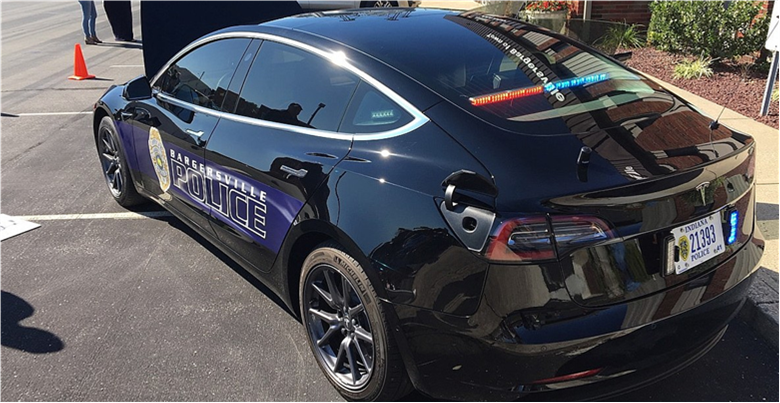 Electric vehicles are cheaper to operate than those powered by fossil fuels.

To start, electric powertrains have lower energy costs on a per-mile basis than internal combustion engines. They convert energy into motion more efficiently, with today’s battery electric vehicles attaining approximately three times the miles-per-gallon equivalent (MPGe) of comparable fossil-fueled vehicles.
Beyond the lower energy costs, EVs have fewer moving parts and forgo liquid fuels entirely. Below is a list of part replacements/maintenance/issues that EV operators do not need to worry about:

Thanks to their simplicity and lower number of moving parts, EVs also last longer than legacy vehicles do, and emit far less CO2 and air pollutants.

Bargersville, Indiana is a small suburb of Indianapolis. In 2018, the community was rapidly expanding and in need of new officers to serve the growing population. Property tax revenue lags behind growth, so the town’s police chief set out looking for cost savings to make the new hires he needed.  According to chief Todd Bertram, “I was looking through the budget and one of the biggest line items we had…was fuel and maintenance. If I didn’t have to pay for those, that’s two more officers”.

The town decided to purchase Tesla Model 3s to replace a few retiring Dodge Chargers. In the first year with the Teslas, the department recorded cost savings of over $6,000 in fuel and maintenance per vehicle compared with the Dodge Chargers in the fleet with officers driving around 22,000 miles annually, despite abnormally low gas prices during the period. This one-year cost savings was slightly greater than the price premium paid for the EVs and charging equipment upfront.

Furthermore, the Teslas came with a 120,000-mile warranty, compared to the Dodge Chargers’ 100,000. Since the department keeps its vehicles until the warranties expire, they get about four and a half years out of the Chargers but expect about six years for the Teslas.  By the end of their service, the Chargers have a total cost of ownership, excluding sale on the secondary market, of sixty-five cents per mile. The Teslas cost just thirty-seven cents, saving the department forty-three percent in total vehicle expenditure.

Dramatic cost savings weren’t the only benefit of electrification.  Even though roughly two-thirds of the electricity Bargersville uses is generated from thermal coal (as is common in the state), the police department’s Model 3s had a roughly sixty percent lower carbon intensity than the Chargers, with each vehicle saving over 14,000 pounds of CO2 emissions per year. As Indiana continues to clean up its power sector, with natural gas replacing coal and more wind capacity coming online each year, emissions for the EVs will continue to drop.

Not only did cost and emissions improvements surpass expectations, but the citizens provided almost exclusively positive feedback around the upgrade. With the Model 3’s superior performance and instant torque, the officers were satisfied too. When an officer with a Model 3 is temporarily assigned one of the legacy vehicles, “It’s like you took their birthday away”, according to the chief.  The town now plans to replace the rest of its cruiser fleet with Teslas, adding some of the larger Model Y vehicles for officers who would prefer the size.

Making it a Reality

Clearly, electrification can be a winning proposition for law enforcement, but the transition needs to work in practice. Much depends on the mission profile of the vehicles. Bargersville PD assigns vehicles to individual officers, who charge their cruisers using inexpensive “level 2” chargers (~7 kW; a few hours to full battery) at home between shifts. Many other departments have hot car/vehicle pool arrangements, where officers choose from available vehicles at the start of their shift. For these arrangements, the vehicles could charge at the station in between shifts. For departments where vehicles work three back-to-back eight-hour shifts each day, Bargersville’s police chief suggests officers charge when they drop into the station to file reports, as he often does. Combined with an occasional DC-Fast charging session, even these fleet arrangements could work with EVs. When EVs aren’t at all suitable for the mission, police departments can still turn to hybrid electric vehicles to take advantage of start-and-stop and low-speed driving to often double their fuel economy.

Having to do more with less is nothing new for public agencies, but coming out of 2020 the challenges will be even greater, especially for police departments. With approximately 400,000 police cruisers in the US alone, electrification of even half the fleet would result in billions of dollars in operating cost savings, and billions of pounds of CO2 emissions averted. Given the environmental and human health benefits, electrification would also work to improve law enforcement’s image in the eyes of the public at a time when this is needed most.