The worldwide enterprise software market continued to grow in the second quarter of 2018.  This market expanded on the back of relentless innovation and available capital.  Once again, exchange rates played a role, with the strengthening of the euro relative to the US dollar.  This 8.5 percent exchange rate fluctuation provided a healthy lift to revenues reported in euros that ARC subsequently translated to US dollars for this report. 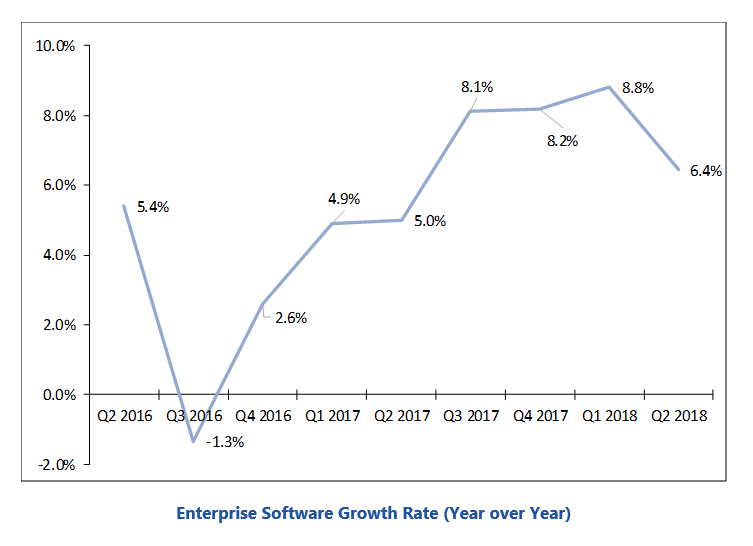 This ARC Advisory Group report discusses the most recent quarterly revenue results of the major publicly traded enterprise software companies.  We translated financial results reported in foreign currencies to US dollars using an average exchange rate for the given reporting period.  The suppliers’ reporting period for this analysis was the quarter ending in June 2018, unless stated otherwise.

While this report focuses on the enterprise software portion for the respective companies mentioned, the R&D expenses shown are a factor of total company revenues.

Hexagon’s Industrial Enterprise Solutions (IES) division consists of the manufacturing- and engineering-focused businesses: Hexagon Metrology and Intergraph PP&M.  The division focuses on engineering software for creating and leveraging information critical for planning, constructing, and operating plants and process facilities, as well as for computer-aided design (CAD) and computer-aided manufacturing (CAM) software and metrology systems.  The division reported $575.1 million in revenue for the quarter.  This represents an increase of 17.9 percent year over year.  In reporting currency (euro), the company increased its revenues by 8.6 percent.  Geographically, 33 percent of revenues came from the Americas, 37 percent from EMEA, and 30 percent from Asia.

IBM’s software segment reported revenue of $4.58 billion in external sales for the quarter.  This represents a slight increase of 0.5 percent over the same period last year.  Under the company’s new segment reporting structure, total software no longer exists as a segment.  Instead, the company’s software revenue is included within the technology services & cloud platforms, cognitive solutions, and systems segments.  Revenues from the solutions software (part of cognitive solutions) was flat year to year, whereas operating systems software (part of systems segments) and integration software (part of technology services & cloud platforms) increased by 25 percent, and 2 percent, respectively.

IFS reported $134.8 million in revenue for the quarter, which represents an increase of 29.8 percent year over year.  License revenue increased by 54.3 percent, maintenance by 35.1 percent, and consulting revenue by 14.7 percent.  IFS, the global enterprise applications company, acquired WorkWave LLC (“WorkWave”).  The addition of WorkWave means that IFS now offers the most complete, connected service management solutions for all sizes of service-centric businesses.  IFS has made several acquisitions in the service market this year, which are helping accelerate the company’s growth.

Infor reported revenue of $782.7 million for the quarter ending July 2018.  This represents 3 percent growth from the prior year. Revenues from license fees increased by 10.6 percent, product update and support declined slightly by 0.1 percent, and consulting services and other fees increased by 1 percent.  From a regional perspective, revenues from the Americas contributed 63 percent, EMEA 31 percent, and Asia Pacific 6 percent to Infor’s revenues.

Manhattan Associates’ revenues decreased by 8 percent year over year to $141.9 million.  Revenues from the Americas declined by 8.7 percent, EMEA by 3.1 percent, and APAC by 10.5 percent.  Digital commerce and technology modernization programs continue to drive significant long-term growth opportunities for the company.  Management stated that the demand for omni-channel, store, and distribution management solutions continued to increase.  Global license revenues declined by 18.2 percent to $18.4 million.  Services revenues increased by 2.1 percent to $119.3 million.  Hardware & other revenues decreased by 71.3 percent to $4.3 million.