Earlier this month, Swedish telecom company Ericsson announced their intention to acquire leading cellular network provider Cradlepoint, a competitor to Cisco, Digi International, Sierra Wireless, and others.  The company’s stated intent for the acquisition is to boost its 5G and IoT growth initiatives and to help their primary customers, network service providers, grow their revenue base into new verticals.

Cradlepoint’s cloud-centric, subscription-based solutions and focus on LTE are a good match for these aspirations, and the two companies were already partnering on 4G and private wireless.  The $1.1 billion acquisition also provides the approximately $130 million Cradlepoint with a platform for global expansion beyond its current base in North America via access to Ericsson’s global ecosystem.  Cradlepoint serves a broad swath of applications, ranging from retail, healthcare, and public safety to smart cities and IoT.

Bridging the Gap Between Network Operator Capabilities and Industrial Requirements

5G, LTE, and private wireless all hold the potential to migrate use of cellular connectivity in industrial applications from remote access and backup failover applications to a more prominent role as a primary communications medium.  Manufacturers on the leading edge of private wireless trials, particularly in Germany and Europe, see the technology as enabling the flexibility and configurability capabilities that underpin the Industrie 4.0 value proposition, among other benefits.

This prospect is not lost on the global telecom providers, all of whom are looking to expand their reach into industrial 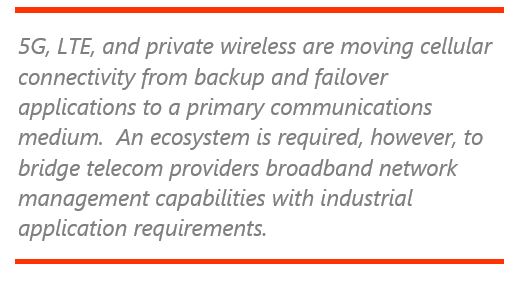 applications via their 5G, private wireless, and IoT platform offerings.  Ericsson’s comments on the acquisition reflect this pursuit, including their desire to double the share of total connectivity that cellular represents.

As ARC’s current update of our industrial cellular router coverage indicates, however, a yawning gap exists between the core competencies of telecom network operators and the operational requirements of industrial facilities.  This sentiment was echoed recently by one of Ericsson’s own industrial partners, the Paris airport authority (Charles de Gaulle, Orly and Le Bourget), whose conclusions from a trial private LTE installation included the need for an ecosystem to marry the telecom provider’s network management capabilities with an understanding of the operation’s particular functional requirements.

The Cradlepoint acquisition helps Ericsson bridge this gap by extending their wireless WAN offering deeper into the endpoints themselves and providing visibility beyond management of the broadband public network.  Cellular providers, in general, are heavily reliant on their channel for delivery of application and customer-specific solutions, which is where the emerging gap is increasingly evident as these companies strive to move into primary roles in industrial connectivity.

Industrial customers need partners and providers who understand the nuances and requirements of their operations.  We expect continued acquisition and partnering activity as telecom operators look to bridge this gap between their core network operator competencies and the functional requirements of targeted industrial operations.

Further information on ARC’s coverage of the industrial IoT network edge can be found here.