The Future of Mobility

Transportation is one of the fastest changing and most exciting sectors in the global economy today. Connected and autonomous vehicles, shared mobility concepts, and the shift to electric vehicles are some of the most exciting avenues. Increasingly, the acronym, “CASE,” which stands for Connectivity, Autonomous, Sharing/Subscription and Electrification is being used to refer to this shift.

At a dedicated session on the “Future of Mobility” at the 2020 ARC Industry Forum in Orlando, Florida, four leaders in the mobility space joined us to share their perspectives and experiences around the CASE transition.

To start the session, ARC Advisory Group summarized some of the shortcomings of the current transportation system based on statistics from the US government and other sources:

These issues are driven by a century-old paradigm: the use of private, low-occupancy fossil fuel-powered vehicles for nearly every journey, operated by error-prone, and increasingly distracted, human drivers.

A previous Forum session focused on the shift to electric powertrains, which can help mitigate the human health and environmental impacts of our transport system.  Here, we focus on mobility-as-a-service (MaaS) and connected and autonomous vehicle (CAV) technology.  These key elements in this new paradigm offer the potential to radically improve road safety and free up non-value-added time spent driving and sitting in traffic.

What Is Mobility as a Service?

The next presentation, by Pete Costello, SVP at Iteris, a global leader in smart mobility infrastructure management, discussed the broad need for transportation, stressing its centrality to the global economy and our ever-rising standard of living. He then introduced the MaaS concept, as well as its genesis under Sampo Hietanen, industry founder and current CEO of MaaS Global (readers can hear our subsequent interview with Mr. Hietanen on the Smart Cities Podcast).

Mr. Costello explained that the mission of MaaS is to reduce the prevalence of single-occupancy vehicles to help lower pollution, increase vehicle utilization rates, and improve the human experience through “multimodal and sustainable mobility services addressing customers’ transportation needs by integrating planning and payment on a one-stop-shop principle.”

The idea is for a customer to be able to conveniently and flexibly access whatever transportation mode, or combination of modes, is needed to get to where he or she needs to go.

A customer would be presented with multiple journey options, along with their respective expected journey times, environmental footprint, calories burned, and so on.

They could pay per journey, or via a subscription. According to Mr. Costello, the subscription model emerged from an observation that for private vehicle owners in Western countries the “true cost of mobility is approximately $700-$800 per month” when vehicle maintenance, fuel, insurance, deductibles, parking, citations, inspections, government registration, taxes, and other costs are considered.  This does not include time spent at the service station, government offices, and the occasional towing yard.

Given this, a MaaS subscription providing full access to transport at a monthly cost below the private car’s true cost of mobility could prove attractive. Mobility packages with various price points and access levels may also have a role, as different customers will have different mobility needs. MaaS Global introduced its Whim app in Helsinki in 2017 and has found early success. The different plans available to Whim users in Helsinki are shown below. 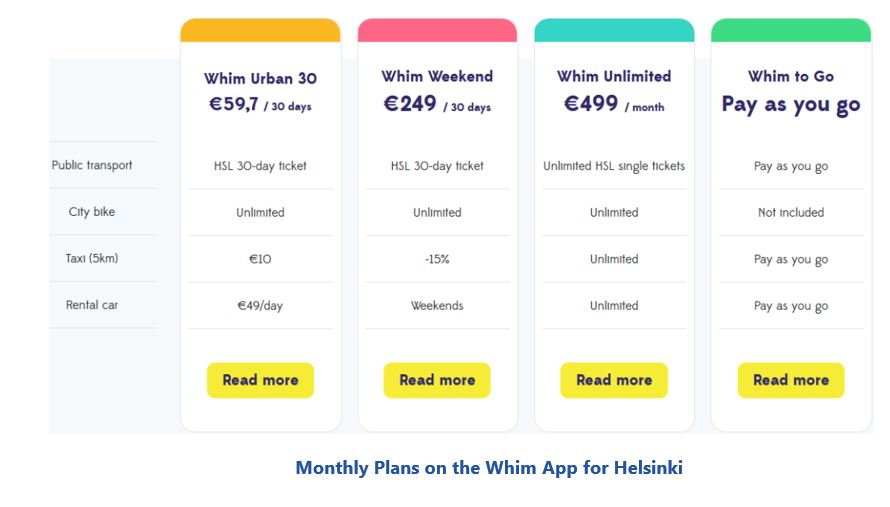 Providing access to any combination of modes through a single app requires integration with providers of different modes (ride-hail, transit, car rental, etc.) each with their own business and data processes, into a unified mobility operation, which then interacts with the customer. As Mr. Costello explained, “This is where we want to be, but it’s hard to get there. All the different entities involved are siloed, and not just in their services but their data - the accuracy of that data, its frequency, some of it real time, some of it static. How do you put that all together?”

Beyond the technical challenges, drivers are usually not aware of their true cost of mobility. This is because most costs associated with car ownership are payed relatively infrequently, while the cost of a ride-share or e-scooter is presented with every ride.

Another challenge lies in “car pride,” a concept introduced by MIT researchers studying mobility systems worldwide. According to the researchers, “The car fulfills not only instrumental transportation functions, but also holds important symbolic and affective meaning for its owners and users. In particular, owning and using a car can be a symbol of an individual’s social status or personal image.”

Lastly, since a mobility service consists of a menu of transport modes, the entire service suffers when one of these is lacking.  This means adequate public infrastructure, effective transit, and safe bike lanes are needed to make MaaS work well.

Our next presenter, Clayton Tino, CTO of Florida autonomous shuttle service operator Beep, argued that the future of mobility is not only shared, but also electric and, increasingly, driver-free.

With the potential to reduce accidents and lower mobility costs, vehicle autonomy is an exciting element of the CASE transition. That said, introducing robot cars to the general public is untested ground. Beep’s fleet of shuttles is entirely autonomous (and electric). Having provided over 14,000 rides in a matter of months, the company has gained valuable experience in the human side of autonomy.

Having a person on board the shuttle is currently a legal requirement where Beep operates.  According to Mr. Tino, the company found the practice is also quite useful to make the passengers feel comfortable and explain all the quirks of an autonomous vehicle (AV).  He likened this to a high-tech version of early elevator operators.

Mr. Tino went on to say that the “human factors involved are huge. It’s not just the vehicle control system itself but it’s how you plan, how you account for how other vehicles and other road users interact with your service.”

The first passengers were early adopters excited about the technology, followed later by the broader community. Beep has received mostly positive feedback according to Mr. Tino, though not without bumps: “We’re starting to see more of those people becoming comfortable with the idea of autonomy. Where we’re still trying to make inroads is the other drivers in the community.  People aren’t used to interacting with AVs on the roadway…we have displays on the vehicle to tell other drivers exactly what the vehicle is doing: slowing down, stopping, turning left.”

He went on to describe continuing challenges for AV operators in adeptly interacting with disabled, elderly, and hearing or visually impaired riders, especially when the human operator is no longer present in the future.

Mr. Tino cited some other challenges for AVs.  These include the still-developing sophistication of self-driving software and high vehicle costs, which are mostly driven by the price of the sensor suite. Beyond technology, he noted that the lack of standardized safety validation process from the federal government results in the company having to comply with piecemeal regulation that varies from one jurisdiction to the next.

In the panel discussion that followed, one panelist mentioned that someday autonomous operation will be just boring. Mr. Tino responded, “If one day it’s boring that means we’ve done something very right because things are going really well.”

Our next presenter was Professor Harish Chintakunta from the Advanced Mobility Institute at Florida Polytechnic Institute. His group tests autonomous systems.  In his talk, he argued that autonomous vehicles are necessary to reduce motor accidents, but this transition must be implemented properly. Dr. Chintakunta notes that we tolerate significant human error on roads but will accept a far lower accident rate from AVs and public opinion can easily turn away from them.

Autonomous vehicles rely on sensors, including cameras, radar, and lidar, to see their environment. According to Dr. Chintakunta, this is where the long list of unknowns begins for mass AV adoption. “In the future let’s say if all vehicles have lidar, there’s a heavy concentration of lasers in that area, so we don’t know what the result will be.  If a single test vehicle is working properly, it may happen that multiple vehicles may not work properly.”

Sensor data is collected and then processed by the vehicle’s algorithms.  These must make sometimes-critical choices, introducing difficult questions that extend beyond the realm of engineering. “When you’re talking about algorithms, you also want to test whether they take into consideration ethical issues…so there’s all sorts of ethical issues when it comes to autonomous systems, for example do you want your vehicle to save passengers or pedestrians? If you have a chance to save three people by swerving and hitting another person, do you want to do that?”

Other ethical questions arise as well. When autonomous taxis compete as mobility services aiming to maximize passenger time, will they be programmed to travel quickly (and with higher risk) when empty to pick up the next fare sooner?

According to Dr. Chintakunta, “We don’t want to be making decisions on what’s ethical as testers, we leave that to regulators and system designers, but we want to provide a mechanism for them to encode these aspects into the testing process.”

Lastly, Dr. Chintakunta introduced the element of human-AV communication and how machines will interact with the language of driving that we all use without thinking much about it. “There may be situations when your turn signal isn’t working, and you may put your hand out the window. Can an autonomous vehicle understand that? We have all these implicitly understood notions, so we have to start formalizing them and build a language and evaluate how systems are dealing with this.”