The prospect of a standard, real-time industrial Ethernet that overcomes the drawbacks of numerous non-interoperable industrial Ethernet implementations reached a significant milestone this month.  On June 19th, the IEEE (Institute of Electrical and Electronics Engineers) published the 802.1AS-2020 standard for Timing & Synchronization of TSN networks.  TSN and the associated joint IEC/IEEE 60802 TSN Profile for Industrial Automation offer the prospect for delivering standard, unmodified real-time industrial Ethernet (IE) that meets the requirements for industrial automation while overcoming legacy drawbacks in areas such as latency, fault tolerance, scalability, and determinism.

Fulfilling the Need for a Standard Real-Time Ethernet

This important component of the Ethernet TSN standard was deemed necessary since current IEEE 802 technologies for time-sensitive applications, such as high-quality audio/video streaming or industrial control, do not assure that the applications can present data with acceptable jitter, wander, and time deviation.  Prior solutions, such as IEEE 1588-2002, operate at layer 3 and can represent significant cost and complexity.

The new IEEE 802.1AS-2020 standard is designed to operate at layers 1 and 2, making it easier for networked devices to meet these requirements across a variety of time-sensitive 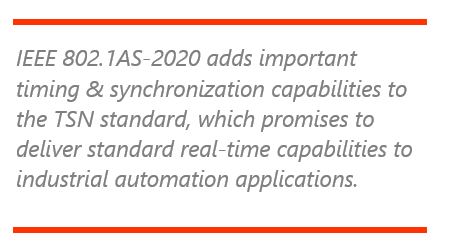 The standard encompasses maintenance of synchronized time during normal operation as well as addition, removal, or failure of network components and/or reconfiguration.  The published standard also now specifies the synchronization of managed objects as part of hot standby as well as protocols and procedures to ensure timing requirements are met in audio, video, control, and other time-sensitive network activities.

Time synchronization profiles are just one of the components needed at each network element where time-sensitive application data is mapped/demapped or a time-sensitive function is performed.  This is reflected in the numerous other standards that make up the overall TSN standard.  For example, the new standard specifies use of the existing IEEE 1588 Precision Time Protocol (PTP) standard where applicable in context of the already-ratified IEEE 802.1Q (VLANs).

Availability of standard industrial network technology managed as part of the overall IEEE 802.1 Ethernet development work promises numerous advantages to industrial customers.  These include standard, less expensive, and more widely available silicon, multi-vendor support, lower costs, and eliminating the need for vendor or network-specific real-time implementations.  Scheduling and other components of TSN can still be complex to implement, however, and require use of managed switches.

TSN’s focus on layers 1 and 2 does not address continued use of competing industrial application layers in Ethernet-based automation architectures.  Industry efforts are under way to address application layer interoperability, but these activities are taking place outside of IEEE.  Examples include the interoperability efforts of the AVNU Alliance and the TSN Testbed activity within the Industrial Internet Consortium, as well as the push to make OPC UA over TSN the universal means for communicating between industrial controllers and the cloud.