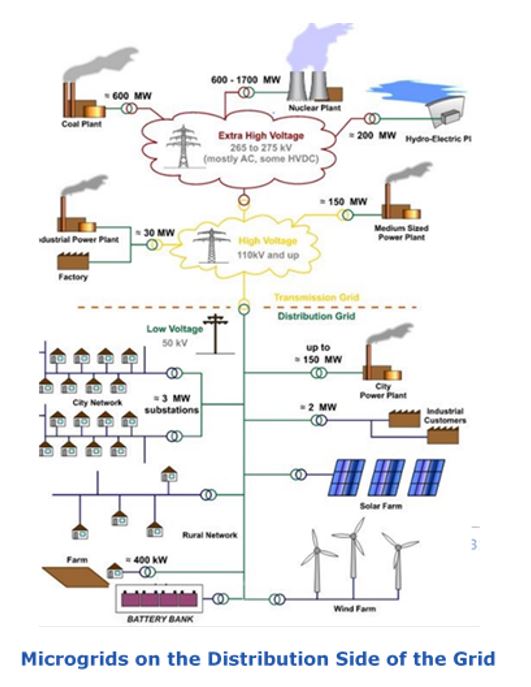 grid regulations, and grid scale batteries are driving demand for microgrids and how improved standards are enabling an interactive and transactive electric grid.

The ARC microgrid automation supplier market analysis is showing strong microgrid growth across the size spectrum from Nano-grids for residential and small commercial applications through the Microgrid size range up to Mini-grids with capacities above 100MW. The ARC Microgrid Automation Suppliers market study excludes grids below 20kw (Nanogrids) and excludes grids above 100MW (Mini-grids or main grids) and focuses on the automation of both generation and load management.

The growth in Nano, Micro, and Mini grids is driven be increased distributed generation and lower cost of energy storage systems. Market rules impact the business case for microgrids by allowing microgrids to provide valuable grid services. Microgrids can provide services, like frequency regulation, load ride-through, load shifting, and demand response load management. These services can improve grid stability and reliability, and in many cases, can reduce the need for expensive new generation, transmission, and distribution assets, thus reducing the cost of power.

Grid scale batteries and solar generation can be combined with diesel, gas, and propane generators to reduce the microgrid operating cost, and with new interactive grid controls, microgrids can provide many valuable grid services.

Reliability of electricity supply has never been more important than it is today. Once a society has electric power, people and business become dependent on it, and the cost of outages increases. Without power, we lose bank machines, restaurants, shopping centers, gas stations, EV chargers, cell towers, hospitals, police and fire, and internet access bringing business to a standstill. We’ve long had backup diesel generators and computer UPS systems for critical assets, but today, keeping reliable power to all residents and businesses is critically important and NERC (North American Electric Reliability Corporation) and other international regulatory bodies have been requiring utilities to make investments that increase power reliability.

In the US, electricity is regulated by the states, and there is a wide variation in regulations for the emerging electric power markets.  The vertically integrated utility of the past is being replaced by competition and consumer choice, and utilities alone will not own and operate microgrids.  It is apparent to virtually all state regulators, the utility industry is having to change its business model as many distributed energy generators are owned by private investors, and these investors believe they should be allowed to compete with centralized utilities. This regulation issue is not restricted to the US, and it is a challenge to create a new regulatory framework for this new energy world that keeps the cost of reliable power low, offers consumers more choices for power purchases, has private ownership of assets, and rewards investors and consumers when they are able to provide grid services. The general trend is that utilities are getting out of the business of selling electricity, and into the business of selling and brokering grid services. In a hypothetical deregulated utility, all consumers or generators can buy or sell power, and bid into the markets for wholesale energy and grid services. Regulators, utilities, and policy makers have significant technical and political challenges to make workable markets happen with significant variations within US states and utilities throughout the world.

Solar generation is especially likely to be built by private investment and deployed close to the loads it can serve.  The addition of battery storage and load management controls to solar PV generation enables the resulting microgrid to theoretically compete in many categories of grid services. One of the key questions is how all the generation, battery and thermal storage, and a range of discretionary loads can communicate and interact smoothly.

Coordinating various electric meters, safety systems, power inverters, battery chargers, and load control centers within a microgrid and then connecting that microgrid to a utility goes much smoother when all the devices are built with the latest communications and interoperability standards.

Standards activity has made a lot of progress over the past 5 years. The control of devices within a microgrid with an external grid requires highly reliable and fast responding communications interfaces. The standard IEC 61850 series of standards can provide the object models for exchanging. Information mapped to MMS (Manufacturing Message Specification), web services, DNP3, Smart Energy Profile (SEP), ModBus, and others. IEC 61850 has gained traction for substation and microgrid related equipment.

OpenADR, or Open Automated Demand Response, was an effort started by Lawrence Berkeley National Laboratory (LBNL) that has gained industry support. Demand response has become a more important function of microgrids. OpenADR version 2.0, with its expanded and complete set of DR and DER signals, will be submitted to the International Electrotechnical Commission (IEC) in Geneva, Switzerland for adoption worldwide.

The standards IEEE 1547 and IEEE 2030.5 are defining how to connect a smart grid to smart IoT devices and smart homes. These two standards are described below. 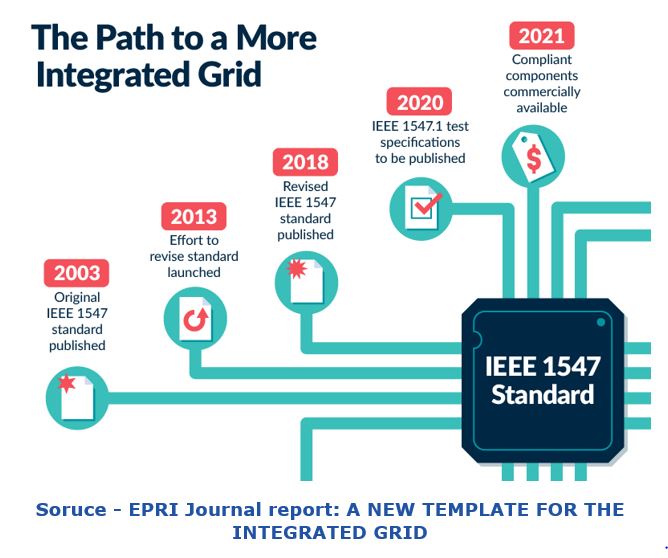 The smartness of grid related devices is improved when they know how to talk in the same language. EPRI (The Electric Power Research Institute) played an instrumental role in the collaborative effort to craft the latest version of the IEEE 1547 standard, which outlines technical specifications for the interconnection and interoperability between distributed energy resources and the electric power grid. These groups focused on voltage control, ride-through, and communication interfaces and protocols. As part of a two-year project, EPRI is working collaboratively with more than 20 utilities on applying the standard.

Smart Energy Profile 2.0 (SEP2 or IEEE 2030.5) is a very rich, modern IoT protocol. It has over 30 distinct “function sets” covering everything from device discovery to security to smart grid functions, like DER, demand response, and flow reservation for EVs. Your EV charging system, electric water heater, and HVAC controls are much easier to connect to a microgrid if they meet the IEEE 2030.5 standard.   The SunSpec Alliance took on the task of creating and managing a certification program for the application of IEEE 2030.5 to DER management. IEEE 2030.5 was created by utilities as a standard to manage energy in the customer premise, either directly or indirectly through a customer energy management system. It was conceived to address the shortcomings of ZigBee Pro Smart Energy 1.x with respect to ease of use, extensibility and security.

Microgrids are driven by distributed energy resources, battery storage, and new grid regulations. While regulations still have a long way to go, improving standards for nano and micro grids are simplifying the ability to perform a wider range of useful grid services in a manner that enables the vision of an Interactive Electric Grid that realizes the full value of both central and distributed energy resources. More information on the microgrid market can be found in the ARC Microgrid Automation Supplier market study.