Forward Direction for Microgrids Is Needed!

A forward direction for microgrids is needed!. Electric power drives the modern world, yet our systems for generating and distributing this electric power are far from perfect.  Our modern society requires reliable electric power for light, heat, transportation, communications, and a rapidly growing collection of electric appliances and devices.

While there are still some rural populations without power, once they get their first “taste” of electric devices (radios, TVs, cell phones, refrigerators, etc.), it’s likely that the demand for reliable electric power will soon follow.  Rural populations have always been the last to be connected to a grid and rural electrification, and historically, have resorted to an isolated grid powered by diesel generators.

Diesel power generation is expensive and not environment friendly.  But integrating local solar and wind generation and battery storage to form a microgrid can drastically reduce diesel fuel consumption and running hours. When wind and solar farms are connected to main grids, the addition of battery storage forms a microgrid that can shift loads to avoid power curtailment, and provide grid services.

Electric grids are increasingly deregulated, but deregulation has a long way to go before small players can compete effectively in the wholesale markets that favor large generators or consumers. The economics of microgrids can be quite complex because they need to work within the market rules and the constraints of the physical electrical system.  ARC Advisory Group sees a trend to aggregate many smaller microgrids into an entity that is large enough to compete in electric markets.  But organizing and controlling many small electrical systems is a formidable challenge.

While many architectural options are available for integrating microgrids into main grids, the architecture must be consistent with the market rules and support grid stability.

In 1882, Edison Electric built the very first electric grid in the US for 85 customers to power 400 lamps in Manhattan.  By today’s standards this was a microgrid. This DC-powered network soon faced competition from Westinghouse’s high-voltage AC generation and transmission approach, which could move power over greater distances to more customers.  It was a basic concept at the time that central station generation was the only practical way to make electric power and distribute it to population centers.  Initially, coal-fired steam engines and hydroelectric power were used to generate the power centrally.  Subsequently, other fossil fuels, nuclear fission, and additional hydro sites were added to the generation mix.

The introduction of spinning turbines to generate electricity advanced the state of the art.  Where a small grid can simply regulate voltage, large grids powered by spinning turbines could utilize an automatic generation control (AGC) system to synchronize generation to the grid frequency, with voltage control as a secondary goal.  Grid operation and control has increased in complexity and the grids require constant monitoring and control to balance generation and demand.

In the US, regional control centers called ISOs (Independent System Operators) and RTOs (Regional Transmission Operators) constantly monitor the grid frequency, current, voltage, power, and power quality and dispatch and regulate generators, transmission lines, and large industrial loads. The goal of this system is to encourage fair competition to produce power reliably at the lowest cost.

A major advance in electricity pricing theory occurred in 1988 when four professors at MIT and Boston University (Fred C. Schweppe, Michael C. Caravans, Richard D. Tabors, and Roger E. Bohn) published a book titled, "Spot Pricing of Electricity." It presented the concept that prices at each location on a transmission system should reflect the marginal cost of serving one additional unit of demand at that location. It then proposed a control system solution to determine these prices by using linear programming (LP) optimization algorithms to solve a systemwide cost minimization problem while complying with all the system's operational constraints (generator capacity limits, locational loads, line current limits, etc.). The locational marginal prices (LMP) then emerged as the LP solution by computing the shadow prices for relaxing the load limit at each location.

In the US, these grid control ideas led to the Energy Policy Act of 1992. To transition from vertically integrated business monopolies and in-crease competition via pricing mechanisms, utilities have seen a continuing stream of deregulation worldwide.  In the US, FERC issued the landmark Order 888 in 1996, which was intended to deregulate the vertical electric power market and separate generation from transmission.

Various market-based reforms are still on-going. Some implementations have had partial success but the TE (Transactional Energy) market is far from a solved problem with plenty of technical implementation problems and no shortage of political influences.

The Tale of Two Visions

Electric reliability and resilience are becoming increasingly important. Existing coal and nuclear plants in North America, Europe, and else-where are in decline.  China currently has no new nuclear plants planned and is working aggressively to reduce its dependence on coal.  Solar, wind, and natural gas dominate new power generation world-wide. Solar is overtaking wind for new generation in many parts of the world with many residential homeowners and small business owners installing solar for small-scale distributed generation.

There are many ways to structure the grid architecture, but let’s look at two contrasting visions. One is called Grand Central Optimization where the ISO/RTO, which we’ll refer to here as the TSO (Transmission System Operator) interacts directly with all grid players.  A second option is the Layered Decentralized Optimization DSO.  Both are described in more detail in an IEEE report by Lorenzo Kristov, Paul De Martini, and Jeffrey D. Taft called A Tale of Two Visions: Designing a Decentralized Transactive Electric System.  David Roberts also produced a more recent summary of the problem and possible solutions.

The Grand Central Optimization vision is the logical extension of the current wholesale market in TSO areas today, but with many more and diverse DERs participating in the wholesale markets. This includes DERs on both the customer and utility sides of the meter. You could imagine how complex it would be for a single homeowner or small business to enter into a business relationship with the wholesale markets and equally difficult for a TSO to deal with every single small customer.  Some level of aggregation appears to be required. 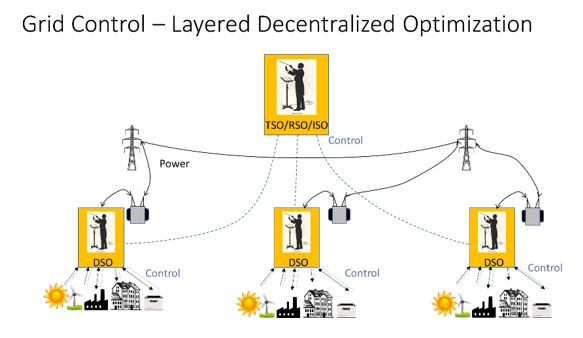 With the Layered Decentralized Optimization (DSO) vision, instead of numerous DERs (microgrids and nanogrids) bidding directly into the wholesale market and being scheduled and dispatched by the TSO (i.e., ISO/RSO), the DSO would aggregate all DERs within each local distribution area (LDA). This includes DERs aggregated into virtual resources by third-party aggregators. In this model, an LDA is defined as the distribution infrastructure and connected DERs and end-use customers below a transmission-distribution (T-D) interface substation or LMP pricing node. The total DSO would then provide a single bid to the wholesale market at the T-D interface.  This allows the LDA to buy or sell energy and offer capacity and ancillary services to the transmission grid. This is the distributed control option.

Moving worldwide electric grids from largely central generation to increasingly distributed generation is perhaps the most complex system integration problem of our time.  While a single worldwide grid is a futuristic vision, the general issues of connecting smaller grids down to the scale of micro and nanogrids is the kind of complex problem that our grid regulators, utilities, aggregators, politicians, and technical communities must solve to provide reliable electric power fairly and efficiently.

For example, both Puerto Rico and California are using microgrids to help support reliable power, renewable generation, and new business and control system relationships with utilities and grid operators.  In Puerto Rico, the urgent need for local power following the devastating Hurricane Maria was a key driver for microgrids. This complicates the financial recovery of PREPA because microgrid solar power will reduce its power sales revenue.  In California, incentives to drive renewable generation and reduce carbon dioxide emissions have resulted in so much new solar power during daylight hours that grid management has to ramp up conventional generation as the sun goes down.

A modern microgrid is a group of electricity sources and loads that normally operates connected to the main electric grid (macrogrid).  But a microgrid can also disconnect and function autonomously in “island mode.” A microgrid can integrate renewable and other distributed energy resources and supply emergency or independent power, changing between island and connected modes. It would be easy to add battery storage to renewable energy sources (RES) to configure a microgrid.  Diesel or gas generators could certainly be a part of a microgrid to add backup or extra capacity.

A simple diesel or gas-powered generator, an “old-school” form of local power grid, is normally used for backup power with little need to connect to a larger grid.  Unlike solar power, the cost of diesel power is too high to justify sustained export, so switching is often arranged for grid-disconnected backup without the possibility of pushing power into a larger grid. Microgrids with distributed energy generation like solar or wind are the lowest-cost generation and grid-scale batteries can help smoothly connect and disconnect from a main grid.

A typical control scheme is for a microgrid to use generated power to handle local loads first.  Then, once local loads are satisfied, the scheme stores power locally in batteries or perhaps thermally.  If excess power is still available, the remainder can be exported into the main grid. Failure of the main grid transitions to island mode with the chance that some loads are not met and excess power may need to be curtailed if it has no place to go.

Modern battery inverters, PV inverters, and wind turbine converters often have the capability to shape the AC waveform to improve power quality and regulate the power factor for efficient power transmission. The decisions of when to use, store, or export power can get complex, and remote microgrid operators can be an essential part of many microgrids.