In 2018, many North American shippers had difficulty securing adequate truckload (TL) capacity in that tight trucking market.  Several factors contributed to these difficulties.  These include an aging driver population combined with retirements, mandates that reduce the number of hours a driver could drive in a 24-hour period, and a robust economy - with increasing demand and low unemployment. Truckload is an important mode, accounting for approximately 30 percent of total shipments as measured by dollars.  It is also the transportation mode most affected by capacity issues.

The difficulty of securing transportation capacity in 2018 made it clear that benchmarks focused solely on freight costs or service are not good enough.  In times of tight capacity, shippers need to be able to secure loads reliably.  Attention has turned to measures associated with being a shipper of choice.

In a recent survey, ARC Advisory Group polled 53 transportation executives to gain insights into measures of truckload effectiveness in North America.  Forty-five percent of the respondents had vice president or director titles; the rest were managers or had other titles.

The truckload capacity crisis and truckload increases in rates lasted from late 2017 through the end of 2018. Beginning in early 2019, capacity issues began to ease. The importance shippers associated with being a shipper of choice began to lessen. When shippers need trucks, they talk about partnership, reasonable scheduling, treating drivers fairly, and providing consistent freight. However, when capacity is readily available, they change their tune and stress lower prices and more reliable service.

However, prudent risk management would suggest that it makes sense for shippers to remain a shipper of choice in good times and bad times.

Eighty-two percent of shippers surveyed benchmark their rates at the lane level. If a shipper is not 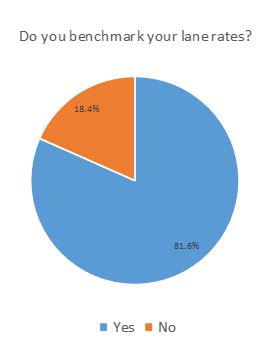 benchmarking its rates, it is almost certainly not getting a competitive rate.  Companies using transportation management system (TMS) solutions from BluJay Solutions or Transplace can benchmark their North American truckload rates against other shippers on an ongoing basis by lane. Chainalytics’ Freight Market Intelligence Consortium’s solution enables lane-level benchmarking in North America on a quarterly, semi-annual, or annual basis. DAT also offers lane-level, TL benchmarking, but based on spot market rates.

On lanes with high predictability and volume, companies tend to rely on carriers they have selected in strategic procurement engagements. For lanes that have less predictability and for ad hoc shipments, brokers become more important. When companies are forced to go to the spot market, instead of relying on the carriers in their route guide, they usually pay more.

Research also shows that shippers that engage in strategic procurement events more frequently get better rates and with higher first-tender acceptance rates. Engaging in these procurement events annually is a best practice.  Half of our respondents did engage in these events annually. If companies do not have annual events, they may seek to make use of freight indexes to help understand when the market is tightening or loosening. In our survey, 83 percent of respondents reported using freight indexes for this purpose.

There is debate about whether centralized procurement leads to better rates. Some professionals argue that a transportation management system allows companies to handle the complexity associated with working with many carriers. Thus, shippers should not look to artificially restrict the number of carriers they work with, particularly if small carriers perform well on certain lanes.

But in this survey, half of respondents have chosen to centralize their TL procurement. Many of these suppliers clearly believe working with fewer large carriers on a larger number of lanes is advantageous. Larger carriers can often provide superior real-time shipment visibility, consulting, and advanced analytics.

Technology can be used to reduce freight costs while improving service. An ARC survey on the ROI of transportation management systems found that respondents indicated freight savings of approximately 8 percent with the use of a TMS application.  ARC defines a TMS solution as one that can handle multiple modes and has optimization logic.  Providers of managed transportation solutions that also use TMS to optimize shipments can provide a similar level of freight savings. However, 22 percent of respondents do not use a TMS or work with a managed transportation provider.

If a shipper can provide a backload associated with its shipment, this often creates an opportunity to get discounts. For example, strong efficiencies are created if a company ships goods to a customer from its factory and then provides a carrier with destinations to pick up raw materials used in its manufacturing for a return trip.  But this is not easy to do. In this survey, 43 percent of companies reported never being able to provide backhaul opportunities.

In certain regions of the country there are many inbound loads and relatively few outbound loads. Florida, for example, is one such region. Rates on these lanes are (and should be) higher.

Some shippers appear to be confused about the overall desirability of their loads. Florida, for example, represents 6.4 percent of the US’s total population.  However, when we asked companies “What percentage of your loads are destined for regions where the carrier will have difficulty getting a backhaul?” 35 percent reported that they had no shipments going into bad backhaul regions.

Shippers that actively manage their loads may also find opportunities for savings. For inbound shipments, customers may take responsibility for securing a carrier and paying for the loads. For outbound shipments, a customer may choose to go with factory gate pricing. With this pricing mechanism, the customer secures the transportation and the manufacturer does not charge them for the freight. In some cases, suppliers or customers may be able to secure better rates on the lanes. This is often not the case, however. Shippers should periodically explore when it is cost-beneficial for them to take responsibility.

When you ask companies what their on-time arrival rate is, most companies report they are doing well.

But when you ask shippers about on-time in-full to first requested data, only about half report that they hit that date over 90 percent of the time. Walmart measures its suppliers on this tougher service standard. Although in May, Walmart relaxed the strictest interpretation of these rules.

In procurement events, service can be improved if shippers ask carriers about the amount of capacity they can commit to serving that shipper on their lanes.  In this survey, 79 percent of shippers do ask carriers to provide these commitments.

Better communication between shippers and carriers can also improve service.  Providing carriers with advance notice about a surge in the amount to trucking capacity that will be needed can improve the chances they will be able to accept those additional tenders. Seventy-three percent of respondents reported that they did engage in this practice.

Giving carriers more lead time on tenders can also increase tender accept rates. If carriers only have a day or two to respond, carriers will often be more constrained in their ability to accept a load. Eleven percent of respondents report that they give carriers six days or longer before a load needs to be picked up. Fifty-seven percent report giving carriers only two days or less.

Becoming a Shipper of Choice

When capacity is tight, shippers want very much to be considered a shipper of choice.  One measure of a shipper’s popularity with carriers is its first-tender acceptance rates. If carriers have choices and a shipper has been difficult to work with, they will reject tenders more frequently from that shipper. In our survey, only 54 percent of respondents report truckload first-tender acceptance rates of over 90 percent.

We also asked shippers, “Have you developed a reputation among carriers as a tough negotiator, engaging in a long procurement process that has historically sought below market rates?” Fifty-three percent of shippers admitted this was the case. Despite the high number of respondents reporting that they are tough negotiators, almost 60 percent of shippers mentioned a six years or longer average tenure with their top carriers.