The transportation sector is the largest source of greenhouse gas (GHG) emissions in the United States, having surpassed power generation in 2015. Despite lower total energy consumption than power generation, transportation’s carbon intensity puts it ahead in terms of emissions. In addition to GHGs, combusting fossil fuels releases deleterious pollutants into the air which have been proven to impact respiratory, cardiovascular, and neurological systems, as well as causing various forms of cancer. Emissions from road transportation alone are thought to cause about 50,000 premature deaths per year in the United States.

A far greater share of transportation emissions is released in populated areas. According to the EPA, “An estimated 45 million people in the United States live, work or attend school within 300 feet of roadways with high concentrations of air pollution due to motor vehicle emissions.” This is a serious issue that needs addressing. 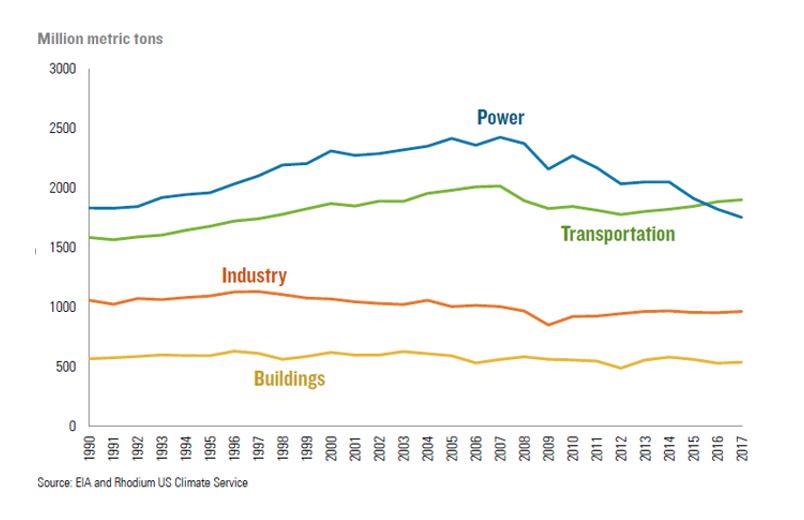 Recently, leaders of nine member-states of the Transportation & Climate Initiative (VT, MA, CT, RI, NJ, PA, DE, VA, MD) as well as the District of Columbia committed to create a regional transportation policy to drive down emissions and strengthen economies in the same stroke. Members intend to develop the policy within a year before each jurisdiction chooses whether to implement it or not.

The intention is to employ a market mechanism such as “cap-and-invest”. This device does two things: provides a mechanism to force emissions down and channels funding for transition to cleaner transport. Here is how it works:

The idea is that a small rise in fuel prices will act as an investment that pays for itself by improving air quality and health, reducing notorious road congestion, and jumpstarting local competitiveness in the transport technologies of the future. If implemented, the Northeast region would join California, Quebec, and Ontario in creating a cap & invest program for emissions from the transportation sector.

Though not the national level policy many in the US still hope for, 50 million people live in the nine states (and DC) which are developing this policy; they have a combined economic output of well over $3T. Though New York state was not party to the original agreement, it is a member of TCI and joined a similar regional effort in the power generation sector in the past, suggesting the state may yet join at a later date.

So, what will this policy mean for the region when ratified? On one end, new price signaling will steer demand toward cleaner transport options such as electric vehicles (EVs) and public transit systems. On the other, states will invest the new revenue in programs such as incentives for EVs and EV charging equipment, installation of intelligent transport systems, and upgrades to public transit. This will help accelerate the much-needed transformation of the Northeast’s transport ecosystem.