Open source. Open standards. Interoperability. Cloud computing. Edge computing. What do all of these terms mean in the current context of the IoT, cloud platforms, and the intelligent edge, and how are they interrelated? Moreover, what are the relevant organizations and standards bodies doing to promote and support openness and interoperability? Are open source, open standards, and the cloud mutually beneficial?  In this ARC Advisory Service report, we’ll look at all these terms and concepts and examine how they fit within the context of the digital transformation taking place across industry and business.

It is becoming increasingly clear that for companies to make the full digital transformation, and to conduct their manufacturing and business operations across the Industrial IoT, cloud computing, and the operational intelligent edge, they must rely on a more “open” environment.  This includes open source software, open standards, and interoperability;  all with unique characteristics and distinct differences.

The digital transformation and the technologies, products and services, and business strategies that define it are forming into clear and distinct delineations.  From the cloud enterprise infrastructure of platforms, servers and networking; to the edge computing environment of private cloud servers, networked appliances, gateways, and firewalls and the far edge of IoT endpoints, intelligent devices, and automation and controls; the overall architecture and individual components are being defined.

To operate successfully in this landscape, industrial and other organizations will require an understanding of open source software, its benefits and limitations; and an equally clear understanding of open standards and the organizations, foundations, and consortia that define and pro-mote these standards.  How much of all of this will provide real interoperability remains to be seen.

Open source software and the development community that it spawned and the open standards movement that evolved along with the soft-ware aren’t the same.  Open standards often are a requirement for doing business; open source, in turn, is a choice made by users.

Everything from the common lightbulbs we screw into the common sockets made by companies worldwide to the common connectors used for electrical and electronic devices and more sophisticated network components are all based on a series of open standards defined by a standards body and conformed to and adopted by those products’ manufacturers.   Additionally, we have seen the emergence of industrial standards that focus on certain industries and common products and supply chains such as the automotive or electronics industries that have defined tire sizes and the layout of printed circuit boards, respectively.  There are also de facto standards that come about primarily by a very large market presence that literally defines the market space. Microsoft Windows would be an example of this.

In the software world, open source code products, such as Linux and the Android operating systems or the Mozilla web browser use open standards heavily; but so do closed proprietary products such as Microsoft Windows. The commonality of open standards is what most products need to be to be accepted in the marketplace.   What distinguishes open source software products is that they come with their source code and, generally, with a license that enables others to modify the source code to develop specialized software applications.

As a complex and dynamic ecosystem, our current technology environment could not function without open standards.  Because standards define the file formats and behavior of software, any developer can write software applications for Windows or Linux or the Mac, so the barriers to entry are low. In general, platform designers that have attempted to keep their interfaces proprietary fail to do well in the technology marketplace.  There have been some highly proprietary systems over the years that were notable exceptions: the Microsoft Windows operating system and some of the communications protocols developed by automation companies are examples.

Open Source and Open Standards Do Not Ensure Interoperability

Interoperability in the context of computer and software implies the ability of the computer system or software to exchange and make use of information. Interoperability can also mean different things to different industries, applications, and users, such as common/standard protocols for controls systems, or CAD models that can be used across different CAD authoring tools.   Basically, interoperability means one users’ system will work with another users’ system at all levels.  Of course, the “devil is in the details” in making the systems work together at all levels.

Open source, on the other hand, is having a code base that is available and open to the user (developer) to access and make changes that are generally beneficial.  But just because you can go in and make improvements to the application code doesn’t necessarily mean the application will interconnect with other systems or applications. Open source can imply interoperability, if the definition is limited to mean “connect with previously written code in the same executable image,” but this generally is not the practical intent of interoperability.

But this limited definition of interoperability is not the one that companies and industries are dealing with today.  Within the context of implementing  the digital twin they want to be able to connect system A and system B seamlessly in business process flows or production systems that make sense in an ever-expanding system-of-systems.  This enables digital transformation.

Protocols are needed to enable true interoperability across business and manufacturing ecosystems.  While it’s nice to have standard protocols such as TLS, HTTP, Web Services, XML, and others in common communications stacks; standardized protocols are not a requirement for interoperability.  The requirement is published protocols, not necessarily standard ones.  Published network and system protocols allow interoperability. As the landscape for the Industrial IoT and edge computing emerges with the array of open source and open standards proliferating across factories, production systems, supply chains, and businesses; the organizations and open source  foundations will share and publish the protocols that will connect this landscape.

The Open Source Landscape for Cloud Computing and the Intelligent Edge

At this stage of the digital transformation, including the adoption and implementation of the Industrial IoT and Industry 4.0, the question is: is open source good for the Cloud?, and conversely, is the Cloud good for open source? At first glance, the answer would appear to be “yes” for both sides, but  some qualifiers must be considered.  Regardless of the balance, both cloud computing and open source have experienced unparalleled growth across most industries and businesses. 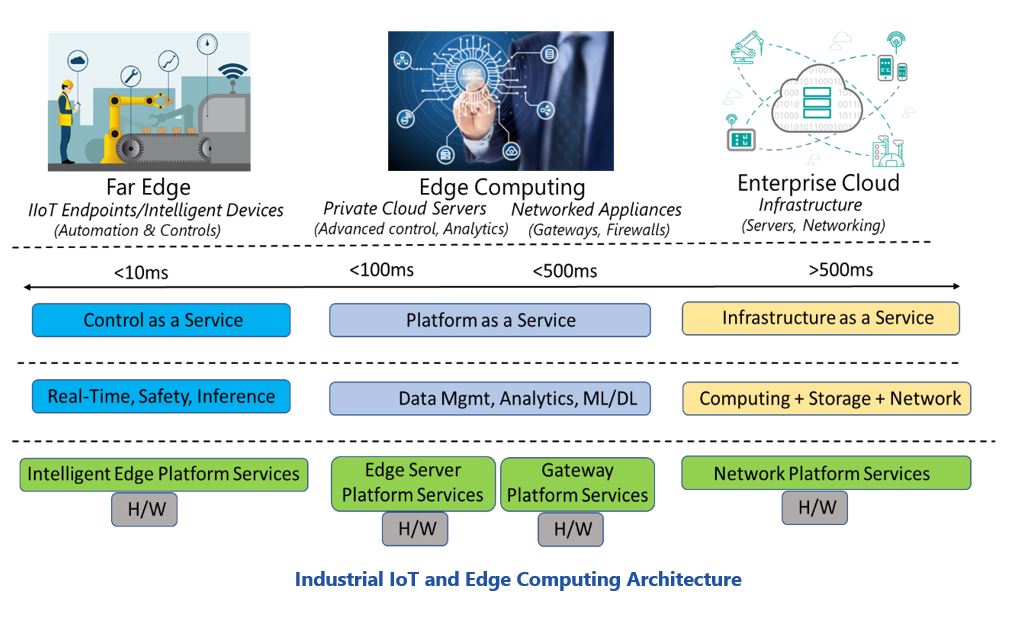