Tales from the Industry of Things

The increasing number of IoT related events on the calendar should not have escaped notice. Here in Singapore, for instance, we have gone from having none in 2013, one in 2014, and for this year, well, I need two hands to count the number of IoT conferences on the 2017 calendar. Still, at least for now, the events are seeing decent delegate attendance and respectable sponsorship support, which must mean continuing interest to hear about the constituent technologies, on how they all fit together, learn from the project experiences of end users; and for sponsors, an evident and ongoing need to position themselves as players in the (now not so) brave new world of the Internet of Things.

For Emerson Automation Solutions, as one of the few automation/controls supplier at the show, it was perhaps appropriate that chief technology officer Peter Zornio used control systems terminology to explain the Industrial IoT opportunity for plants: IIoT technology allows you to extend closed-loop control beyond the core process to aspects such as energy, reliability and safety, which still rely heavily on manual – and hence open loop – procedures. The loop is closed by expanding deployment of sensors to previously unmonitored or manually monitored areas and, facilitated by analytics software acting on real-time data, using the information to make high quality decisions. 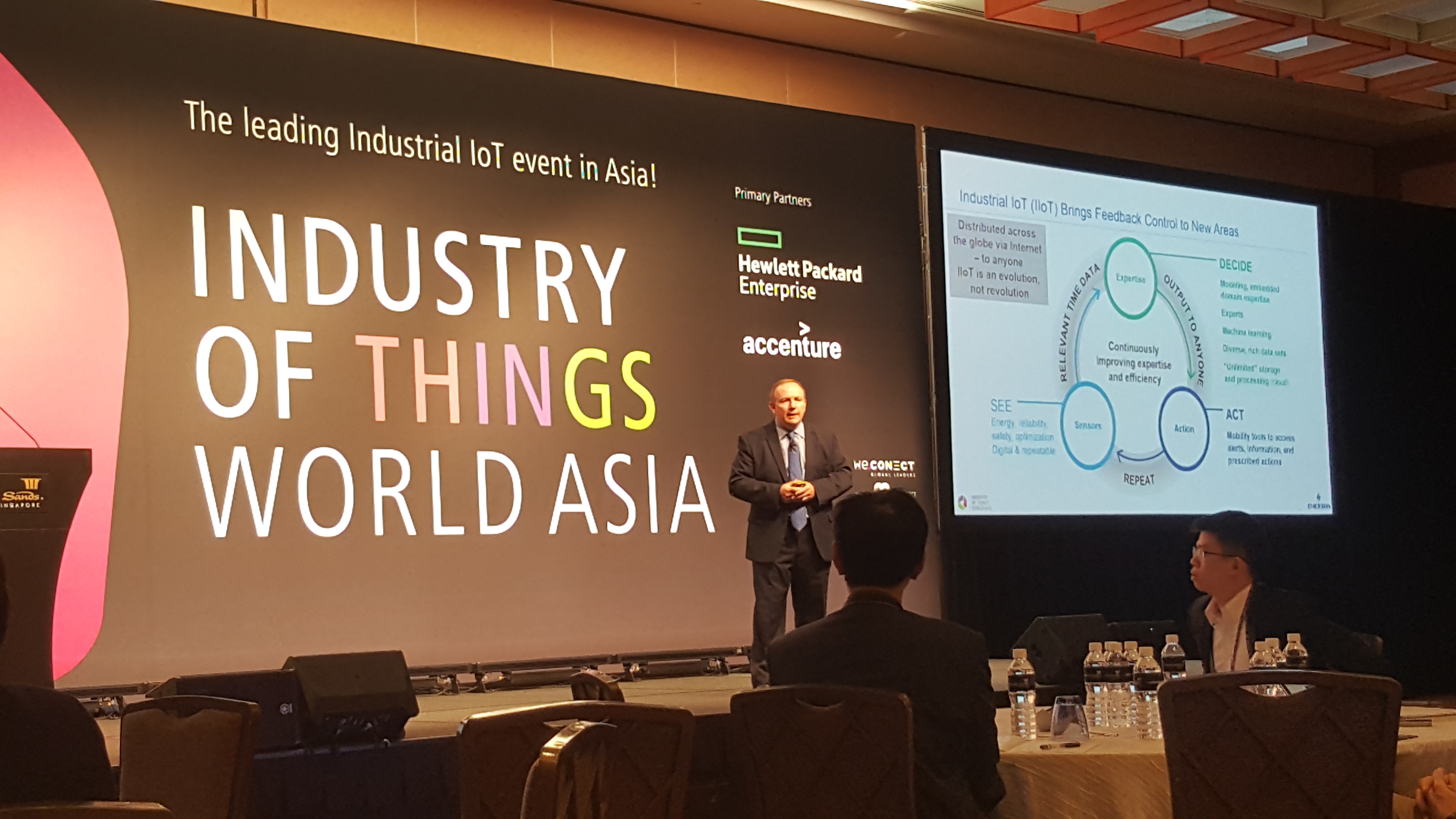 Building on its Pervasive Sensing portfolio of field instruments designed to be easy and cost-effective to install and widely available as wireless options to simplify integration, Emerson’s Industrial IoT offering comes in the form of the PlantWeb Digital Ecosystem. Key features detailed by Zornio include a secure first mile architecture, PlantWeb Insight and PlantWeb Advisor analytics tools, and Connected Services, whereby plant data is sent securely to Emerson facilities for expert analysis. The Denka Chemical plant in Singapore featured on this blog last year is an early example of Connected Services in action.

Still, it’s not necessarily a case of build it and they will come. As the Emerson CTO pointed out, only one in 20 companies has an in-depth Industrial IoT strategy for improving plant equipment reliability and maintenance, and (as ARC also finds in our surveys) unclear ROI continues to be a barrier to more widespread adoption of the technology.

While OPC-UA has been around for almost a decade, it is clearly getting a new lease of life from the IoT boom. And hence a first appearance at an IoT show in Singapore for the OPC Foundation and global vice president Stefan Hoppe, who wants to get the message across that OPC-UA is much more than another communications protocol. Rather, as a secure, platform independent service-oriented architecture, it provides interoperability – not just connectivity – between different automation devices and systems, right through from sensor to enterprise. In the Industrial IoT development world, OPC-UA is adopted by the Industrial Internet Consortium for three of its testbeds, and in Germany, it is recommended as the communication layer in the Reference Architecture Model Industrie 4.0 (RAMI4.0). OPC-UA is also seeing increasing support in the form of integration in products from the likes of Rockwell Automation, SAP, Siemens, Emerson, HPE, Mitsubishi Electric, and Microsoft.

Aside from Emerson, another one of those OPC-UA proponent companies mentioned by Stefan Hoppe, HPE (Hewlett Packard Enterprise), presented at the conference (“Age of Digitization – Internet of Things is a Call for Action”) and also had one of the larger and more active booths on the exhibition floor, with the crowd attracted by an Industrial IoT rotating machinery demonstration featuring technology from National Instruments (CompactRIO controller) and PTC (Predictive Service cloud analytics platform) in addition to HPE’s own Edgeline IoT edge gateway. The demo system showed not how early warning of machinery failure can be enabled through real-time monitoring and analysis of machine condition but also how technology from different suppliers comes together to create an IIoT system. 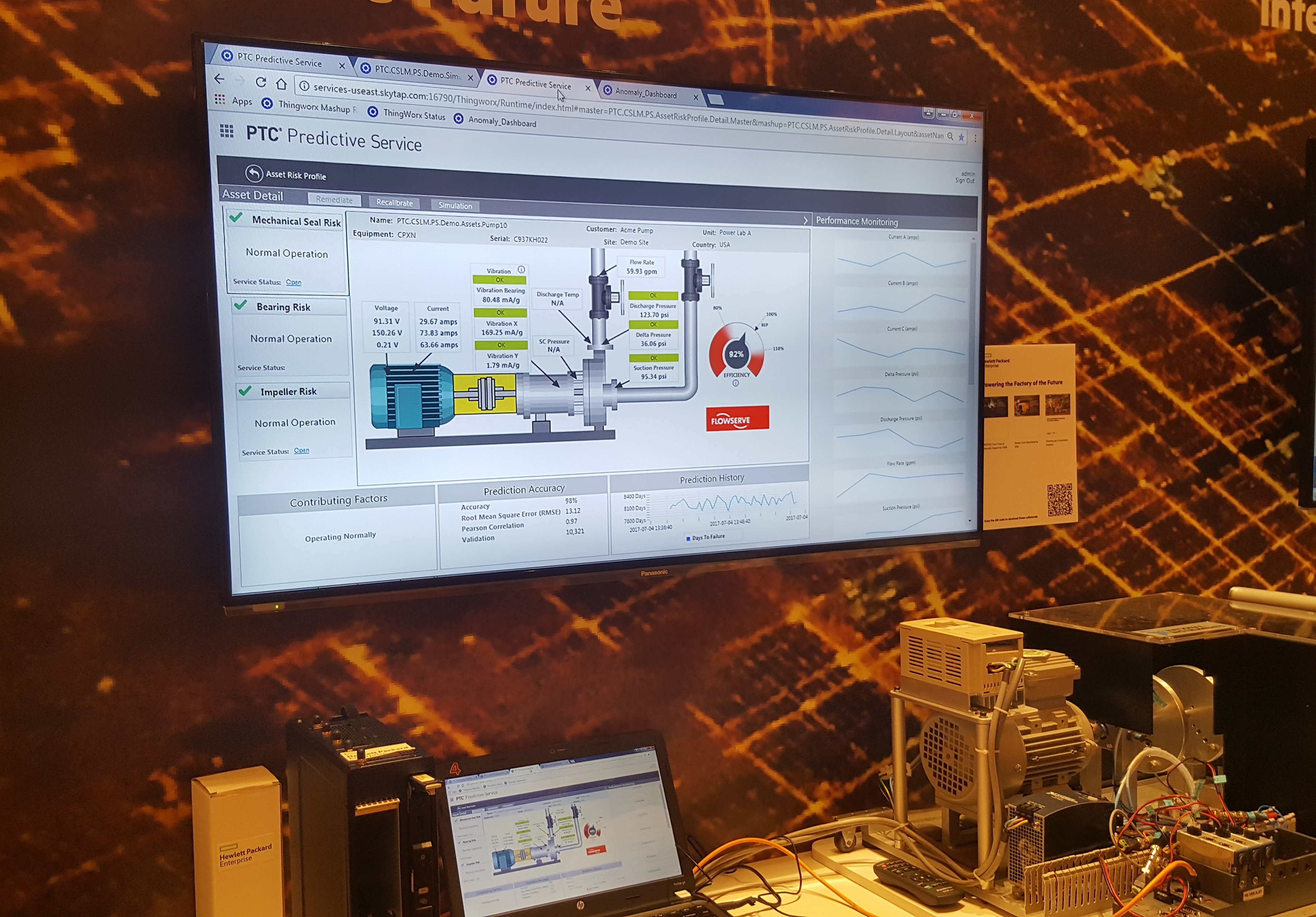 So much for suppliers, which also included Belden, Cisco, Google, Mitsubishi Electric, among others, but how about those end user experiences that delegates hanker after? Well, a more than adequate turnout of manufacturers from a diverse range of sectors at Industry of Things World Asia telling the tales of their IIoT journeys and providing useful recommendations for soon-to-be fellow travellers.

Among them: Air Liquide (gases) – taking operational excellence to the next level through advanced automation, data analytics, and enhanced, technology-enabled collaboration; Continental (tires) – you should focus not so much on getting huge amounts of IoT (big) data but a mix of the five major types i.e. measurements, situational, transactions, diagnostics, context; New Balance (running shoes) – while data collection in the factory is now automated, we still need to automate the data analysis function so that (by 2020) we can react in real time to shop floor issues, and looking further ahead, we believe that only artificial intelligence can handle the myriad of complexity we face in the sporting goods industry. Other end user presenters included Airbus, Henkel, Rolls-Royce, and Shell.

With all the presentations, the exhibitions booths, the round tables, and of course the discussions I had over the two days, there is a lot more I can say about this first Industry of Things World Asia event, and indeed, will look to do so in future blog posts here. But suffice to say that for those with an concentrated interest in Industrial IoT, this Fitbit free zone, if I may, is a welcome addition to the events calendar.