In January, the Bluetooth Special Interest Group (Bluetooth SIG) announced a new direction finding feature as part of the much-anticipated version 5.1 of the Bluetooth Core Specification. The new feature formalizes the addition of direction capabilities to Bluetooth proximity solutions, with the goal of delivering improved accuracy for real-time location systems (RTLS). The expected result: growing adoption of new Internet of Things (IoT) applications and other use cases for the enterprise and consumer markets that rely on more precise location capabilities, in some instances down to 10 centimeters or lower.

The accuracy level required depends, of course, on each individual use case. For larger items being tracked, such as a container in a shipyard, understanding accuracy within a few meters is probably enough. In a sports environment such as a hockey rink, accuracy is required as close as within a few centimeters, as players and equipment are in constant motion and their relative position to each other is essential for characterizing the game dynamics, and for isolating specific events using real-time tracking and data analytics.

Pinpointing location in real time is complex for many reasons. A building’s infrastructure, such as concrete walls and floors and steel support beams often interferes with or blocks wireless signals, which makes determining location with any consistent level of accuracy difficult. Two new methodologies within the direction finding feature are helping to mitigate these losses and overcome the complexity, improving location capabilities: Angle of Arrival (AoA) and Angle of Departure (AoD). These two location system architectures utilize angular direction estimation to determine positioning.

AoA and AoD are key to driving location services into new markets like smart buildings and sports, and improving the accuracy in existing ones, such as asset tracking in industrial IoT use cases. And while they sound alike, each is intended for different markets. One is already in commercial use today across a wide range of industries and use cases. The other will benefit from participation of the software operating system (OS) and hardware original design manufacturer (ODM) providers before reaching any sort of scale. Let’s take a deeper look at each.

With the network-centric AoA methodology, a tag or smartphone—or virtually anything with a Bluetooth transmitter—can be tracked by its position. Devices make their location available to the location service application by transmitting direction finding-enabled packets using a single antenna. A multi-antenna apparatus (aka Locator) receives the radio signal and calculates the angular estimation. Finally, the data is sent to a positioning engine, which computes the location information and delivers a precise location of the device (see Diagram 1).

Because the intelligence is built into the network rather than the device, AoA is a strong solution for most industrial and enterprise use cases that require consistently reliable location capabilities and needs to contain the price of the tags. One such application is asset tracking for industrial environments (for example, determining the precise location of a specific piece of equipment in a large warehouse saves the time and productivity loss associated with manually searching for it). AoA-based systems are already being used in dozens of industries and enterprise use cases, from asset tracking and safety applications in manufacturing, oil & gas and other industrial industries to productivity use cases in smart buildings and smart hospitals. 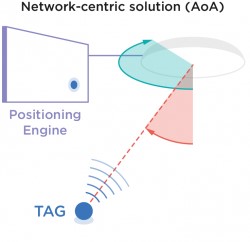 AoD is based on a mobile-centric architecture, where the intelligence is in individual devices, such as a smartphone. Each device has a single antenna that directly runs the positioning engine. The device receives the radio signal transmitted by the multi-antenna Locator.

Because the system “smarts” are built into the device rather than the network, all of the power consumption takes place on the device side, which works well since devices like smartphones can be plugged in and recharged frequently and easily. In this case, the  Locators could be  low-power and battery-operated devices (similar to tags in AoA systems) with long battery life, which transmit the radio signal via their antenna array. Because the intelligence lives in the device, AoD offers the system capacity and scale required for consumer (B2C) applications. (see Diagram 2)
AoD is still in its early stages but is on the watch list of many companies because it opens up a broad range of potential new precision location services for the previously untapped consumer market, much like AoA has opened the door in the enterprise and industrial markets. Participation of the software OS and hardware ODM providers will significantly help accelerate the adoption time of AoD on future mobile devices. AoD also requires significant interoperability work so that multiple smartphone brands and models can receive Bluetooth signals from Locators from multiple hardware vendors. 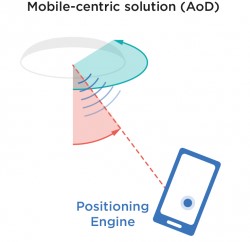 The Bluetooth 5.1 specification defines the radio interface up to low-level IQ data samples. The location system architecture itself is open to interpretation by individual RTLS vendors to build capabilities on top of the standard. A few have already done so using AoA combined with their own secret sauces. AoA and AoD can work within the same RTLS system, but AoD will require participation from the mobile OS and hardware vendors, such as Apple and Google, as well.
In the end, the success and further growth of both the RTLS and location-based services markets will depend on open, flexible systems, strong partner ecosystems and innovative use cases that provide undeniable value to both businesses and consumers alike.