The past two years have been turbulent and unpredictable. The industrial world as we knew it witnessed dramatic changes, largely shaped by the demands and restrictions imposed by the pandemic. In his opening address at Bentley Systems’ Year in Infrastructure Conference held last December, CEO Greg Bentley said that for the second consecutive year the conference is virtual. Although the restrictions of the pandemic prevented an in-person conference, it has inspired Bentley and its partners to prioritize resilience and adaptation for infrastructure assets and has accelerated the pace of going digital. The focus is now on sustainability, a circular economy, and “future-proofing” new development.

This blog captures the highlights of the conversations that Greg Bentley had with Rebellius and Avelini. 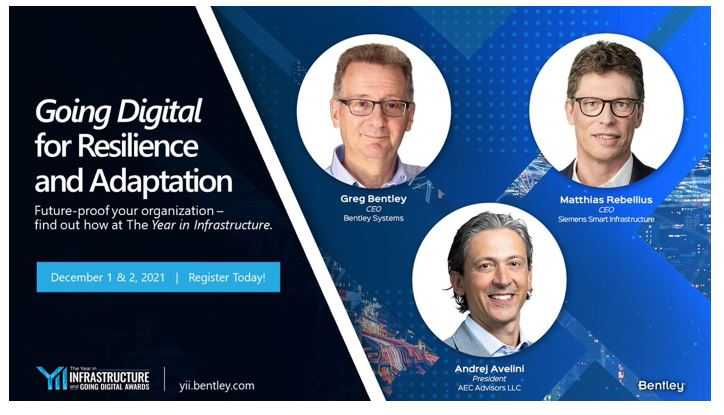 In Conversation with Matthias Rebellius

Greg Bentley described the relationship with Siemens as a digital co-venture in which both companies work toward seamlessly federating their respective digital twin cloud services for advancing infrastructure. The overall objective is to bring to market synergies between Bentley's physical infrastructure modeling and Siemens' functional or schematic modeling. As part of Bentley’s commitment to improve physical infrastructure for fitness to changing purposes and unexpected circumstances, including pandemics, environmental concerns, and adapting to necessary energy transitions, Bentley’s five-year strategic alliance with Siemens allows both companies to work in ways that will help address and solve these infrastructure challenges. Rebellius said, “In the heart of our partnership, we have a shared vision of creating digital twins for different verticals with enhanced technologies. And this is what we have done the last couple of years.”

While governments are moving toward allocating funds for “building back better,” trillions of dollars won’t help to add infrastructure capacity. Greg Bentley said the opportunity lies in extending the life of existing infrastructure assets safely, reliably, and cleanly through digital twins. According to Greg Bentley, “building better” must mean improving the resilience adaptation of these assets. And what the company is working on can make a big difference in future-proofing. Electrification of Europe’s rail systems was cited as an example of where future-proofing existing infrastructure is essential to achieve their net-zero goals. Although Siemens had its own 3D rail catenary design software, the company realized that rail engineers could improve their ability to electrify a rail system if they could integrate their catenary design software with other rail design functions. Bentley and Siemens partnered to generalize their software for any manufacturer’s equipment and incorporate it into the Bentley OpenRail environment. The alliance led to the development of OpenRail Overhead Line Designer, enabling rail designers to improve their efficiency.

Siemens Mobility and Bentley have partnered to deliver a blueprint of the digital railway in the U.K, added Rebellius. This unlocks the European Train Control System (ETCS), across the U.K and will increase the throughput significantly and make traveling more sustainable. Rebellius said the partnership Siemens entered with Bentley is of substantial length, as the European Train Control System will be deployed across the southern section of the mainline by 2029 followed by 30 years of maintenance. In this long-term partnership, future-proofing has to be built in, said Greg Bentley.

Other Areas of Collaboration:

In Conversation with Andrej Avelini

To present an in-depth look on how to future-proof infrastructure engineering organizations, Greg Bentley introduced Andrej Avelini, President of AEC Advisors. AEC Advisors is a leading investment banking and corporate finance firm that provides advisory services to executives and boards of architecture, engineering, and consulting companies (AEC). Avelini said that the pandemic had a net positive result on the industry. A survey on going digital for future-proofing proved that it is no longer a luxury, but a necessity. According to Avelini, “I think the pandemic very much tested the going digital initiatives firms in the AEC industry have been pursuing, and I think the industry passed with flying colors.”

He recently convened over 300 CEOs of architecture, engineering, and consulting companies, surveyed them, and identified four megatrends affecting the sector:

Survey findings reveal that infrastructure CEOs realize the value of digitalization and are championing and understand the improvements to their business that can come about from going digital. “Going digital isn’t an end in itself, but is an important enabler,” said Greg Bentley.