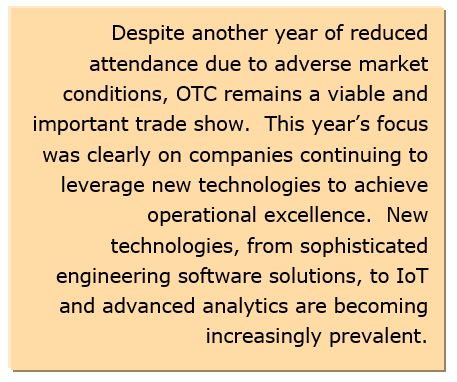 44 technical sessions, 13 panels, multiple poster sessions, and 24 topical breakfasts and luncheons.  A key theme that resonated throughout the conference was the increasing focus oil companies are putting on new technology breakthroughs that allow an increase in operational efficiency for the energy companies as they continue adjusting to living in the new paradigm of $50-per-barrel oil.

Despite attendance being down for the third year in a row, and the price of oil dropping more than 5 percent while the show’s doors were open, optimism among the exhibitors was clearly higher than last year.  Many exhibitors mentioned a rebound in orders for Q1 and expressed optimism for Q2.  While most large oil projects remain on hold, many exhibitors believed that some large projects could get kick started again over the course of 2017.

Most major process automation suppliers were present at OTC and it remains one of the only shows where you can see most of these suppliers in one place.  During the show, ARC visited with ABB, Emerson Automation Solutions, Honeywell, Rockwell Automation, Schneider Electric, and Siemens.  Emerson Automation Solutions was the only major automation supplier that held a press conference at OTC this year, focusing on its ability to help oil companies maximize their oil production.

The “new norm” of $50-per-barrel oil has put a lot of pressure on owner-operators to achieve the lowest cost of production.  Given the stubbornly low price of oil and the ongoing delay or cancellations of new projects for upstream oil & gas, the focus for the oil companies has turned to leveraging new technologies to optimize their operational efficiency 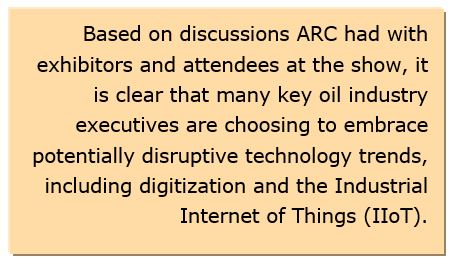 while lowering the cost of production and associated risks.  The ongoing focus on operational excellence has many oil companies turning to the leading automation suppliers for help understanding and leveraging the emerging technology trends, including digitization and the Industrial Internet of Things (IIoT).

Based on discussions with exhibitors and attendees alike, it is clear that many key executives of the oil companies have decided to embrace potentially disruptive technologies.  Recognizing this trend, automation suppliers are working diligently to increase their expertise in and leverage these technologies within their existing offerings to help their customers improve operating performance.

Similar to what ARC saw last year, OTC 2017 was not a big year overall for brand new product or application introductions.  The focus overall was more about how suppliers could help oil companies get the most from the emerging technologies.

Emerson Automation Solutions held a press conference focusing on its ability to help oil companies become “top quartile” performers in both operational certainty and project certainty using the company’s PlantWeb digital ecosystem.  According to Emerson, it offers customers the opportunity to improve their bottom line by over $350 million per year through the adoption of new automation technologies and services designed to maximize operational performance.

Schneider Electric demonstrated how its EcoStruxure for Oil & Gas can improve offshore oil production efficiency at every level.  According to the company, it can help oil companies cut their CapEx by up to 5 percent and OpEx by as much as 6 percent.  Schneider also offered visitors to its booth an immersive, 3D augmented reality tour of the company’s E-House solution.

Similar to last year, Siemens’ large booth included Dresser-Rand.  The company showcased its offshore technology portfolio with a focus on its digital solutions for drilling and production platforms and floating, storage, and offloading (FPSO) projects.  Siemens also discussed its partnership with Bentley to combine reality models with engineering and operational information on Siemens’ MindSphere platform to help oil companies realize their digitization strategy.

Despite the downturn in the oil & gas market, OTC remains a viable and important trade show, and is still one of the 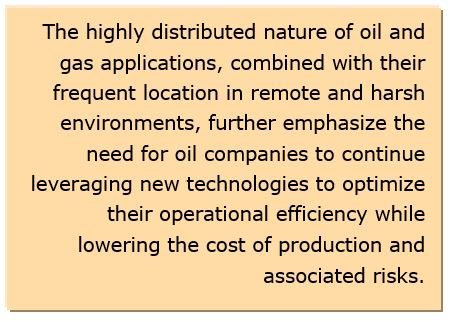 world’s best automation-related trade shows.  The increased focus on leveraging new, potentially disruptive technologies to optimize operational efficiencies is driving a lot of activity as oil companies struggle to align themselves to the “new norm” of $50-per-barrel oil.

IIoT, analytics, digitization, and more intelligent assets are increasingly finding their place in the world of operational technology for oil and gas.  The highly distributed nature of oil and gas applications, combined with their frequent location in remote and harsh environments, further emphasize the need for oil companies to continue leveraging new technologies to optimize their operational efficiency while lowering the cost of production and associated risks.