The Path of Grid Automation for 2050

The smart grid concept is ahead of its time when it comes to grid automation. Utilities complain Smart Meters have been used for little more than replacing meter readers and never performed the functions envisioned by the smart grid standards. Automation is always dependent on the nature of the process that is being automated. When the electric grid equipment or grid regulations change the grid automation must adapt. The electric grid has only started undergoing unprecedented changes. Many countries are imposing targets to create electric power without CO2. The coming changes will be a challenge for regulators, grid operators, utilities, and for consumers with no shortage of opportunities for suppliers. The United States has set a goal to reach 100 percent carbon pollution-free electricity by 2035. Carbon free electricity is required to electrify everything, which is the essential requirement to create an overall carbon free energy system that addresses the urgent problem of human induced climate change.

According to the IRENA World Energy Transition Outlook 2021, and also the IEA Net Zero by 2050 report, the world will see the amount of electric power consumption roughly triple by 2050. Electricity will expand to serve many of the nearly 800 million people, many in sub-Saharan Africa that do not have access to reliable electric power today. Electric grids will continue their rapid expansion and power carrying capacity in Asia as people that recently have reliable power will expand their electric machinery and appliances. The worldwide transition to electrify transportation, industry, commercial and residential buildings will require electric power to replace the heat and work now provided by fossil powered machinery. Tripling the amount of power consumed, curtailing CO2 emissions, and replacing end of life generation equipment means the source of our electric power is almost all new by 2050.

Virtually all equipment that generates CO2 will need to be electrically powered or equipped with CCUS (Carbon Capture Utilization and Storage). Electrification of transportation, building HVAC, and industrial processes like steel, cement, and ammonia will require newly designed equipment that sources their power from this new electric grid. Today, utilities rely on the ramping ability of natural gas generators to ensure grid stability, but by 2050 a very different control scheme will be needed. By 2050, this will drive the need for a grid interactive power consumer and many new sources of grid energy storage.

The charts below show the significant differences between the power sources in China and the US. Coal power in the United States generated about 20 percent of the country's electricity in 2020, which is down from 39 percent in 2014. By contrast, in 2020 coal-fired generation made about 62 percent of China’s power. Overall (from all sources not just power), the US is responsible for about 14 percent of the world’s CO2 emissions and China about 28 percent. Natural gas provided about 40 percent of U.S. electricity power generation in 2020 and grid operators find the superior ramping capacity of natural gas very helpful to meet the high loads during increasingly severe weather events. 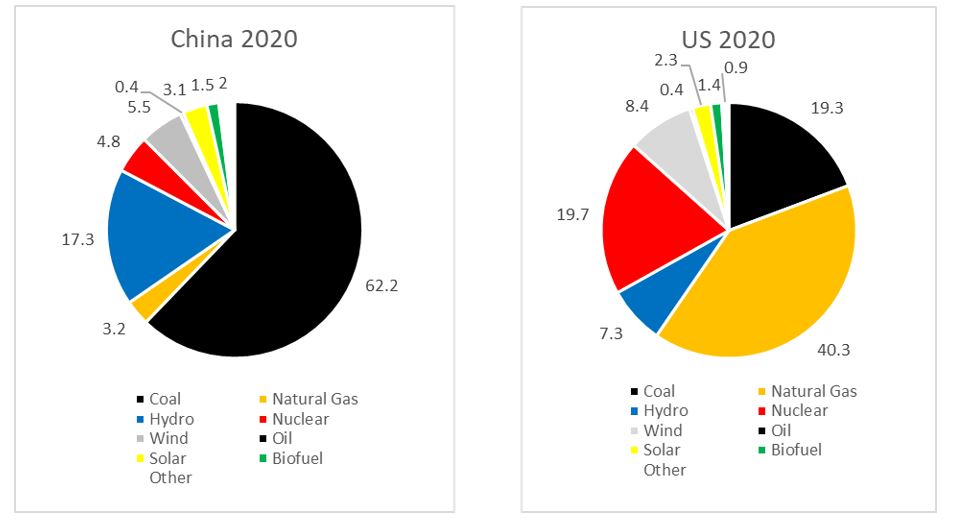 IEA describes the Stated Policies Scenario (STEPS) which considers only the specific policies that are in place or have been announced by governments in 2020. Assuming we follow the stated policies, according to IEA annual energy‐related and industrial process, CO2 emissions rise from 34 Gt in 2020 to 36 Gt in 2030 and remain around this level until 2050. If emissions continue this trajectory, with similar changes in non‐energy related GHG emissions, this will lead to a temperature rise of around 2.7 °C by 2100. In the STEPS scenario, renewables provide almost 55 percent of global electricity generation in 2050 (up from 29 percent in 2020), but clean energy transitions lag in other sectors. Global coal use falls by 15 percent between 2020 and 2050; oil use in 2050 is 15 percent higher than in 2020; and natural gas use is almost 50 percent higher.

IEA goes on to describe a “Net‐Zero Emissions by 2050” Scenario (NZE), which describes how energy demand and the energy mix will need to evolve if the world is to achieve net‐zero emissions by 2050. It also assesses the corresponding investment needs and explores key uncertainties surrounding technology and consumer behavior.

The US has a goal of carbon free power by 2035 and the Chinese have recently announced a goal to be overall carbon neutral by 2060.

China is in the early stages of developing a competitive market for grid regulation. With little natural gas China must rely on other grid stability methods, such as ramping coal and other sources of power with occasional curtailment of renewable power.  According to IRENA to meet the 1.5 °F by 2050, worldwide 73 percent of the installed capacity and 63 percent of all power generation would come from variable resources (solar PV and wind), up from 15 percent of the installed capacity and 7 percent of power generation globally today.

According to IRENA and other research organizations, the worldwide sources of power for generating electricity will be drastically different than today, and new mechanisms for balancing generation supply with customer loads must be found.

The charts below show how grids are powered today and how they will likely be powered in 2050. The 2050 grid with these sources of power is hard to fathom based on our past experience controlling the electric grid. The rampable fossil generation is essentially, gone so how will this electric grid balance supply and demand? Grid automation and smart grid technology can build almost any control algorithm imaginable, and reliably and promptly communicate between all generating and consuming devices on the electric grid. But how can that work to provide low-cost reliable power to every grid customer?

An emerging idea, already seen in off-grid microgrids and nano grids is to overbuild solar and wind so they can meet more of the load more of the time. Dr Perez at Clean Energy Power research and Tony Seba, a Silicon Valley entrepreneur suggest this approach. Overbuilding low-cost solar and wind reduces the need for expensive storage as generation and load are coincident more often. While some curtailment may be unavoidable, the increasingly frequent availability of substantially free power incentivizes innovation. For example, this low-cost power could find use in emerging technologies like green hydrogen via electrolysis or provide more incentives for residential, commercial, and industrial demand response markets to develop. Hydrogen is a unique chemical energy storage technology that is predicted by both IRENA and IEA to play a critical role for energy storage and industrial feedstocks.