A Sustainable Future as Seen by NTPC’s GETS

ARC Advisory Group participated in NTPC’s third edition of Global Energy Technology Summit (GETS) 2016, titled “Redefining Power Generation Landscape - The 5R Way.” The theme of this three-day Summit (November 7-9, 2016) hosted in New Delhi is in line with India’s ratification of the United Nation’s Paris Agreement on climate change and a sustainable future . The 5R concept: 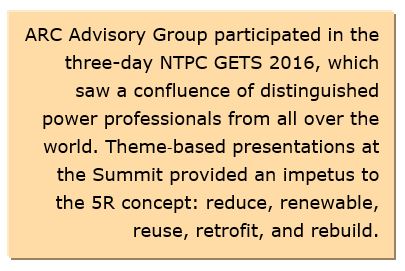 conviction to move from Blue globe to green earth, the 5R themes resonated through all the presentations and discussions at GETS 2016.

Distinguished power professionals attended the Summit from all over the world, with representatives from IEA (International Energy Agency) Paris, Government of India officials and various international technological heads. About 145 international experts actively engaged in technology development and deployment interacted with Indian experts, policymakers, and various stakeholders at the Summit. This year, three new sessions were introduced - Make in India: Success Stories, a Student Session, and a Round Table Conference.  The first showcased the establishment of manufacturing and testing facilities in India, either through indigenous efforts or by technology transfer from their principals, to manufacture super-critical power plant equipment/components.  The second encouraged students to contribute and be a part of the team for low-carbon power generation. And the third, the round table conference, focused on digital transformations for the new power generation landscape. This conference was comprised of the top personnel from NTPC and leading solution providers to the power sector:  ABB, Bentley Systems, Emerson Process Management, GE, Siemens, Aveva, and Toshiba. G. Ganapathiraman, Country Manager, ARC Advisory Group, India, moderated the conference.

This Insight provides an overall perspective of the challenges, solutions, and opportunities in India’s power sector. Subsequently, new trends and technologies that emerged at the Summit will be published as industry/technology blogs. 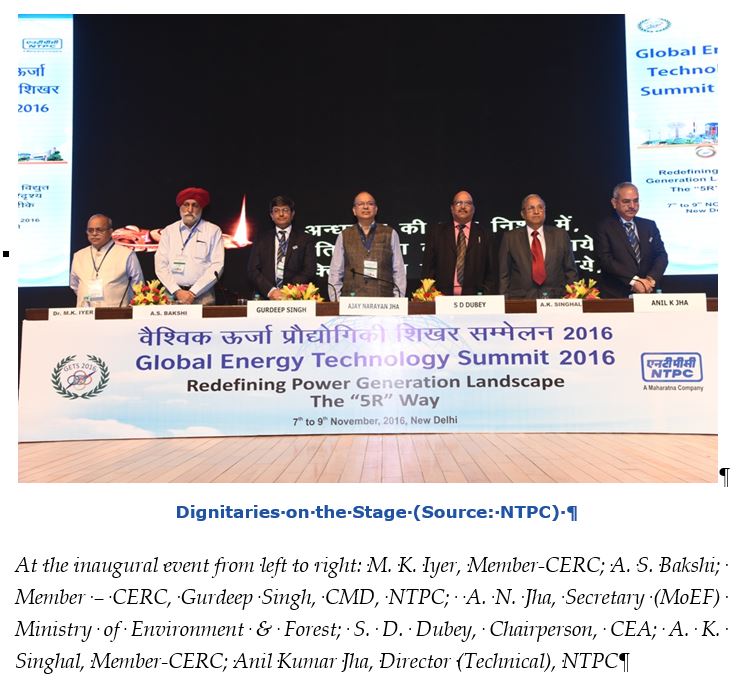 After the dignitaries appreciated the aptness of the theme and how imperative it is to deploy eco-friendly technologies, Anil Kumar 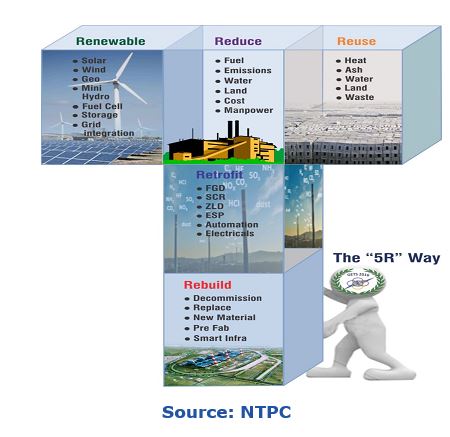 Jha, Director (Technical), NTPC addressed an audience of over 800 delegates. His presentation covered the gamut ranging from India’s current power scenario, challenges, opportunities, and projected growth. He spoke about NTPC in the Indian market context and said that although India is likely to meet the long-term IEA projections on energy demand & supply, the current mid-term will see a substantial increase in coal-based generation in addition to renewables.

Under each of the 5Rs shown diagrammatically alongside, Mr. Jha explained how the concept can be effectively utilized to meet the demand for clean, sustainable energy. His summation line says it all “We have only one earth to live on, so we better start taking care of it.”

The salient points of the changing power landscape are:

The inaugural session was followed by a panel discussion on the challenges and opportunities in the shifting energy landscape. Panelists comprised of IEA, Paris; First Solar, USA; GE, Switzerland; Steag, Germany; and from India’s power sector.

Sessions on the second and third day were conducted in two parallel tracks in separate auditoriums.  As ARC’s Raman moderated the round table conference on the third day, the spotlight will now shift to this lively, interactive discussion.

Round Table Conference on Digitalization in the Power Sector

Providing a backdrop to the discussions, Mr. Raman spoke about how technologies have evolved.

In the past 30 years, technology changes used to come one after another – Relay>Solid state>Microprocessor>DCS>Advanced DCS and so on.  Today, technology changes are occurring rapidly and almost simultaneously - Cloud, SaaS, social media, mobility, 3D scanning and printing, IIoT etc. Industries must embrace digitalization to remain competitive, he emphasized. As per ARC analysis, automation project spend is around 2-4 percent. For example, 2 percent for a fertilizer industry and around 4 percent for the power industry at the investment stage. However, the impact of automation on operations is 15-30 percent – and that is huge. The technology imperative of the power industry in India is to drive sustainable growth while reducing the carbon footprint and pursuing the best possible cost effective technologies to provide efficient, reliable and economically viable energy to support the GDP growth.

The moderator introduced a series of threads on digitalization in the power sector, and the ensuing discussion brought in multiple perspectives. The delegates discussed how digitalization has transformed the power industry, and more specifically how NTPC can deploy new technologies. The discussions were video-conferenced to 16 NTPC sites.

Some suggestions given to NTPC included:

Based on NTPC’s decisions, other utility companies are likely to adopt digitalization, making it a national initiative.

The first industrial revolution was powered by water- and steam-operated machines; the second by electrically powered machines; the third by electronics/IT; and fourth (the current one) by cyber-physical systems. The maturity level of digital in the power industry in 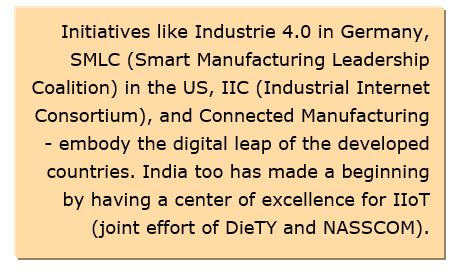 India from the industrial revolution standpoint is assessed to be between 3.0 and 4.0.  Companies have surpassed electronics/IT; and have made some headway with fieldbus devices like smart positioners/smart transmitters - an extension of IoT, but the consensus was that more understanding of the available technologies and deployment is needed.

Initiatives like Industrie 4.0 in Germany, SMLC (Smart Manufacturing Leadership Coalition) in the US, IIC (Industrial Internet Consortium), and Connected Manufacturing - embody the digital leap of the developed countries. India too has made a beginning by having a center of excellence for IIoT (joint effort of DieTY – Department of Electronics and Information Technology - and NASSCOM). A high degree of standardization is needed to seamlessly integrate systems and software from multiple sources; and however difficult, it needs to be done to remain competitive in a strict, regulatory environment.

Digitalization, the delegates said, is about leveraging existing assets, improving efficiency, analyzing the intersection point between physical and virtual, capturing Big Data – typically 25-35 GB for one unit. While doing this, choice of the platform becomes very important for data analytics, cloud infrastructure and recommendations on auto-manual controls. Automation vendors should be fully involved in the platform selection process; and, the selection should not be done with IT vendors only.

Digital transformation can be seen at all levels, said a participant: industrial product; operations; business model; and aftermarket service. In a connected world, IIoT is a tool that helps organizations perform at optimum levels.

The three-day Summit saw the convergence of a marquee list of the power industry stakeholders: end users, suppliers, national and international agencies, etc.  Brainstorming ideas and new technologies in the power sector brought forth a slew of actionable points for all those keenly tracking the trends:

If you would like to buy this report or obtain information on how to become a client, please Contact Us.