What Is OPC UA TSN for Industrial Networking?

Industrial processes in the era of IIoT and Industrie 4.0 need open communications between devices, systems, and layers.  The industry began replacing industrial networks with Ethernet over a decade ago.  Since Ethernet was designed in the 1970s for office

use, the technology’s inherent drawbacks drove automation suppliers to create industrial variations of Ethernet to address those drawbacks.  Unfortunately, these developments resulted in a half dozen different versions of “industrial” Ethernet, each representing the technical prowess, but also the commercial interests of the respective automation suppliers.  As in the fieldbus wars of the previous decade, end users were again lured into choosing an architecture favorable to a particular supplier.

Today, a new development is gaining momentum that, over time, could rectify this situation.  This development unites OPC UA, the well-established, de facto industry standard, with its new publish/subscribe model and “time-sensitive networking” (TSN), an extension of Ethernet specifications that enables deterministic behavior.  OPC UA TSN, its current moniker, has the potential to redefine and unify industrial networking as we know it.

By definition, Ethernet (standardized under IEEE 802.3) does not guarantee deterministic message delivery and real-time behavior.  However, extremely high performance enables it to serve most such applications, provided that network traffic is managed.  Ethernet’s natural habitat is the office world, ruled by the priorities of that environment, the so-called “CIA triad” (confidentiality, integrity, availability).  While industrial users can agree on the importance of these characteristics, most prioritize them in a different order.  For example, the top priority in industrial applications is availability, meaning that equipment and the supporting automation architecture must be highly available for the production process.

To adapt standard Ethernet to the needs of industrial users, several suppliers took matters into their own hands and modified Ethernet to enable various forms of guaranteed real-time behavior.  The problem was that no single, unified version of an “industrialized” Ethernet emerged and the industry fragmented into commercial camps.

OPC Unified Architecture (OPC UA) is the latest development of what is now known as “OPC Classic,” an open application layer 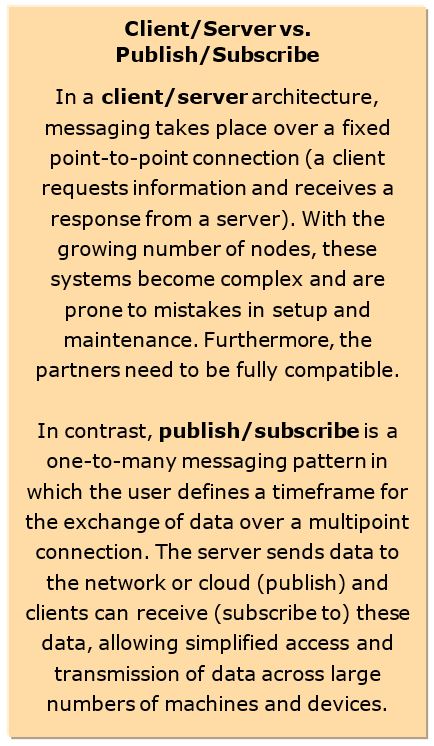 However, until now OPC UA lacked real-time capabilities for machine-to-machine communication, machine-to-cloud communication, and data management.  To address this, the OPC Foundation introduced a publish/subscribe model (pub/sub), which replaces the classic client/server architecture.  This increases efficiency greatly while reducing complexity.

TSN refers to a new set of standards that define deterministic behavior that will be added to existing IEEE standards 802.1 and 802.3 (Ethernet).  Once this work is finished, industrial suppliers and users will be able to apply standard Ethernet in real-time applications that require deterministic performance.  TSN defines time-controlled message services in a switched Ethernet network, and thus provides the basis for deterministic and real-time communication by using a common network clock and schedule.

With TSN, each switch along a path assigns the incoming message a QoS-classification. The integrated “traffic shaper,” then forwards the message at the predefined time using the common timeframe and a schedule.  This ensures minimum latency at each component of the network and, as a result, across the whole network.  This behavior is achieved through software support in standard Ethernet networks with existing devices and TSN-compatible switches. Compatibility between TSN and conventional IT networks is supported because the mechanisms for real-time messaging are defined on the lower OSI layers (L1-L2) without any changes to the upper layers. 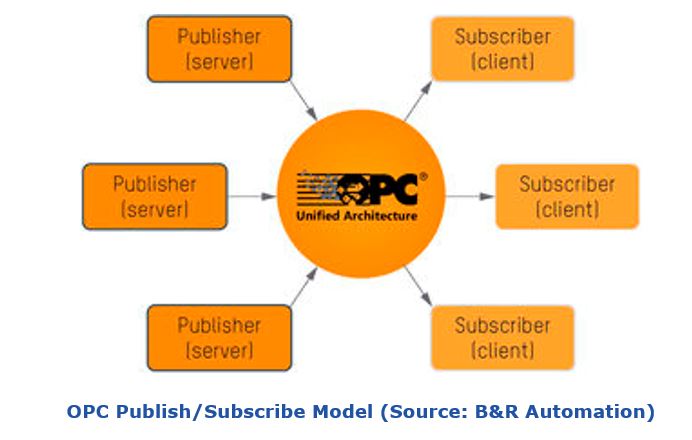 OPC UA TSN is the result of the combination of OPC UA, the pub/sub communication model, and the performance capabilities of TSN.  It allows deterministic transmission of real-time data and offers the flexibility and openness inherent to OPC UA, while adhering to recognized, proven, and familiar IEEE standards.   While this configuration appears to offer everything the industry needs for production processes in today’s IIoT/Industrie 4.0 world, the caveat is that the new OPC service pub/sub may lack the maturity of existing commercial pub/sub middleware products.

TSN development is managed by the IEEE 802 Time-Sensitive Networking Task Group, which started out in 2012 as the Audio Video Bridging Task Group.  Initially driven by the professional audio industry, at present TSN is a hot spot for the automotive industry which seeks to meet the needs of multiple on-car applications, from infotainment to autonomous driving. This has expanded the TSN scope.  The automotive requirements are nearly identical to those of industrial networking, so the task group expanded the focus of TSN to include this domain as well.

Ethernet + OPC + TSN = One Network for Everything?

ARC Advisory Group cannot underestimate the implications of a new, emerging solution for industrial networking.  Over a decade ago, industry suppliers failed to cooperate on a single solution for deterministic Ethernet, resulting in a half dozen iterations.  While it’s tempting to think that this new solution could make existing industrial Ethernet obsolete, the reality likely will be different.  End users have made huge investments using existing technology and there is no clear business case to “rip and replace” installed networks.

Industrial controllers and smart devices communicate using supplier-specific protocols.  These protocols often support specific functions, so it would be difficult to standardize them.  With an Ethernet-based network, multiple protocols can co-exist, so devices can support other protocols in parallel with OPC communication.

OPC UA TSN is designed as a real-time Ethernet communication standard that provides open, deterministic, real-time communication between automation systems, as well as to the cloud for Industrie 4.0/IIoT-based production.  While the technology is still emerging, it benefits from the industry’s familiarity with the vendor-neutral OPC technology and from the fact that real-time behavior results from new IEEE standards and not supplier “fixes.”  These factors will go a long way towards helping the technology gain acceptance across the industry.

Several leading suppliers and associations are already supporting OPC UA TSN.  These include ABB, Bosch Rexroth, B&R, Cisco, General Electric, Kuka, National Instruments, Parker Hannifin, Schneider Electric, SEW Eurodrive and TTTech.  First solutions were presented in 2016 in Germany at the Hanover Fair and the SPS IPC Drives show.  The major automation consortia at the SPS IPC Drives 2016, including Profinet International, ODVA, SERCOS and AS-I, commented on the TSN trend and acknowledged the need for unified real-time, deterministic communication.  However, none of these currently support the proposed OPC UA TSN standard.  According to the associations, most Ethernet-based fieldbuses will be able to “tunnel” the new communication protocol, but how they handle real-time behavior with TSN remains to be seen.

OPC UA TSN has piqued the interest of industry players and is gaining momentum.  While some network organizations seem to have been taken by surprise, others are already demonstrating how the technology is the next logical step in the evolution of industrial communications.

OPC UA TSN is by far the most interesting development of the last decade in industrial communications.  While it will take some time for suppliers and consortia to sort out their respective visions of how this technology will fit into their architectures, the fact that its two main components stem from neutral sources will help expedite the process.  The immaturity of OPC pub/sub represents a risk to this technology bet.  Another risk is that other technologies (such as software-defined networking) will become more commonplace than TSN.

End users should keep an eye on developments and use the chance to communicate their requirements to suppliers, especially in terms of how future automation architectures will support their IIoT and Industrie 4.0 initiatives.

If you would like to buy this report or obtain information on how to be-come a client, please  contact us