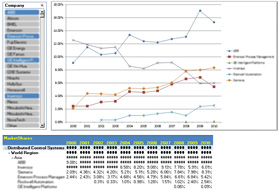 In developed regions, the emphasis will be on improving efficiency, reducing emissions, and improving ramp rates. The emerging countries, and China in particular, are undergoing a shift from coal-fired power generation to nuclear, wind, and solar generation. And in Germany, Switzerland, and Italy, the “dash to gas” in the wake of the Fukushima nuclear disaster in Japan, will replace much of the existing nuclear generation capacity with new gas- fired combined cycle and renewable power generation capacity.

The resurgence in power generation projects – including many large greenfield projects, will not only drive demand for DCSs, but also for CPM, APC, optimization, and training simulators.

Regionally, the highest growth rates will occur in Asia and Latin America. EMEA and North America have not yet recovered fully from the recession and hence ARC estimates lower than average growth for these regions.

This market study may be purchased as an Excel Workbook.