At the ARC Industry Forum in Orlando, Florida a panel discussion covered the topics of autonomous mobile robots (AMR) and drones in industry.  Here, in Part 2, we’ll focus on drones, specifically safety and regulatory standards, business justification, and the future vision for deploying drones in various industry sectors.

The panelists, both speaking from the vantage point of industry expertise and experience, discussed the gap between regulatory policies and actual implementations, and responded to audience queries on issues ranging from using drones on construction sites to future plans.

Rick Rys has a broad background in industrial automation.  He has worked in refining, chemicals, power, electric grid related functions, and software development.  At ARC, he does research on drones and has completed a market analysis report on drone use in the construction industry and continues to track developments in use of drones in industry, infrastructure, and smart cities.

What’s Real and What’s Hype with Drones In Industry?

Mr. Luxion said that everything that was discussed earlier about ground robotics maps directly to the issues faced in the air, but is compounded by the complexity of flight and the level of safety.  Because when the robot encounters a problem and is falling out of the sky, the situation is very different.  Companies like Amazon have come up with creative solutions, but these must be integrated into the US National Airspace System (NAS). 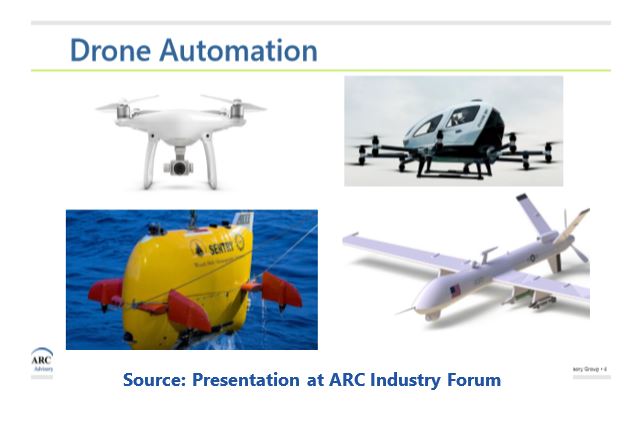 Until the regulatory safety and risk issues are validated and proven, the FAA will not give the exemptions needed to operate, explained Mr. Luxion.  Visibility of other manned and unmanned aerial vehicles is critical in the air because the new UAVs (unmanned aerial vehicles) need to know what's around them.  These air traffic management technologies are currently being developed and standards of performance are emerging.  The same issues apply to industry standards.  “The visions are probably great, but we need more effort in freeing up that regulatory risk to get them there,” said Mr. Luxion.

Adding to that, Mr. Rys said that while drone applications for inspecting industrial facilities appear to be more advanced than for using drones for deliveries, they don’t always turn out to be a great fit.  As an example of this, he mentioned that Duke Energy had researched all the different things they could use drones for, but ultimately determined that it wasn’t effective for transmission & distribution due to line-of-sight regulations for drones.   Next, he spoke about the US FAA Part 107 regulations (see  graphic) and the limitations these impose.