Five years ago, pretty much nobody outside of Google had heard of Kubernetes. Today, the IT world has converged on Kubernetes as a key part of their future enterprise software architecture. This architecture consists of containerized application workloads orchestrated by Kubernetes that can be freely relocated from public clouds to private clouds and even to the enterprise edge. Enterprises are now just beginning the journey to containerize and deploy existing and future applications using this revolutionary new software architecture.

For industrial applications, especially embedded system applications, this new architecture represents both an opportunity and a major challenge. The opportunity stems from the ability of resources that are close to the edge to easily access data, perform analytics, and derive value at minimal cost, latency, and risk. The challenge is because edge devices and edge compute resources are generally insufficient to adopt this software architecture at present. Furthermore, the path to integration of the cloud (orchestrated by Kubernetes) and the edge is uncertain at best at this early stage of the market, especially given this mismatch between the requirements of Kubernetes and the available resources at most edge compute and edge sensing devices.

However, the extension of this new enterprise architecture to the edge and especially to the industrial edge is critical for the future of industrial automation and the 4th industrial revolution, the so-called Industry 4.0. Because of this criticality, ARC Advisory Group is beginning a research effort to map out and evaluate this nascent and varied landscape of technologies for integrating the industrial edge with the future cloud-native computing architecture that enterprises will adopt.

During this research, ARC Advisory Group will be studying the products and technologies of many venture 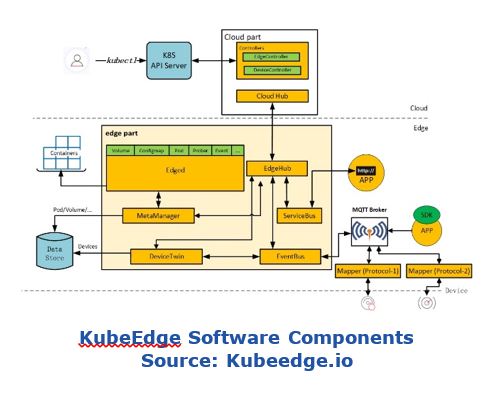 stage firms as well as open source software projects designed to bridge this gap. In addition, ARC will be looking at adjacent industries with similar issues. These include infrastructure for the 5G telecommunications edge networks, and requirements to manage large fleets of autonomous or intelligent vehicles, as well as the new networking opportunities afforded by 5G itself.

With this industry and technology at such an early stage, detailed market forecasts would be very speculative. Recall, that when Kubernetes was donated to the open source community by Google 5 years ago, it was not at all certain that Kubernetes would become the overwhelming choice for container orchestration. The changes in the software landscape that will occur over the next 5 years will likely be at least as revolutionary. As a result, ARC's deliverables for this research will include a set of podcasts, webcasts, and written reports for our advisory services clients. ARC invites relevant suppliers of hardware, software, and services to contact ARC (at this link) if they wish to be included in this research.