Ethernet and OPC UA TSN for Automation Architectures of the Future 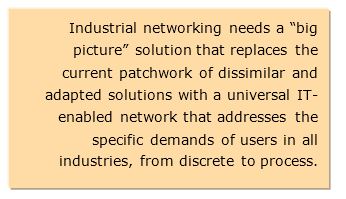 modifications. Today’s industrial companies feel the influence of commercial information technologies (IT) stronger than ever, driven by initiatives like Industrie 4.0 and the Industrial Internet of Things (IIoT). Industrial networking is no exception. As industrial devices become more intelligent and better connected, the amount of data they share grows exponentially. To meet these growing demands, industrial Ethernet is evolving to support automation architectures of the future.

ARC Advisory Group has been keenly observing developments in this space. Key observations to date include:

Drivers for a New Automation Infrastructure 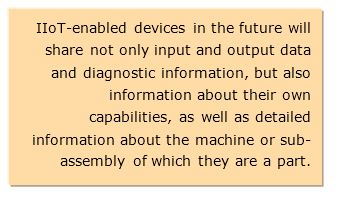 realize these, manufacturers need a new infrastructure that meets new demands for bandwidth, speed, and connectivity.

In the spirit of Industrie 4.0, machine builders are adding new smart sensors to extract data from devices and share it with other devices, systems, and applications, with the goal of adding flexibility, enhancing performance and efficiency, and improving machine uptime. Such IIoT-enabled devices in the future will send not only input and output data and diagnostic information, but also information about their own capabilities, as well as detailed information about the machine, equipment or sub-assembly of which they are a part.

Current architectures that use a combination of standard Ethernet and industrial Ethernet appear to lack both the performance and capacity required to keep up with the growing demands. Developments in industrial Ethernet thus far have focused mainly on meeting specific application requirements, such as high-speed deterministic behavior when coordinating multiple servo axes. What is needed is a “big picture” solution that replaces the current patchwork of incompatible and adapted networking solutions with a universal IT-enabled network that addresses the specific demands of users in all industries, from discrete to process.

The industrial world waited for years to adopt Ethernet-based networking, long after Ethernet had become a defacto standard in office environments. The main reason for the delay was the fact that Ethernet didn’t meet industrial requirements for deterministic behavior. To remedy this situation, several automation suppliers set out on their own and created modified versions of Ethernet. The result was about a half dozen different versions of what came to be called “industrial Ethernet.” The problem was that modifications were never made with the cooperation of IEEE, so they never became part of the underlying Ethernet specifications. Instead, the various industrial Ethernets were overseen by industrial consortia made up of automation suppliers. However, this situation is about to change. 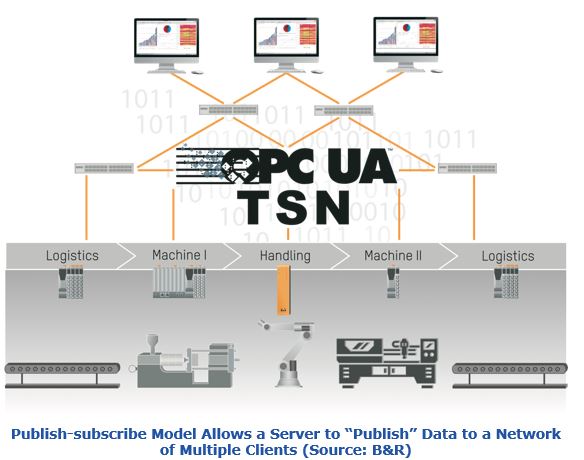 Thanks to developments driven by the OPC Foundation, the question of real-time behavior on Ethernet is being addressed on two fronts: 1) the introduction of a publish-subscribe model for OPC Unified Architecture (OPC UA), and 2) the implementation of the IEEE 802.1 standards for time-sensitive networking (TSN) that add deterministic behavior to standard Ethernet. The result currently goes under the working name, “OPC UA TSN.”

What Is OPC UA TSN? 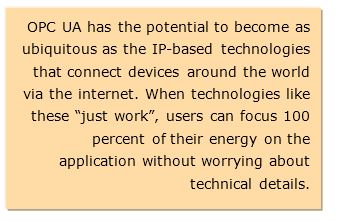 With OPC UA, users can take advantage of OPC’s data model and services that provide semantic interoperability. This enables clients and servers to exchange data with an agreed and shared meaning, rather than just mapping bits and bytes. In addition to the data model, rules describe how to transform every physical system into a model that can be represented in an OPC UA server.

TSN processes information on Ethernet more efficiently and therefore faster. It can schedule frames from multiple nodes so that they are received as a chain, thus maximizing available network performance. The technology uses cut-through switching where a switch starts forwarding a frame as soon as the destination address is processed, sometimes before the whole frame has been received. It also allows the use of “store and forward,” a technique that stores information in an intermediate station from which it can be sent at a later time to the final destination. By supporting these functionalities, TSN addresses the requirements of a wide variety of applications, ranging from servo axes in a line topology to large-scale mesh networks.

OPC UA TSN is a compelling new technology full of ramifications for industrial networking. The next section addresses typical questions from industry stakeholders.

ARC recognizes the value of the OPC UA TSN Ethernet-based industrial networking solution described in this Insight and believes it is the right way forward for industry since it is well-positioned to support future automation applications.

Based on research and analysis, ARC makes the following recommendations: