India’s IT industry continues its upward momentum as most of the information technology (IT) services companies covered in the report exhibited above-average growth.  In this report, we analyze the revenues of India’s IT services sector for the third quarter of financial year 2018-19 and compare these with the same period the previous year.

This report discusses the financial results of the top 19 India-based IT companies listed on the National Stock Exchange (NSE), Bombay Stock Exchange (BSE), or both.  We believe this Insight provides a representative sample of India’s IT market.  The suppliers included in this report recorded combined quarterly revenue of $15.2 billion, representing 7.4 percent year-over-year growth rate.  Only three out of the 19 companies reported year-over-year decrease in software or product revenues, while the rest showed growth in Q3.  The rupee depreciated by 7 percent during the quarter compared with the same period last year.

Supplier Revenues from India’s IT Industry 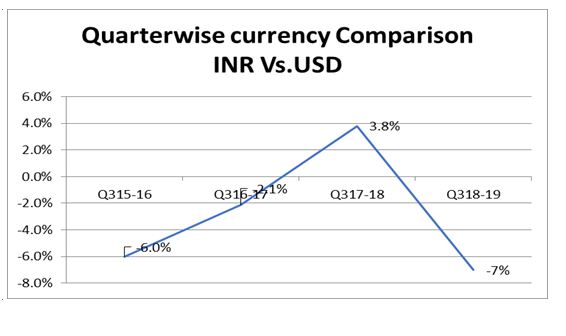 This ARC Advisory Group report discusses the most recent quarterly revenue results of the major publicly traded IT services companies based in India.  We translated financials reported in Indian rupees to US dollars using an average exchange rate for the given reporting period.  Owing to this translation, some companies may show negative growth.  The suppliers’ reporting period for this analysis is the quarter ending in December unless stated otherwise.  We have considered the consolidated revenues for all vendors, including subsidiaries’ revenues, except for Wipro, for which we only considered IT products and services.

3i Infotech reported total revenue of $44.03 million for the quarter ending December 31, 2018.  This represents a growth of 20 percent compared with the same period prior year.  Ninety-five percent of 3i Infotech’s revenues came from “IT Solutions” (software products & services, software development, consulting, and IT infrastructure services) and the rest from “Transaction Services” (IT-enabled services).

Infosys reported $2,987 million revenues for the quarter ended December 31, 2018.  This represents 8.4 percent growth over the same period the prior year.  Infosys and its subsidiaries added 101 customers during the period.  Vertically, 32.5 percent of revenues came from insurance banking and financial services; 17.4 percent from manufacturing & hi-tech; 22.6 percent from retail and life sciences; and 24.7 percent from energy, utilities, and communication and services, and 2 percent contributed by others.  By service offering, business IT services contributed 94.5 percent; products, platforms, and solutions 5.5 percent.  Geographically, 60.4 percent of revenues came from North America, 24.2 percent from Europe, 2.6 percent from India, and 12.8 percent from ROW.  Infosys and its subsidiaries had a total headcount of 225,501 employees at the end of this quarter.

Mindtree reported revenue of $251.5 million for the quarter.  This represents 17.4 percent year-over-year growth in revenue.  Geographically, 73.4 percent revenues came from the Americas, 18.7 percent from Europe, 3.6 percent from India, and 4.2 percent from ROW.  Vertically, 39.4 percent of revenues came from technology, media and services; 21.7 percent from BFSI; 22.3 percent from retail, CPG, and manufacturing; and 16.7 percent from travel & hospitality.  Among service offerings, application, development contributed 50.7 percent, infrastructure and support 23.4 percent, independent testing 12.8 percent, consulting 3.2 percent, and package implementation 9 percent.  Finally, IP-led revenue contributed 0.8 percent.  The company added 23 new clients in this quarter.  The company’s employee strength was 19,908 at the end of December 31, 2018.

NIIT Technologies reported revenue of $32.7 million for the quarter ended December 31, 2018.  This represents a growth of 1.2 percent from the prior year.  Geographically, revenues from the Americas contributed 49 percent, EMEA contributed 33 percent, and ROW contributed 18 percent.  Vertically, banking, insurance and financial services contributed 15 percent, and insurance contributed the major revenue with 30 percent; travel & transportation 26 percent; and other contributed 29 percent.  Segment split is as follows – application development and management contributed 68 percent, business process outsourcing 4 percent, management services 18 percent, system integration and package implementation 4 percent, and IP assets 6 percent.  In Q3, the company added 10 new customers to its client list. The headcount was 10,144 at the end of this quarter.

Ramco reported revenue of $20.3 million with a growth of 2.8 percent in this quarter.  Majority of Ramco’s revenue came from markets outside India.  The company recorded an upward growth in this quarter.