Digital transformation strategies have evolved from cloud-centric architectures to those that increasingly rely on the industrial IoT edge.  Customers look to the edge to address shortcomings of cloud-centric strategies in areas such as latency, bandwidth, OT protocol support, and security, leading to strategies that emphasize “edge where you can, cloud where you must.”  These sentiments continue to propel Industrial Ethernet switch market growth, which exceeds that of the overall industrial automation market.

The industrial IoT edge concept is evolving in response to refined edge-to-cloud relationships, including ongoing tiering into a connectivity-centric “thin edge” vs. a compute and store-oriented “thick edge” characterized by products such as industrial edge servers.  While 5G networks possess tremendous future potential in both industrial and infrastructure applications, Industrial Ethernet wireline networks are the current technology of choice at the thin edge.   Ethernet’s advantages in core performance areas, such as speed, bandwidth, and capacity, remain compelling relative to legacy fieldbus and most existing wireless alternatives. 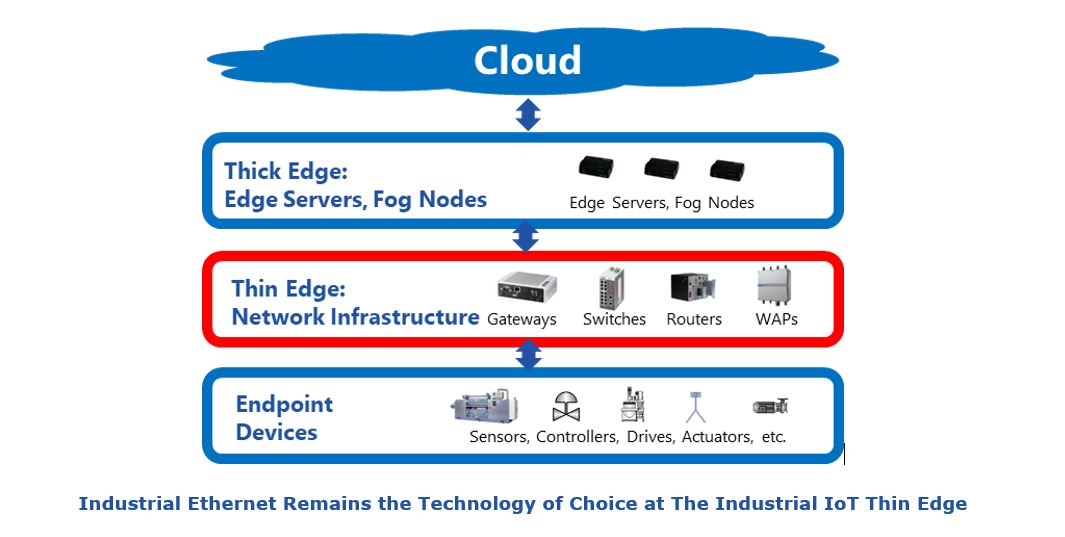 This thin edge, or connectivity tier, is undergoing profound change due to continuing technology evolution and standardization that is expanding its reach and capabilities.  Speed and bandwidth continue to increase, and suppliers are responding by introducing switches supporting GB, 2.5 GB, and 10 GB speeds.  PoE standards, important for powering edge devices ranging from wireless access points to video cameras used in surveillance applications, are similarly evolving, with devices supporting the new 90-watt IEEE 802.3bt standard ratified in 2018 already becoming available.

IEEE 802.1 TSN and the associated joint IEC/IEEE 60802 TSN Profile for Industrial Automation have the potential to deliver a common real-time industrial Ethernet, eliminating the need for proprietary implementations to enable deterministic performance in even the most demanding applications.  Industry efforts are underway to extend the possibility of a unified industrial network stack by combining the OPC UA publish-subscribe specification with TSN.  These developments have the potential to overcome decades of fragmented, proprietary industrial network architectures and further the evolution of the industrial IoT thin edge.