These are exciting times in the automation industry. Digitization is rapidly getting momentum. This week, Siemens, together with 18 partners, took an important step by establishing MindSphere as one of the most important industrial cloud ecosystems. ARC attended the event in Berlin.

The IT world is currently dominated by major US platforms such as Google, Amazon, Microsoft and Facebook, or in China by Alibaba, Wanda and Tencent. Now, some of these companies are setting their sights the industrial world.  Yet, classic industrial automation companies are ready to counter, and this week, Siemens did.

The digitization of industry is off to a promising start but cannot be compared to the consumer sector yet. Many industrial companies have introduced their own cloud platforms. The market for industrial IIoT platforms or cloud is heterogeneous and it is not clear which platform will survive in the long run. With the launch of MindSphere two years ago, leading automation supplier Siemens made it clear that the company intends to be a major player in IIoT platforms as well. With the foundation of the MindSphere World Association, Siemens is now on a promising path to achieve this goal. 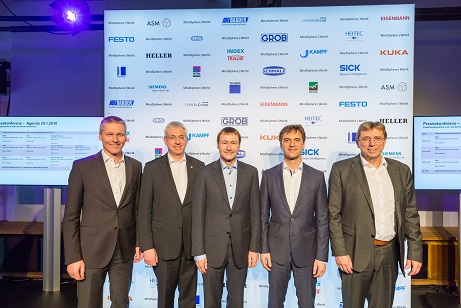 According to Siemens, creating Mindsphere World is an important step in promoting the worldwide diffusion of the MindSphere ecosystem as an open IIoT platform. Participants from emerging and fast-growing industrialized countries such as India and China, are presently missing, as well as companies from the US or Japan. Siemens emphasized that an important next step is the expansion and internationalization of members and the user community and that any company or university can join the association.

Siemens and GE are not the only companies offering their own IIoT platforms. Several other industrial companies have taken the plunge aw well, such as Trumpf (ADAMOS) and KUKA (Connyun), both of which are members of the new alliance. KUKA admits that the company will have to support a number of platforms in the future.

Main Goals of the Association

Siemens and its fellow alliance members announced six main objectives of the association:

1. Building and further developing an IIoT ecosystem based on MindSphere

2. Recommendations on technical requirements for the MindSphere operating system for the benefit of users

3. Supporting members to develop or enhance technical solutions on MindSphere and enter new markets in the digital economy

4. Contact with private and public institutions for opinion and decision-making

5. Promotion of science and teaching (cooperation with universities and young talents)

6. Joint marketing measures and public relations for the association and its interests

ARC is curious to see if the association and it members will establish itself as a common voice and speak as one body in the future with initiatives such as the Industrie 4.0 platform or the IIC and other standardization committees. This would promote the necessary transparency, interface openness and standardization in general in the industry.

Siemens expects different IIoT platforms to coexist and the market to consolidate over time. According to Jan Mrosik, CEO of Siemens Digital Factory Division, "federative” clouds are an idea, pointing out that MindSphere is an open platform with open interfaces. However, Mrosik does not expect so many different IIoT platforms to remain on the market. In the long run, he can imagine three to four.

Siemens presented use cases to show where and how MindSphere and its applications are already being used successfully. Machine builder Heller, for example, is using MindSphere and its applications to let customers pay for the use of Heller machines, instead of buying them (hardware-as-a-service). Heller makes data worldwide available for their customers via the Siemens IIoT platform. Another example is how Eisenmann networks its own machines to compare production, quality and maintenance data with other machines to increase efficiency and productivity. Deutsche Bahn has equipped its electric locomotives with hardware running MindSphere applications to develop data analysis models with which the profitability, availability and reliability of the locomotive fleet can be improved.

IIoT-platforms, as discussed on several blogs on https://industrial-iot.com/  will be high on the agenda on the upcoming ARC Industry Forums in Orlando in February and on the European Industry Forum which will take place in May this year. ARC is looking forward how GE and all other players will react to this strategic step from Siemens. It will be interesting to see how many IIoT platforms the industry really needs.