This ARC Advisory Group Strategy Report is a follow-up to last year’s report on Best Practices for Achieving Excellence in Warehouse Operations. That survey-based research showed that the best-run warehouses – warehouses that are productive, safe, service oriented, and have low turnover – showed the importance of warehouse management involvement.  More than half the practices that contribute to excellence in warehouse management relate to management techniques. This report – also survey-based, takes a deeper look at those management techniques.

It’s becoming harder for warehouses to retain workers. Further, once a worker leaves, it’s also more difficult to find a qualified replacement. Finally, it takes time to bring new workers up to speed. Thus, management techniques that help in retention and productivity are increasingly important.

According to ARC research, the best-run warehouses all subject managers to 360-degree reviews, train managers in how to give effective feedback, and provide employees with feedback frequently and fairly.  However, just because a company uses a management practice, does not ensure that a warehouse will be well run!  Well-run warehouses employ these techniques significantly more often than less well-run warehouses. But, clearly, there are best practices associated with using these techniques properly and effectively.

Last year’s report was based on a survey of 176 qualified respondents. That report used a balanced scorecard approach to identify the practices that contribute to excellence in warehouse management.

A well-run warehouse is productive, safe, contributes to high customer service, and has low turnover. It is tough to perform well in all these dimensions.  In that earlier survey, only 17 percent of respondents worked in warehouses that performed well across the board.

That report found several management techniques or practices that were likely to be employed by the top-performing companies. Those practices included:

Management clearly matters. More than half the practices that contribute to excellence relate to management techniques. While good management techniques can be learned, they can be deployed in either a robust or superficial manner. Further, diligence counts.  A good warehouse manager does not sit in his/her office; but is out on the floor observing and interacting with people.

Hiring and Turnover Trends Highlight the Importance of Warehouse Management

But the concern is not just the number of applicants per job, but the quality of those applicants. Fifty-nine percent of respondents said that less than half of their applicants had prior experience working in a warehouse. Thirty-five percent hire those with a criminal record, with drug possession/distribution and burglary the crimes companies are most willing to overlook. 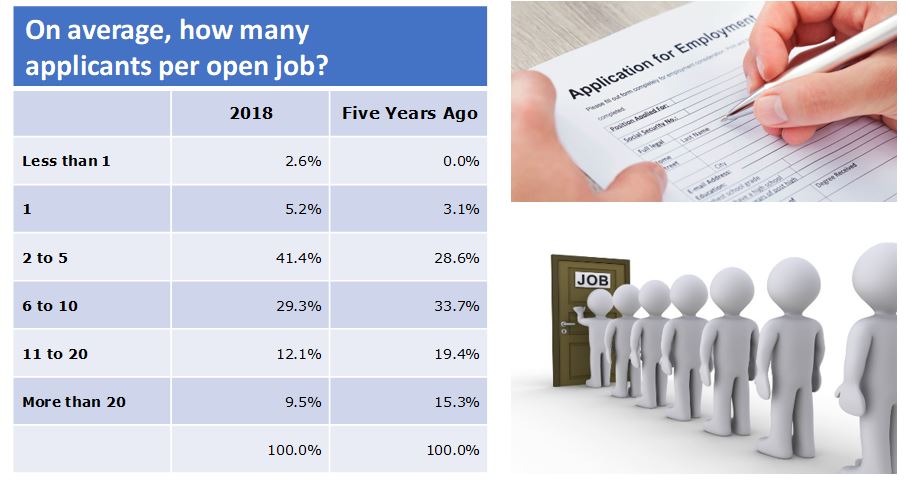 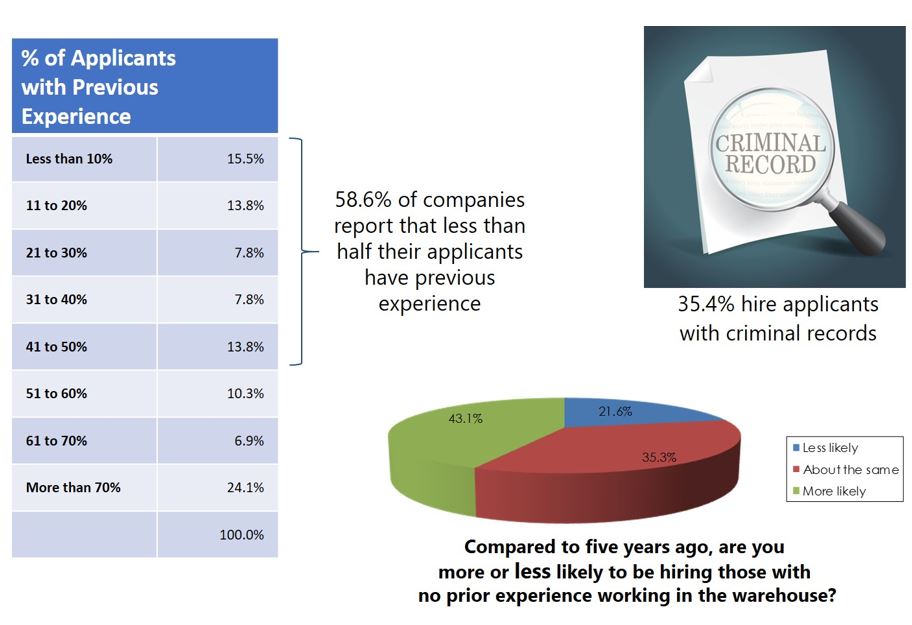 Expanding the Pool of Applicants

The numbers are very similar when it comes to the percentage of supervisor/manager roles occupied by women.

The first management technique associated with extremely well-run warehouses is to have managers participate in 360-degree reviews. This professional feedback opportunity enables a group of coworkers to provide feedback on an employee’s performance. The feedback is generally asked for by the manager’s manager. Coworkers who participate in the 360-review usually include the boss, several peers, reporting staff, and functional managers with whom the employee works regularly. Hence, the name of the feedback opportunity comes from the fact that performance feedback is solicited from all directions in the organization. 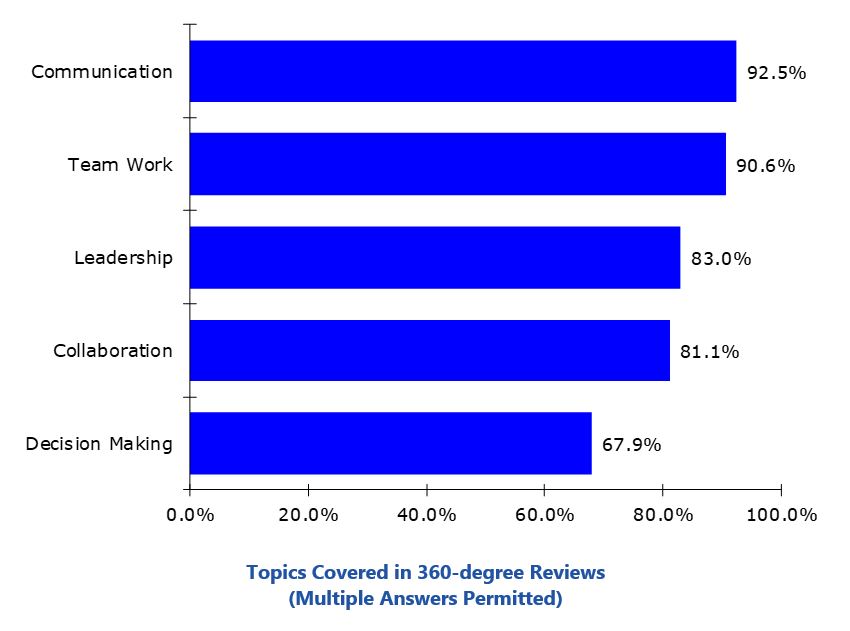 In this year’s survey, 52 percent of respondents reported that their managers do receive a 360-degree review. But not all these used the technique in the way in which it was designed to be. Eight percent of employees who reviewed their boss were not told that their input would be anonymous. Without this key feature, the technique loses its objectivity. Twenty-five percent of the respondents were not told who would see the report. For obvious reasons, this is important for the 360-degree review participants to know.

On the other hand, as the figure above shows, the scope of topics covered in these reviews was extensive at most companies. The survey also gave respondents the opportunity to write in other areas covered by the review. Areas also mentioned included: problem solving, dependability, job knowledge, initiative, key performance indicator achievement, ability to develop people, demonstration of company values, a self-assessment, and an open-door policy.

Seventy-four percent of respondents to the survey said that managers get trained in how to give employees feedback. The importance of providing timely and clear feedback were most frequently mentioned. 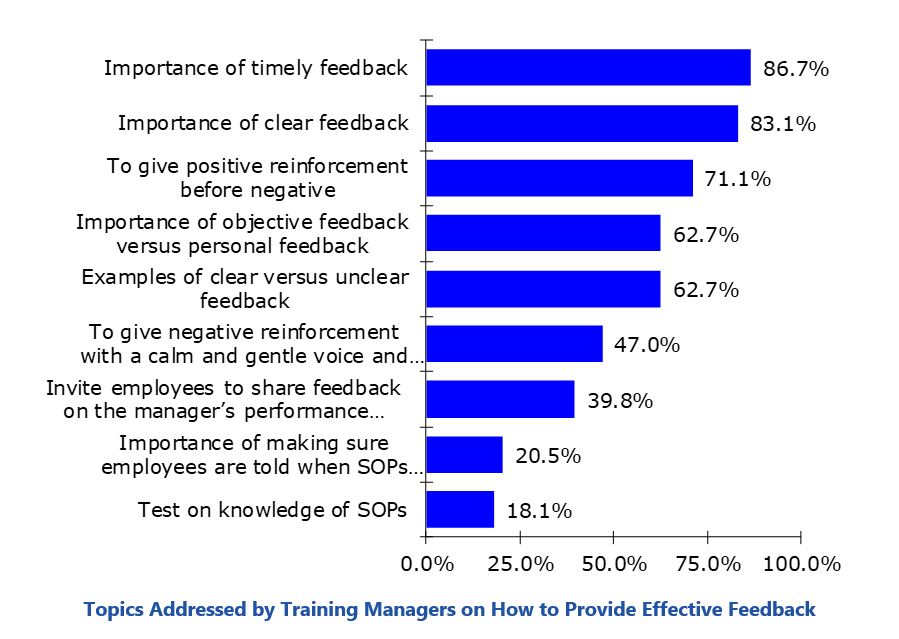 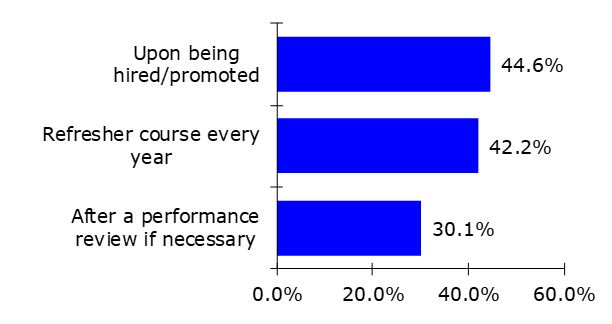 Sixty-nine percent of our respondents reported that workers are monitored at least once a month to make sure standard operating procedures (SOPs) and best practices are being followed. What was less impressive is that only 51 percent of respondents said their SOPs were fully documented. 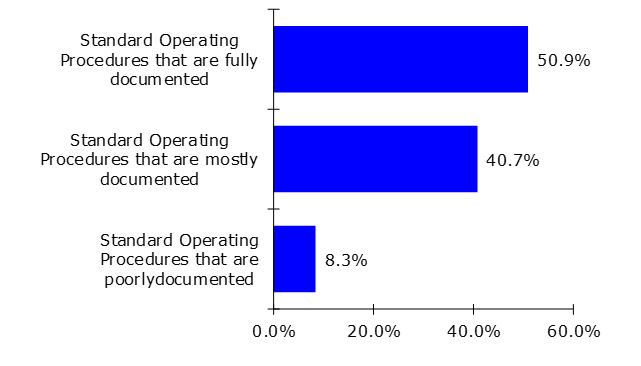 Further, companies too often report an inconsistent ability to document that feedback. 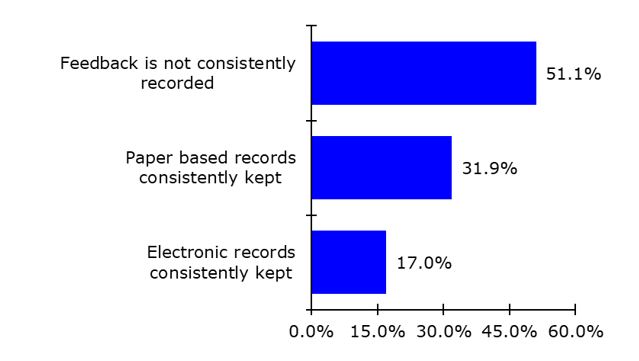 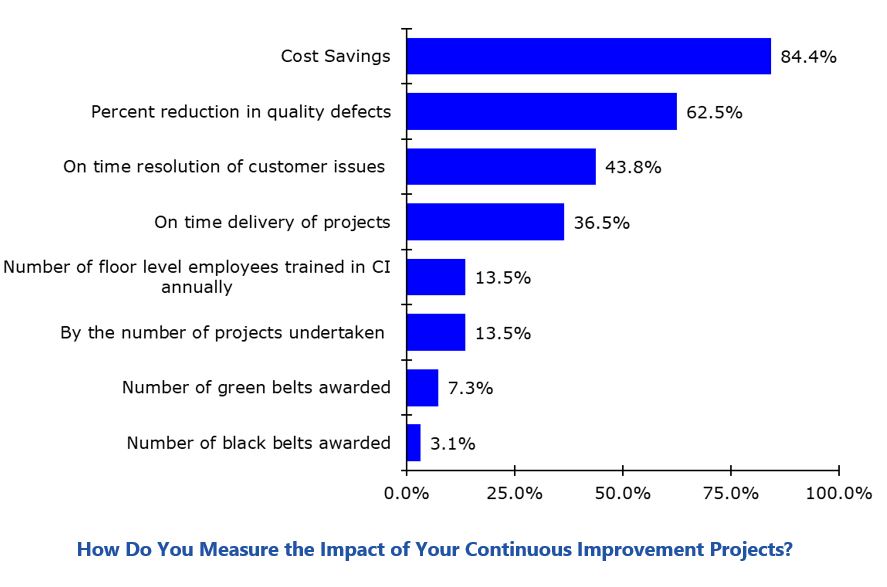 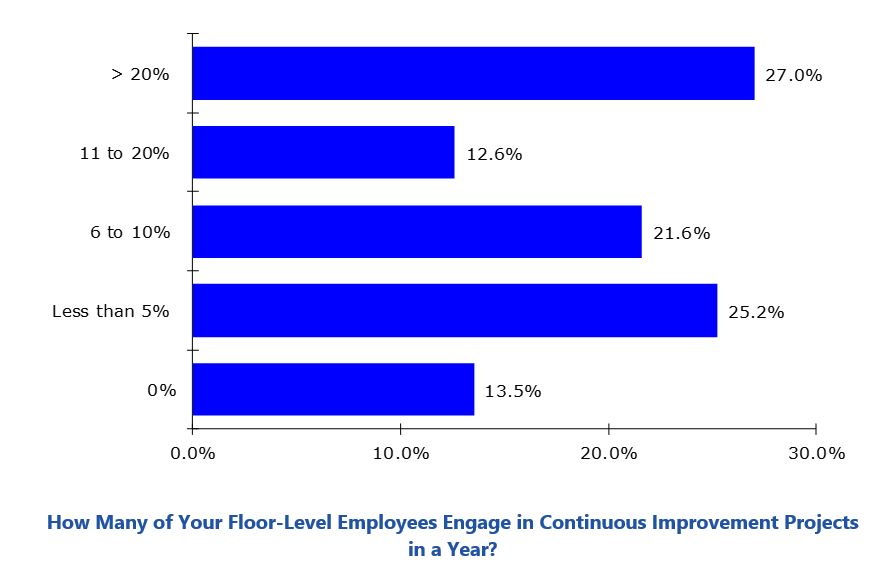 Subjecting managers to 360-degree reviews, training managers in how to give effective feedback, and providing feedback frequently and fairly are all practices associated with the best run warehouses. However, just because a company uses a management practice does not ensure that a warehouse will be well run!  Well-run warehouses employ these techniques significantly more often than less well-run warehouses. But clearly there are best practices associated with using these techniques. Just being able to say that a technique is used, without taking the time and effort to use that technique properly, may be a waste of effort.